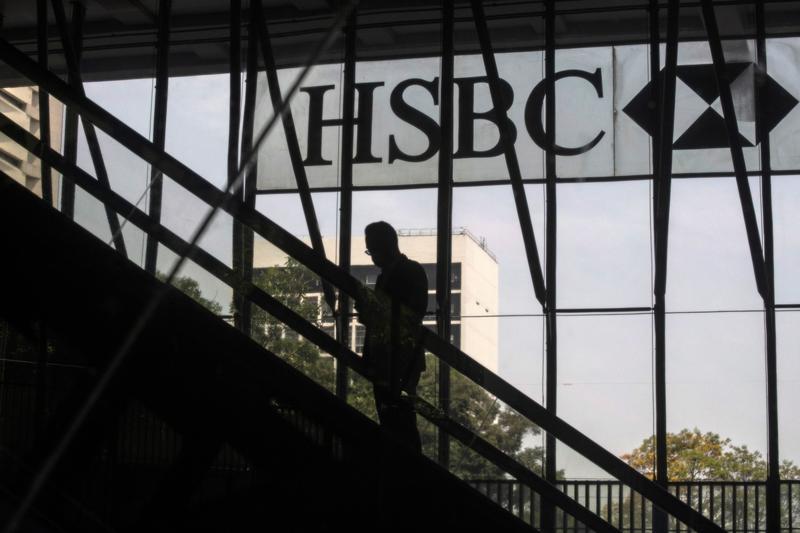 The silhouette of a person riding on an escalator is seen at the HSBC Holdings Plc headquarters building in the Central district of Hong Kong, China, on Monday, April 27, 2020. (ROY LIU / BLOOMBERG)

HSBC said 30 percent of its Hong Kong staff can return, according to a memo seen by Bloomberg News and confirmed by a bank spokeswoman.

ALSO READ: HK to ease virus curbs, reopen schools in stages from May 27

The Asian financial hub, which posted a record economic decline in the first quarter, last week moved to loosen curbs on social gatherings and reopen shuttered schools in stages

Goldman Sachs has been gradually ramping up returns and now has a third of its employees, or almost 600 people, back as of today, a spokesman said.

At Barclays, about 270 workers, or 60 percent of staff, are working from their offices, according to Anthony Davies, chief executive of the Hong Kong branch.

The Asian financial hub, which posted a record economic decline in the first quarter, last week moved to loosen curbs on social gatherings and reopen shuttered schools in stages. Hong Kong hasn’t reported a locally transmitted case in more than 20 days, and hasn’t seen a virus-related death since mid-March.

“In tandem with the resumption of normal business activities in Hong Kong, we will allow more colleagues to return to office starting next week and expect to continue this phased approach in the coming weeks,” according to the HSBC memo dated May 6.

Global banks with operations in Hong Kong are returning to their offices ahead of their European and North American colleagues, where virus cases and fatalities continue to mount, albeit at a slower pace.

Morgan Stanley plans to allow New York employees to start returning to work next month, while JPMorgan Chase & Co. said it doesn’t yet have a timeline for returning. JPMorgan joined other major banks in saying it may take a more cautious approach than local governments once it does start reopening.

London-based HSBC has more than 31,000 workers in Hong Kong, where it operates about 100 branches. All but two of the retail outlets have resumed operations as of Monday, the bank said.

Goldman Sachs plans to allow more workers to return this month, with about 50 percent of Hong Kong staff expected back by May 25, the spokesman said. The bank will pause there, pending a further review of the staffing policy.

Citigroup Inc, meanwhile, has almost a third of its workers, or 1,500 people, back in their offices in the city, up from 25 percent last week, while Morgan Stanley currently has more than 50 percent of its employees in the office, spokesmen at the banks said. The two firms said they plan to further increase the number of staff returning in coming weeks.

While bankers have said the work-from-home practice may outlast the virus in some forms, their employers are already planning to implement plans to gradually move staff back to the office over time.

At UBS Group AG, currently about 40 percent of Hong Kong staff have been working from their premises and the Swiss bank is discussing ways to gradually increase the number of employees returning to work.