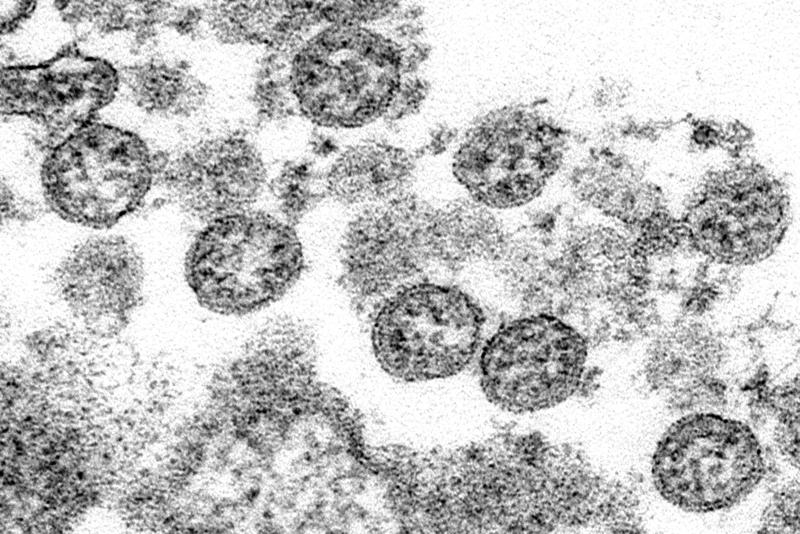 This 2020 electron microscope made available by the US Centers for Disease Control and Prevention image shows the spherical coronavirus particles from the first US case of COVID-19. (CS GOLDSMITH / A TAMIN / CDC VIA AP)

BEIJING - Officials and scholars around the world have recently stressed there is no scientific evidence to support Washington's repeated allegations that the novel coronavirus emanated from a research lab or a wet market in the Chinese city of Wuhan.

US Secretary of State Mike Pompeo on Sunday agitated for "significant evidence" on the virus' origin from Wuhan. However, he did not specify what the evidence is nor deliver any concrete proof to validate his claims.

The origin of the novel coronavirus behind the COVID-19 pandemic remains unclear, according to Army General Mark Milley, US chairman of the Joint Chiefs of Staff.

"Did it come out of the virology lab in Wuhan, did it occur in the wet market there in Wuhan or did it occur somewhere else? And the answer to that is we don't know," Milley told a press conference earlier this week.

Top US infectious disease expert and health official Anthony Fauci clarified that the current scientific evidence shows it is highly unlikely that the virus was manmade.

ALSO READ: Reality check: US allegations against China on COVID-19

"If you look at the evolution of the virus in bats and what's out there now, (the scientific evidence) is very, very strongly leaning toward this could not have been artificially or deliberately manipulated," he noted in an interview published on Monday by National Geographic.

The virus "evolved in nature and then jumped species" as "everything about the stepwise evolution over time" strongly indicated, said Fauci, director of the National Institute of Allergy and Infectious Diseases.

During a Senate hearing on Tuesday, Republican Representative John Ratcliffe failed to answer questions on the virus' origins purported by US President Donald Trump, who had nominated him as director of national intelligence, the country's top spy agency.

The US Intelligence Community (IC) has agreed to the wide scientific consensus that the COVID-19 virus was not manmade or genetically modified, according to a statement from the Office of Director of National Intelligence last week.

"The IC will continue to rigorously examine emerging information and intelligence to determine whether the outbreak began through contact with infected animals or if it was the result of an accident at a laboratory in Wuhan," the office said.

For its part, the World Health Organization (WHO) said that the Trump administration's claim on the virus' origin remains "speculative," as the organization had not received any data or specific evidence from the US side.

"If that data and evidence is available, then it will be for the United States government to decide whether and when it can be shared, but it is difficult for the WHO to operate in an information vacuum in that regard," Michael Ryan, director of the WHO's health emergencies program, told a virtual press briefing on Monday.

Kremlin spokesman Dmitry Peskov told CNBC on Tuesday that without proof, the US accusations on China for the virus' origin were serious and wrong, because the US government did not deliver any proof.

"We consider it not a proper time, being somewhere in the middle of a severe crisis, an unprecedented crisis, to try to blame everything on the international health organization (the WHO) or, the next day, on China," Peskov said.

Britain has also seen little evidence that the coronavirus is man-made, British Health Minister Matt Hancock was quoted by Reuters as saying.

READ MORE: China, US health experts vow to act together against COVID-19

The novel coronavirus spread extensively around the world since late 2019 and the single "Patient Zeroes" is absent in most countries, the latest study by the University College London Genetics Institute has shown.

"The results add to a growing body of evidence that SARS-CoV-2 (novel coronavirus) viruses share a common ancestor from late 2019, suggesting that this was when the virus jumped from a previous animal host, into people," the university said in a statement on Wednesday.

"This means it is most unlikely the virus causing COVID-19 was in human circulation for long before it was first detected," it added.