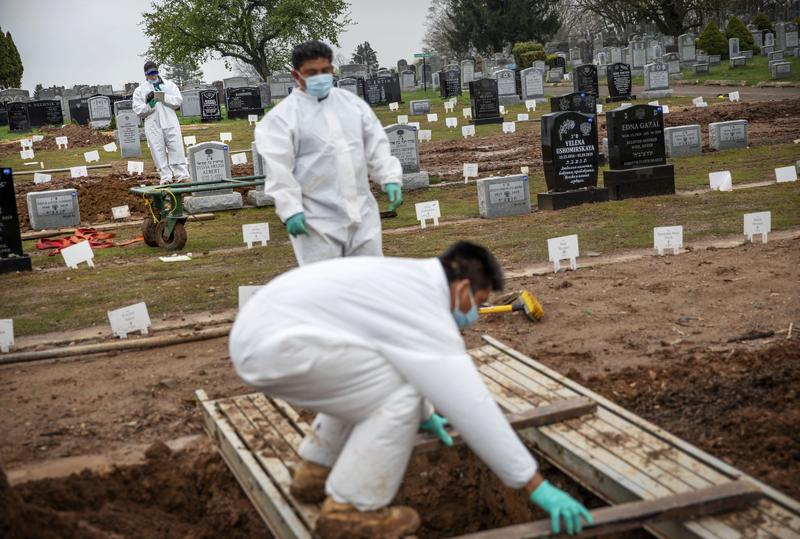 In this April 8, 2020 photo, a rabbi, background, finishes a prayer during a burial service as gravediggers prepare a plot for the next burial at a cemetery in the Staten Island borough of New York, United States. (DAVID GOLDMAN / AP)

WASHINGTON - With COVID-19 cases and deaths mounting daily, the US government has intensified attempts to fan the flames of anti-China rhetoric to divert attention from its direct responsibility for the crisis.

Instead of doing everything they can to save as many Americans as possible, President Donald Trump's administration and its supporters in Congress are working furiously to frame Beijing as the original culprit

The number of COVID-19 deaths in the country reached 66,369 as of Saturday night, with total infections at 1,132,539, according to the Center for Systems Science and Engineering (CSSE) at Johns Hopkins University.

Instead of doing everything they can to save as many Americans as possible, President Donald Trump's administration and its supporters in Congress are working furiously to frame Beijing as the original culprit and use China as a scapegoat for its own missteps.

ALSO READ: Experts caution against US being 'more aggressive' on China

The 57-page strategy document, obtained by Politico recently, includes advice on everything from how to tie Democratic candidates to the Chinese government to how to deal with accusations of racism.

The April 17 memo is focused on three main lines of assault -- China caused the virus "by covering it up," Democrats are "soft on China," and Republicans will "push for sanctions on China for its role in spreading this pandemic," Politico summarized.

Citing current and former US officials, The New York Times reported on April 30 that senior Trump administration officials pushed intelligence agencies to hunt for evidence to support a theory that a lab in Wuhan was the origin of the outbreak as the president escalated a public campaign to blame China for the pandemic.

But many scientists argue that the evidence tilts firmly toward a natural transmission -- a still-unknown interaction in late fall that allowed the virus to jump from a bat or another animal to a human.

There is "no scientific backing" for the two claims floated recently by some US politicians and media outlets that COVID-19 could be human-made and have escaped from a laboratory, said a report by Buzzfeed citing interviews with several scientists on April 22.

Vincent Racaniello, a professor of microbiology and immunology at Columbia University, told BuzzFeed that he wasn't even comfortable calling the idea that the lab was the source of the outbreak a theory. "A theory is based on results," he said. "I think it's driven by politics, frankly."

Jeremy Konyndyk, a senior policy fellow at the Center for Global Development, said there is currently no evidence that the coronavirus originated in a lab -- either as a deliberate creation or an accidental release.

World Health Organization (WHO) spokesperson Fadela Chaib told a news briefing On April 21 that "all available evidence suggests the virus has an animal origin and is not manipulated or constructed in a lab or somewhere else."

The US intelligence community "concurs with the wide scientific consensus that the COVID-19 virus was not manmade or genetically modified," the Office of the Director of National Intelligence (ODNI) said in a statement on April 30.

Jeffrey Sachs, a professor and director of the Center for Sustainable Development at Columbia University said in a recent opinion piece that the White House "will continue to fulminate against WHO and China and any other targets to distract attention."

"Yet the record is clear: China got the epidemic under control while the US did not. China implemented a strict national lockdown while the US did not. China deployed its top technologists and companies to do the job. In fact, Trump repeatedly praised China during February, only turning on China when the situation got tough in the US," Sachs wrote.