Mobilization to aid Wuhan during time of outbreak called crucial

By Cui Jia in Beijing and Liu Kun in Wuhan

Editor's note: This is the last story in a series of three that China Daily is publishing to share front-line experts' views on key issues in the novel coronavirus outbreak, including how China has managed to keep a low death toll. The telling of these stories might bring people more insight into how China and its people have gone through the darkest moments of the outbreak. 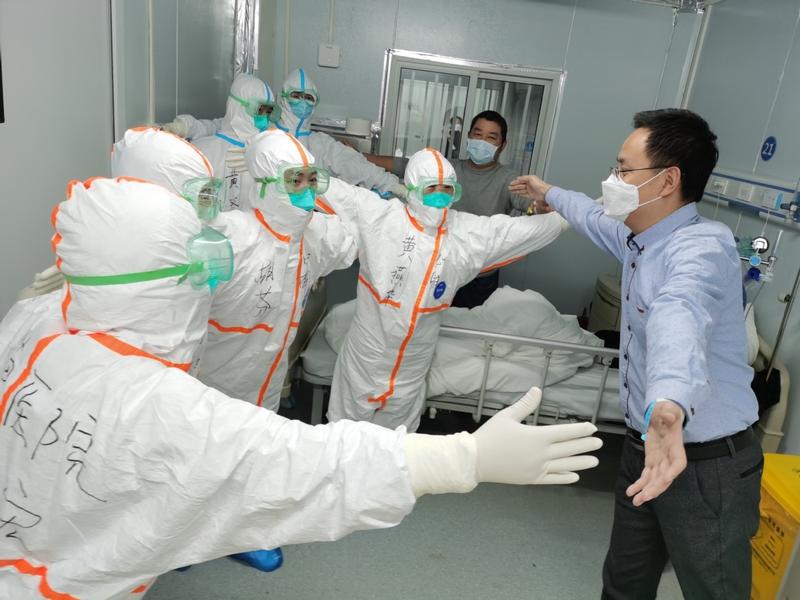 One of the first two patients to recover from COVID-19 at Leishenshan Hospital in Wuhan, Hubei province, bids farewell to doctors and nurses before being discharged on Feb 18, 2020. (GAO XIANG / FOR CHINA DAILY)

Zhang Dingyu, president of Jinyintan Hospital－a hospital specializing in infectious diseases and the first designated hospital for COVID-19 patients in Wuhan, Hubei province－vividly recalls the "toughest time" when employees at the hospital were struggling to save patients' lives and the mortality rate was high.

"We'd been treating patients in severe and critical condition since the very beginning. The mortality rate at the hospital reached about 10 percent at the early stage of the outbreak, which was around Jan 25 to 31. It was the toughest time," Zhang said during an exclusive interview with China Daily at the hospital in late April.

"It wasn't until the country mobilized all possible medical resources to aid Wuhan that the grim situation was turned and the mortality rate began to drop."

China has unique institutional advantages when it comes to social mobilization, said Jiao Yahui, an official with the National Health Commission. Such advantages ensured the government could send more than 42,000 medical workers from all over the country to Wuhan and turn public hospitals in the city into designated hospitals for COVID-19 in the shortest time to solve the pressing problem of medical resource shortages, Jiao said

On May 2, Zhang was promoted to be deputy director of the Hubei Health Commission. The 55-year-old suffers from amyotrophic lateral sclerosis, which causes him to walk with a limp. Many people were touched to see him walking around the hospital to attend to COVID-19 patients on TV and social media as he was clearly struggling himself.

Like most front-line medical workers, Zhang said the relatively high mortality rate at the beginning of the outbreak was due to overstretched medical resources that could hardly cope with the surging number of COVID-19 patients.

"Our hospital has about 700 medical workers, and they were overworked and frustrated. But the situation completely changed after the arrival of more than 800 additional medical workers from all over China to help us and the patients. Of course, we could provide quality treatment and care for the patients with all hands on deck. As a result, the mortality rate began to drop," he said.

By the end of January, Wuhan had already reported more than 10,000 confirmed and suspected cases, and the recovery rate was only about 14 percent. By March 28, the rate had climbed to 92 percent, according to the central work group guiding the anti-epidemic effort in Hubei.

Jiao Yahui, a National Health Commission official responsible for medical administration and supervision who spent about 80 days in Wuhan, said China has unique institutional advantages when it comes to social mobilization.

Such advantages ensured the government could send more than 42,000 medical workers from all over the country to Wuhan and turn public hospitals in the city into designated hospitals for COVID-19 in the shortest time to solve the pressing problem of medical resource shortages, she said.

"Wuhan is actually a city with rich medical resources, having many public hospitals each with more than 3,000 beds. When we requisitioned those hospitals, they complied unconditionally," Jiao said in an interview with China Daily in Wuhan in late April.

In some Western countries, hospitals with more than 800 beds are already considered large. Those countries have to requisition two or three such hospitals to provide the same number of beds that can be offered by just one hospital in Wuhan, she said.

Also, the Chinese government requisitioned exhibition centers and stadiums and quickly turned them into temporary hospitals for COVID-19 patients with light symptoms. By separating them from patients in a severe condition, medical resources could be better allocated to save lives and prevent patients' condition from deteriorating, she added.

"Such measures might not be possible in some other countries," she said. "But because of these measures, we've managed to keep the death toll low."

By the end of Monday, COVID-19 deaths on the Chinese mainland stood at 4,633, and the total infections reached 82,881, according to the National Health Commission.

The improvement in treatment methods has also helped China keep a low death toll, Zhang and Jiao both said.

On Feb 15, the world's first autopsy on a COVID-19 patient was conducted at Jinyintan Hospital. "The autopsies have helped us understand that the virus not only attacks the lungs, but also other organs such as the heart and kidneys as well as the circulatory system, so we have ensured that patients can receive multidisciplinary treatments," Jiao said.

"The use of blood plasma from COVID-19 patients at the recovery stage has also proved effective in treating patients in severe and critical condition, so the mortality rate dropped significantly when the supply of such blood plasma became sufficient," Zhang said.

Both Zhang and Jiao also said the use of traditional Chinese medicine has speeded up the patients' recovery time.

Zhang said that the mortality rate at his hospital has been lowered to around 6 percent thanks to the timely support and professional guidance, while the rate in Wuhan is about 7.7 percent.

On April 23, Zhang participated in a videoconference with medical workers at Assuta Ashdod Hospital in Israel. He shared the hospital's experiences in fighting the outbreak and how to protect medical workers. "I told them everything I know to help them get through the tough time. I know how much help they need because I've been through it here," Zhang said.