By Cui Jia in Wuhan 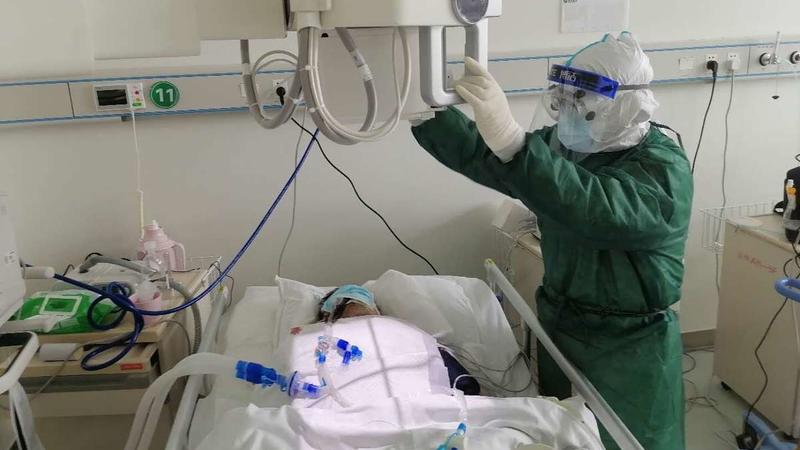 In this undated photo, a radiologist uses a portable X-ray machine to examine a novel coronavirus patient at an isolation ward of Tongji Hospital in Wuhan, Hubei province, China. (PHOTO PROVIDED TO CHINA DAILY)

The relatively low death toll of the novel coronavirus in China has been the result of enforcing decisive measures and mobilizing national resources to fight the disease, according to the deputy head of a hospital treating COVID-19 patients in Wuhan, Hubei province.

"The mortality rate of the disease in the early stage of the epidemic in Wuhan was actually quite high. The world should see that it was a gradual process for China to lower the rate to the current level as nationwide epidemic control measures have taken effect," said Tang Zhouping, deputy director of Tongji Hospital's Guanggu branch in Wuhan and a professor of neurology.

The mortality rate of the disease in the early stage of the epidemic in Wuhan was actually quite high. The world should see that it was a gradual process for China to lower the rate to the current level as nationwide epidemic control measures have taken effect.

Different countries are at different stages of the outbreak, so people should see the comparison of mortality rates within a bigger picture and over a longer range of time, Tang said in an exclusive interview with China Daily on Wednesday.

Wuhan has been the city hardest hit by COVID-19 in China. As of the end of Wednesday, of the 4,632 people who died of the virus on the Chinese mainland, 3,869 were from the city, according to the National Health Commission. By Wednesday, total infections on the mainland amounted to 82,798.

Tongji Hospital's Guanggu branch became a designated hospital for COVID-19 patients on Feb 5. As all patients have recovered or been transferred, its operation has returned to normal as of Monday.

Tang said the mortality rate of COVID-19 patients at the hospital was about 5 percent, and the hospital strictly followed the protocol of directly reporting suspicious and confirmed cases to the Chinese Center for Disease Control and Prevention. All doctors could report such cases from their workstations.

"As you can see, there is no alter or delete button in the filing system. Once it's filed, no one can change it. Also, there is no way for the local government to interfere with the process," Tang said, demonstrating the direct reporting system from a workstation.

Tang said that at the beginning of the outbreak, there was a time when they had two or three deaths at the hospital every day, which deeply worried medics.

"On the evening of Feb 7, the central government's work group decided to send 17 medical teams to aid us. On the morning of Feb 8, hospitals from all over China started to assemble teams and medical supplies, including ventilators and extracorporeal membrane oxygenation (ECMO) machines. And they were here by that night," he said. "I don't think any country can do it faster."

The doctors and nurses started to attend to patients on Feb 10. Tang said their goal was very clear: to increase the recovery rate and minimize the mortality rate at all costs.

"We still haven't calculated how much we've spent on saving COVID-19 patients because it's never our concern," he said, adding that all treatment for COVID-19 has been free for patients.

When officials from the World Health Organization visited the hospital to assess the epidemic, an official was shocked to see there were five ECMOs in the hospital alone while in certain countries, there is only one available in the entire country, Tang said.

"We had a COVID-19 patient who kept on falling into critical condition but revived several times. In some countries where conditions are limited, they might have given up on such a patient, but we didn't. The patient now has recovered," he said. "This is why our death toll is so low that it's almost unbelievable for some."

"Some politicians and people in Western countries keep questioning the accuracy of China's death toll and mortality rate, but their medics rarely have such doubts because they know how Chinese medics work and the support we get from the government," Tang said.

Also, some people naturally believe that China's medical technologies and medics' skills lag behind those in the West, so they assume that China isn't capable of keeping such a low death toll and infection numbers, he said.

"But containing an epidemic is more about how the central government, local government and people implement epidemic control measures rather than treatment methods that are relatively standardized," he said.

At the beginning, some people in Wuhan thought epidemic control measures such as putting the city under lockdown starting on Jan 23 and restricting their movement were too harsh. But now they fully understand that those measures saved many lives, now that the virus is ravaging the world, Tang said.