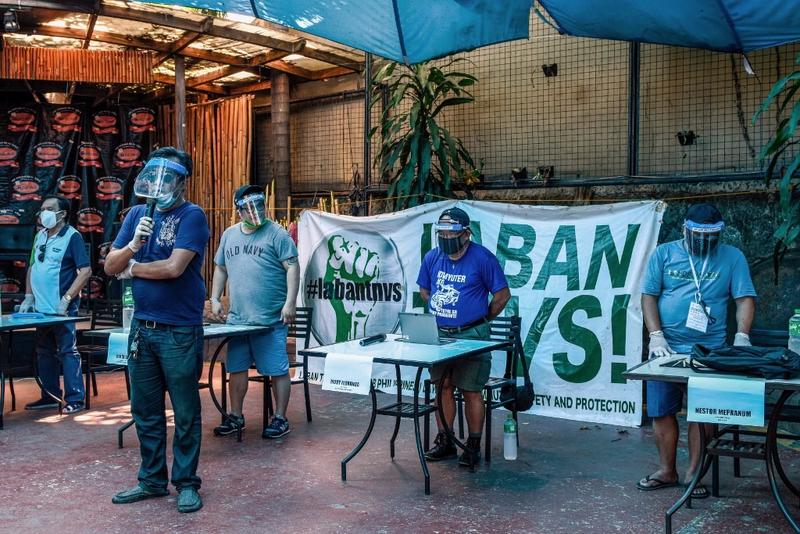 Members of a transport organisation hold a press conference to coincide with May Day, or International Workers' Day, in suburban Manila on May 1, 2020, to call on the government to help financially after public transport workers were hit hard from the enhanced community quarantine measures in place due to the COVID-19 coronavirus outbreak. (MARIA TAN / AFP)

DUBAI / ISTANBUL / CAIRO / AMMAN / RAMALLAH / JERUSALEM / NEW DELHI / MELBOURNE / BANGKOK / SEOUL / MANILA / TOKYO - All commercial flights in and out of the Philippines will be suspended beginning Sunday to help prevent the spread of the coronavirus, airport authorities said.

Cargo and maintenance flights, as well as those carrying medical supplies and other necessities, will be allowed to continue, the Manila International Airport Authority said on its Facebook account, citing a memo from the government’s COVID-19 task force.

Local carriers Philippine Airlines Inc and Cebu Air Inc have canceled flights until May 15, while some foreign airlines continued to fly passengers to and from the nation’s capital as of Saturday.

The number of coronavirus cases in the Philippines climbed to 9,223 after the Health Ministry reported 295 new infections on Sunday.

The ministry also recorded four more deaths related to COVID-19, the disease caused by the new coronavirus, bringing the tally to 607.

Another 90 people recovered, it added, bringing total recoveries to 1,214.

Australia’s state of Victoria saw its highest increase in new coronavirus cases in weeks on Sunday and New South Wales state struggled with a cluster of infections at an aged care facility, as parts of the country began easing distancing rules.

Thirteen new cases were recorded in Victoria on Sunday, health officials said, with six of the cases related to an infections cluster at a meat processing facility in Melbourne.

In New South Wales there were four new cases, two of which were recorded at the Newmarch aged care facility in Sydney, where more than 60 people have been infected and 14 have died.

Over the past week Australia recorded an average of only 13 new cases a day, according to the health ministry, with the daily rate of infections well below 1 percent, a fraction of what has been seen in many other countries.

There were 6,783 confirmed cases and 94 deaths in Australia as of late Saturday, according to health officials. Neighbouring New Zealand saw two new cases on Sunday, bringing the total to 1,136. Twenty people have died so far.

India's federal health ministry Sunday morning said 78 new deaths due to COVID-19, besides fresh 2,204 positive cases were reported since Saturday evening in the country, taking the number of deaths to 1,301 and total cases to 39,980.

According to ministry officials, so far 10,633 people have been discharged from hospitals after showing improvement.

Sunday marks the 40th straight day of ongoing lockdown across the country announced by the government to contain the spread of the pandemic.

The lockdown which was announced on March 25 was Friday evening again extended for the third time for two more weeks until May 17. 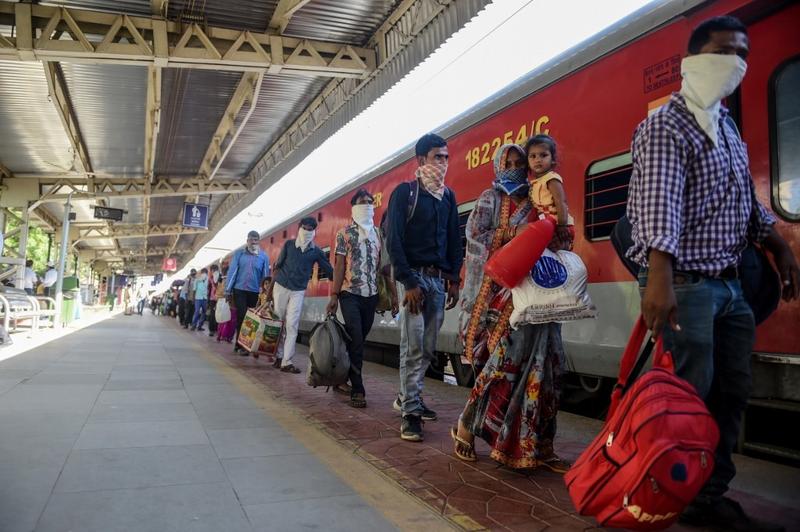 Migrant workers queue to board a special train going to Agra in Uttar Pradesh state during a government-imposed nationwide lockdown as a preventive measure against the COVID-19 coronavirus, at Sabarmati Railway Station on the outskirts of Ahmedabad on May 2, 2020. (SAM PANTHAKY / AFP)

Iran’s death toll from new coronavirus increased by 65 over the previous 24 hours to reach 6,156 on Saturday, Health Ministry spokesman Kianush Jahanpur said in a statement on state TV.

Iran plans to reopen mosques and schools in areas that have been consistently free of the coronavirus as President Hassan Rouhani’s government starts to ease restrictions that were aimed at containing the outbreak.

The total number of diagnosed cases in Iran, one of the Middle Eastern countries hardest hit by the pandemic, has reached 96,448, up by 802 in the past 24 hours, the lowest daily increase rate in weeks, he said, adding that 2,787 were in critical condition.

Iranian health officials have been warning of a new wave of the disease if health regulations are not strictly followed.

The Israeli Ministry of Health reported 84 new coronavirus cases on Saturday, bringing the total number to 16,185.

According to the ministry, 437 recoveries were recorded on Saturday, more than five times the number of new patients, raising the total number of recoveries to 9,593.

The number of death cases rose from 225 to 229, while the number of patients in serious condition increased from 103 to 105, out of 304 patients currently hospitalized.

Also on Sunday, the Israeli government is expected to discuss the lifting of other restrictions, which will allow reopening of shopping malls, parks and universities.

Japan could ease some of the current coronavirus-related curbs on economic activity by allowing places such as parks and museums to reopen, provided proper preventive measures were in place, Economy Minister Yasutoshi Nishimura said on Sunday.

The remarks come a day before the government is set to announce the extension of its state of emergency after struggling to suppress the spread of the novel coronavirus that has infected 15,589 people and killed 530 in the country.

“As long as the proper preventive measures are in place, it could be possible to ease some of the current restrictions on economic activities,” Nishimura said at a news conference held on Sunday morning.

Places like parks, museums, art galleries, and libraries could reopen even in the 13 prefectures where the coronavirus has spread rapidly, if they take steps to disinfect their premises and ensure visitors maintain their distance, he added.

Further details on how restrictions might be eased would be discussed at an expert’s meeting on Monday, Nishimura said.

Jordan said on Saturday a new death case of COVID-19 was reported, increasing the overall number of fatalities to nine in the country, said the health minister.

Jordan's Health Minister Saad Jaber said in a statement that only one infection was recorded Saturday, a truck driver at the border, bringing the overall number of confirmed cases in Jordan to 460.

The minister said the new death case is a 73-year-old patient who was receiving treatment at the state-run Prince Hamzah Hospital, and was suffering from chronic illness.

He noted most of the cases have recovered and were discharged from the hospital.

The minister added that more than 3,000 coronavirus tests were conducted Saturday, increasing the overall number of tests conducted from late February to date to exceed 80,000.

Palestine declared on Saturday that three new cases of COVID-19 were found in East Jerusalem neighborhoods, bringing total cases to 520.

In Turkey, a total of 58,259 people have so far recovered from the new coronavirus, which causes the respiratory disease COVID-19

The number of recovered patients has risen to 103, 44 of whom are in East Jerusalem, 12 in the Gaza Strip and 47 in the West Bank.

The minister noted that the authorities have carried out 33,800 tests for the novel coronavirus in Palestine since the outbreak of the pandemic.

Almost 15,000 Palestinians are currently under house quarantine in various areas of the occupied territories, according to official data.

Most of the new cases are among migrant workers living in dormitories, the ministry said.

Singapore will progressively ramp up its manufacturing activities, its minister of trade and industry said on Sunday, with the city-state looking to restart its economy as coronavirus curbs start to ease over the next few weeks.

Sectors that are intertwined with the global supply chain such as biopharmaceutical and petrochemicals as well precision manufacturing will be among priority sectors, Chan Chun Sing told reporters.

Only about 17 percent of Singapore’s labour force is currently working onsite to maintain essential services and support for global production chains and connectivity.

South Korea will further relax social distancing rules starting on May 6, allowing a phased reopening of businesses, as the nation has largely managed to bring the coronavirus outbreak under control, Prime Minister Chung Sye-kyun said on Sunday.

The government “will allow businesses to resume at facilities in phases that had remained closed up until now, and also allow gatherings and events to take place assuming they follow disinfection guidelines,” he told a televised meeting of government officials.

Thailand reported three new coronavirus cases and no new deaths on Sunday, as the country started lifting restrictions on some businesses and aspects of life.

Thailand has seen a total of 2,969 coronavirus cases and 54 deaths since the outbreak began in January.

New daily infections have stayed in the single digits for a week. The government has allowed some businesses and public parks to reopen on Sunday, as well as resumed alcohol sales.

Turkish police officers, wearing face masks to protect against coronavirus arrest a demonstrator during May Day protests in Istanbul, May 1, 2020. (EMRAH GUREL / AP)

The number of people who have died from COVID-19 in Turkey has risen by 78 in the last 24 hours to 3,336, with 1,983 new cases of the virus, Health Ministry data showed on Saturday.

The total number of cases rose to 124,375, the data showed, the highest total outside Western Europe or the United States, and slightly more than Russia.

A total of 58,259 people have so far recovered from the new coronavirus, which causes the respiratory disease COVID-19. The number of tests conducted in Turkey in the past 24 hours stood at 36,318, raising the total number of tests during the outbreak to more than 1.1 million. 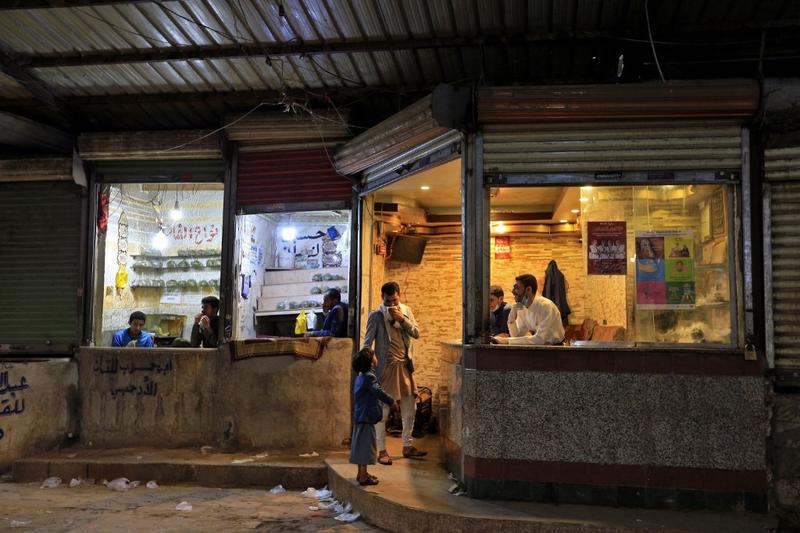 A Yemeni man buys qat, the ubiquitous mild narcotic, at a market in the capital Sanaa on May 1, 2020. (MOHAMMED HUWAIS / AFP)

Yemen has reported three new coronavirus cases, two in Aden city and one in Taiz province, the national emergency coronavirus committee said on Saturday, raising the number of diagnosed infections in the war-town country to 10 with two deaths.

The United Nations says it fears the coronavirus could be spreading undetected among an acutely malnourished population with inadequate testing capabilities.

The virus has been diagnosed in three provinces in the vulnerable country which has been mired in conflict for more than five years.

The new case in Taiz had been in contact with the southwestern province’s first infection which was announced on Friday, the emergency coronavirus committee said in a Twitter post.

Yemen recorded its first case of COVID-19 in southern Hadhramout province on April 10. On Wednesday, it announced five infections in Aden, with two deaths.