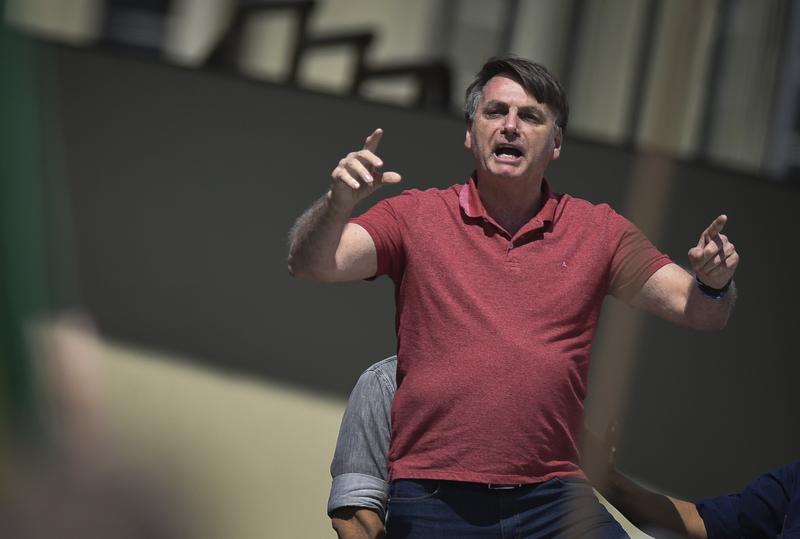 Brazil's President Jair Bolsonaro speaks to supporters during a protest asking for military intervention in front the army's headquarters during the new coronavirus pandemic, in Brasilia, Brazil, April 19, 2020. Bolsonaro came out in support of a small protest Sunday that defended military intervention, infringing his own ministry's recommendations to maintain social distancing and prompting fierce critics. (ANDRE BORGES / AP)

Brazil has more cases of the new coronavirus than any other country in Latin America. On Sunday, confirmed cases rose to 38,654 with 2,462 deaths.

Bolsonaro, who was not wearing a face mask, addressed a crowd of a few hundred in Brasilia, many of them wearing Brazil’s yellow-and-green soccer jersey.

His brief address, which was punctuated by the president coughing, touched on talking points that have become his usual rallying cry.

He called those in attendance “patriots” and said they were helping defend individual freedoms that he said are under threat by lockdowns imposed by authorities at the state level.

“Everyone in Brazil needs to understand that they are subject to the will of the people,” Bolsonaro said.

Protesters in Brasilia chanted slogans against the country’s Supreme Court, which has upheld state-organized lockdowns, and against Congress, whose opposition lawmakers have also defended quarantines.

Some of the protesters also called for a return to authoritarian measures used during Brazil’s last military regime, known as AI-5.

In Sao Paulo, Brazil’s richest and most populous state, Bolsonaro supporters have been demanding that governor Joao Doria resign because he has been a staunch supporter of shelter-in-place measures.

“The people cannot die of hunger,” one protester told Reuters.