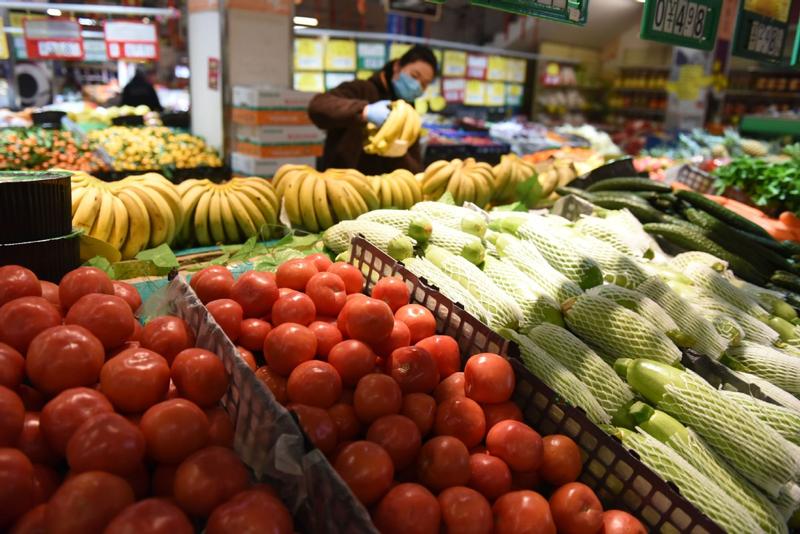 A consumer buys fruit at a supermarket in Fuyang, East China's Anhui province, on March 10, 2020. (LU QIJIAN / FOR CHINA DAILY)

China's consumer price index (CPI), the main gauge of inflation, grew 4.3 percent year on year last month, moderating from the 5.2-percent gain in February, according to data from the National Bureau of Statistics.

Compared with the same period last year, food prices remained elevated due to the novel coronavirus outbreak, rising 18.3% year on year and contributing 3.7 percentage points of the index's yearly growth

On a monthly basis, consumer prices went down 1.2 percent. Food prices, which account for nearly one-third of weighting in China's CPI, headed down 3.8 percent last month.

In breakdown, grain and oil prices were stable, while vegetable prices fell 12.2 percent over rising supplies in spring. Pork prices started to soften as the government took measures to boost supplies to mitigate the impacts of the African swine fever and the coronavirus epidemic.

Prices of the staple meat in China dropped 6.9 percent from a month earlier.

In the first quarter, CPI went up 4.9 percent year on year on average.

The rate eased from the 5.2-percent growth for February.

On a month-on-month basis, the PPI fell 1 percent last month.

In the first quarter of 2020, the PPI on average inched down 0.6 percent from the same period of last year.

Factory prices of capital goods decreased 2.4 percent year on year in March, widening from a 1-percent decline in February.

Among major industries, prices for oil and natural gas extraction saw the fastest retreat in March, plunging by 21.7 percent year on year.

Prices for processing of oil, coal and other fuel slumped 10.6 percent year on year, while those of chemical raw materials and chemical products manufacturing went down 5.3 percent over one year ago in March.