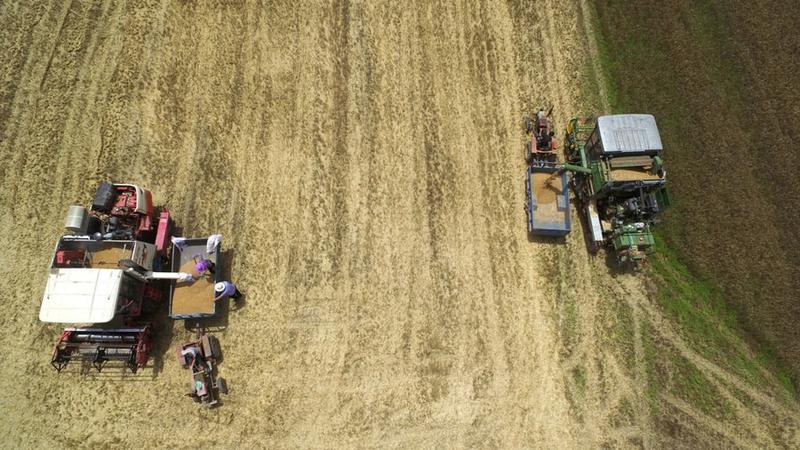 In this May 27, 2018 photo, farmers harvest wheat in Zhumadian in central China's Henan province. (PHOTO / IC)

China has ample food production and grain reserves despite the novel coronavirus impact, so there is no need to hoard groceries, officials have said.

The country has recorded a long streak of bumper years, with the annual grain output being stable and reaching more than 650 billion kilograms for five consecutive years, Wei Baigang, an official with the Ministry of Agriculture and Rural Affairs, said on Saturday.

The grain reserves per capita is 470 kg, and stocks of wheat and rice are sufficient enough to meet the country's consumer market demand for one year.

The grain reserves per capita is 470 kg, and stocks of wheat and rice are sufficient enough to meet the country's consumer market demand for one year

"Therefore, the amount and price of food are stable and there is no need to hoard it," he said at a daily news conference.

The recent pandemic has sent world food prices soaring and made food security a heated issue in the world, but it should be treated calmly and rationally, Wei said.

The current world food supply was sufficient at about 3.47 billion metric tons in 2019－excluding soybeans－with a demand of 2.67 billion tons. At the end of last year, there were still nearly 800 million tons of food stock, he said, adding that the recent spike in global prices was more driven by consumer panic.

Because China relies mainly on its domestic grain production－only 2 percent of the nation's grain is imported－the global price increase has had very limited impact on China's food prices, Wei said in response to concerns over whether some countries' grain export ban would strain China's grain supply.

"China has sufficient wheat and rice stocks. Once the grain market fluctuates, our country has measures to control it and is fully capable of coping with external influences."

Pan Wenbo, another official with the ministry, said the country has already issued a series of supportive policies to boost grain production, and "we have the confidence and determination to keep our rice bowls full".

He said China has unveiled a series of "unconventional measures" to stabilize grain production and ensure it for the whole year.

Wang Bin, an official at the Ministry of Commerce, also said that China's successive bumper harvests have contributed to ample food reserves and stable prices in the long term, and "the country's stocks of three major staple foods－wheat, corn and rice－will not suffer from supply shortages without imports".