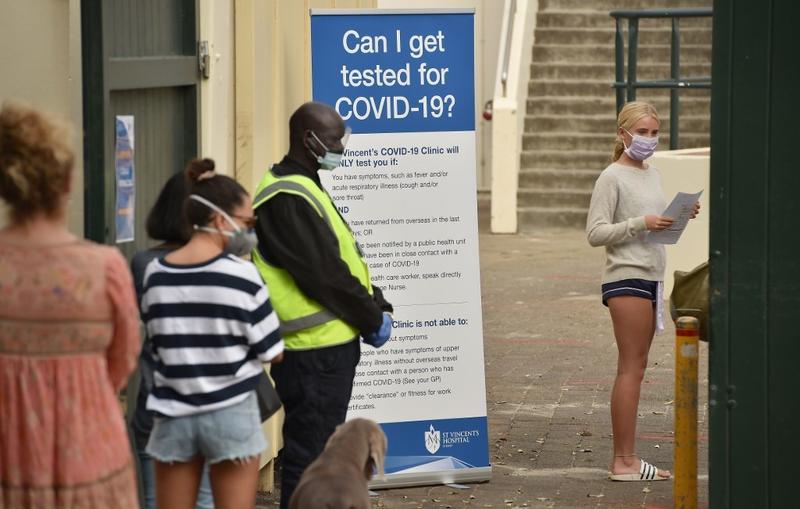 People line up at a COVID-19 coronavirus testing station at Bondi Beach in Sydney on April 1, 2020. (PETER PARKS / AFP)

SYDNEY — Australia on Thursday announced free childcare for six months as part of a bid to keep businesses operating through the coronavirus pandemic, as data on new infections supported early signs of “flattening the curve.”

We will demonstrate to the world here in Australia how such societies can deal with these sort of challenges our way, the Australian way

The childcare centre subsidy adds to a growing list of support packages worth some A$200 billion (US$121 billion) for airlines to mall owners as the government attempts to “hibernate” the Australian economy, to be reawakened when the crisis has passed.

“We will demonstrate to the world here in Australia how such societies can deal with these sort of challenges our way, the Australian way,” Morrison said during a televised press conference. “So stay positive, Australia. Stay connected, stay strong. We will get through this together.”

Morrison and state officials have introduced unprecedented restrictions on public movement to stop the spread of the virus and said that data on new infections continued to show those efforts were paying off.

Australia has reported around 5,200 infections and 25 deaths, with daily increases in new cases dropping to single digits from between 25 percent and 30 percent two weeks ago.

“The curve is beginning to flatten,” Health Minister Greg Hunt said. “It isn’t sustained yet, it hasn’t been consolidated, but those early, important signs are absolutely critical.”

Morrison said on Thursday the country’s testing rate was now more than 1,000 tests per 100,000 people, or 1 percent of the population.

has been able to exceed that mark,” Morrison said.

Childcare centres have lost significant business in recent weeks as thousands of people shifted to working at home, or were made redundant.

Morrison said the subsidy would keep about 13,000 childcare centres open by paying them A$1.6 billion over the next three months. The full subsidies will last for six months, when they will be reviewed.

Keeping the centres open would also allow critical workers from medical professionals to cleaners and food deliverers to continue to work, Morrison said.

Australia has ordered the shutdown of restaurants, cafes, bars, movie theatres and instructed people to stay inside unless they are shopping for food or taking their daily exercise as it tries to contain the flu-like illness.

The restrictions are expected to push the country’s A$2 trillion economy into its first recession in almost three decades and lift unemployment to double figures.

Australia was also dealing with the fate of around a dozen cruise ships it has banned from docking at its ports after disembarking passengers and crew became the country’s biggest single source of coronavirus infections.

A military-style operation was planned to airlift doctors onto eight cruise ships floating off the NSW coast which were refusing orders to leave Australian waters, to conduct health checks on nearly 9,000 crew members, local media reported on Thursday.

The Maritime Union of Australia said there were 11 foreign-owned cruise ships in limbo in Australian waters, with 11,000 crew members in total, and their situation was “an emerging humanitarian crisis”.

State governments, meanwhile, began putting time limits on the use of police to enforce restrictions on personal movement intended to slow the spread of the illness, including fines of up to to A$11,000 (US$6,672) and prison time of up to six months.

Authorities themselves have referred to the measures as “draconian” but necessary. In New South Wales, the country’s most populous state, officials said the rights of police to enforce penalties would initially last for 90 days.

“People will have gotten the message by then, hopefully,” NSW Police Commissioner Mick Fullter said. “And we won’t be talking about the powers, we’ll be talking about what does it look like coming out of this?”

In Victoria, the second most populous state, officials said policing of the social distancing policies might last until at least June.