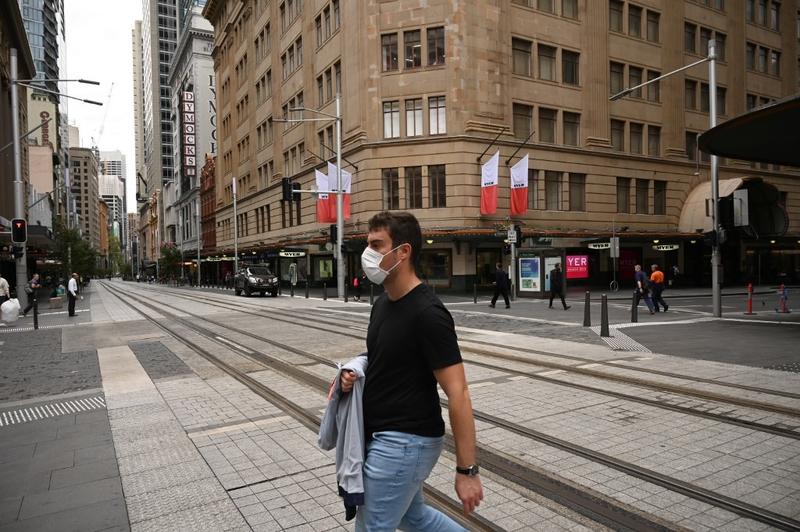 A man wears a mask on a near-deserted street in the central business district as people stay home due to the COVID-19 novel coronavirus outbreak in Sydney on March 30, 2020. (PETER PARKS / AFP)

Australians are slowly coming to terms with the fact that life will never be the same as the country adjusts with the reality of COVID-19.

Not just facing a health crisis, the nation is entering an economic crisis as well as Australians lose their jobs and the economy closes

Not just facing a health crisis, the nation is entering an economic crisis as well as Australians lose their jobs and the economy closes.

On March 30 the government announced an AUD$130 billion ‘job keeper’ program in which workers (full and part-time) will be paid AUD$1,500 a fortnight for the next six months.

So far, the government has pumped US$320 billion into the economy or roughly 17 percent of gross domestic product.

The government on March 29 tightened its social order rules restricting gatherings outside the home to just two people. People over 70 have been asked to stay at home while the military has been mobilized to back up police throughout the country.

Australians lucky enough to make it home are taken from the airport to hotels where they are put into self-isolation for 14 days.

Beaches and parks are empty, towns and cities around the country are deserted, sporting events have been canceled, businesses have shut down and unemployment is skyrocketing. The military is now helping police ensure that people obey the new social order rules – to self-isolate, keep off the streets unless absolutely necessary and practice ‘social distancing’ where people must keep at least four metres apart.

Police around the country have now been given the authority to issue fines for anyone breaking the rules on the spot.

Australians are living in fear that hundreds if not thousands will die if they do not follow the rules set down by the government and health experts who rely heavily on mathematical modelling for their predictions.

Various government spokespeople have predicted Australia could see more than 150,000 deaths before the pandemic is over.

Professor Raina MacIntyre, who heads the biosecurity program at the Kirby Institute at the University of New South Wales in Sydney, said in a hypothetical worst-case scenario that Australia could exceed China’s COVID-19 death rate.

She told China Daily: “We must do everything to protect our people … I hope Australia has learned from China that it is possible to control a COVID epidemic.”

One of the main concerns of frontline medical staff in Australia is the lack of basic personal protective equipment (PPE) such as face masks.

In an open letter to the prime minister, healthcare workers of Australia said: “We need sufficient supplies of adequate PPE and we need it now, before the system collapses.”

“The COVID-19 pandemic is here in Australia and we are simply ignoring the difficult lessons learned by our colleagues in Italy, China, and elsewhere.”

“We know there are supply chain issues. The health minister admitted it in Parliament. We need to start manufacturing PPE here in Australia and stop relying on overseas manufacturers … We are in a war and this calls for wartime measures,” the letter said.

Professor Ben Fahimnia, chair of Decision Sciences at the University of Sydney Business School, said: “Australia has had decades of offshoring and outsourcing manufacturing to countries where labor is cheap, especially China.”

“But the consequence is that we are not prepared for emergencies and supply chain disasters like what we face today,” he told China Daily.

“The coronavirus pandemic is an opportunity for Australia to rethink the idea that offshoring is the best way to operate.”

The state premiers and Prime Minister Scott Morrison, who was heavily criticized for his poor performance during the summer of bushfires, are struggling to keep the nation’s economy afloat.

Morrison is facing the biggest challenge of any Australian prime minister since World War II.

Morrison did establish a national cabinet, including all state and territory leaders, the first in Australian history, and has announced significant support for business, workers and those thrown out of work – all up, worth A$189 billion, or almost 10 percent of GDP.

Bill Bowtell, who led Australia’s response to the HIV/AIDS crisis in the 1990s, has slammed government responses as far too slow, uncoordinated and timid.

Dr Sanjaya Senanayake, an infectious diseases specialist at Australian National University, said: “If we have learned anything from the China experience, it is that lockdowns work.

“Yes, they may have been severe (the lockdowns), but in doing so, China managed to turn the problem around in two to three weeks.

“That’s probably the main lesson for us and indeed globally,” he told China Daily.

Senanayake said the Australian government is doing reasonably well in tackling COVID-19 when compared to other countries.

“The death rate is still less than 1 percent of those with the virus. The hard part is getting people to take the social distancing and self-isolation seriously.

“But it would appear we may be getting on top of it,” he said. “The worst thing that could happen is for us to become complacent.”

Social researcher Rebecca Huntley said she doesn’t want to criticize the government, but past research shows that people look for “hard and fast” rules in times of crisis.

“Australia was too slow in the early days of the crisis about the need for behavior change. The messages around hygiene and social distancing should have been ‘carpet-bombed’ even before we had significant cases,” she said.