Smoking diners to take it outside as Tokyo ban kicks in 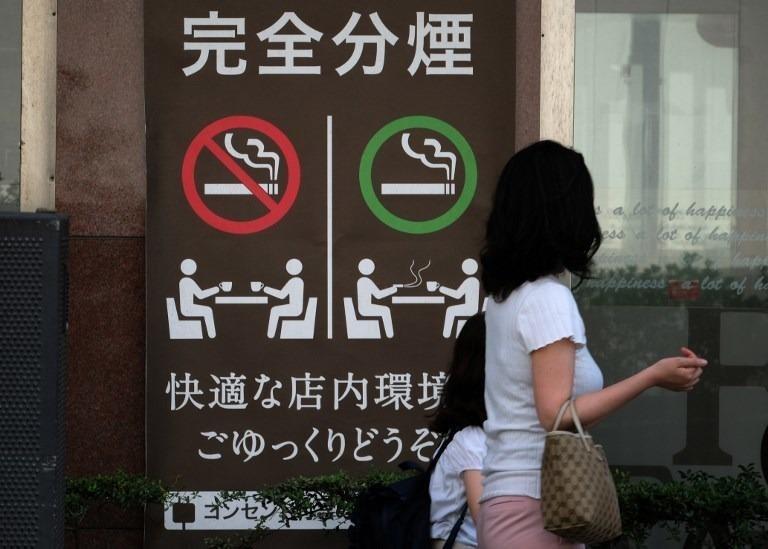 In this June 27, 2018 photo, a mother and her daughter walk past a coffee shop displaying a sign saying 'Complete separation of smoking areas: Non-smoking and Smoking' in Tokyo. (KAZUHIRO NOGI / AFP)

TOKYO - Patrons of Tokyo restaurants and bars will be able to light up indoors for the last time on Tuesday as one of the world’s most cigarette-friendly cities starts enforcing anti-smoking laws from April 1.

Less than a fifth of Japanese still smoke, down from about half the population half a century ago, but cigarettes are widely available and affordable

Japan lags behind many countries in its efforts to reduce tobacco usage, and the ban - just in Tokyo - only applies to traditional cigarettes, not so-called “heat not burn” devices for which Japan is the world’s biggest market. E-cigarettes that use liquid nicotine are banned.

The ban was part of Tokyo’s preparations for the now-delayed 2020 Olympics, and covers establishments with hired employees, meaning many of the family-owned-and-operated bars and restaurants that the city is famous for are exempt.

It took two years for the ban to come into effect - parliament approved the law in 2018 along with other national anti-smoking legislation - highlighting the hurdles anti-smoking activists face in a country where the biggest tobacco maker, Japan Tobacco, is one-third owned by the government and its products provide substantial tax revenue.

“This year’s law is still not sufficient,” politician and anti-smoking campaigner Shigefumi Matsuzawa told Reuters. “We had to set many compromises in order for it to pass, so there are several loopholes.”

Less than a fifth of Japanese still smoke, down from about half the population half a century ago, but cigarettes are widely available and affordable: A pack of 20 costs around 500 yen (US$4), a third of the price in fellow Group of Seven member Britain. Activists say second-hand smoke kills around 15,000 people a year in Japan, many of them women and children.

Kenji Ogura, a senior vice president at Japan Tobacco, expected the ban to have an impact on sales at a “certain level” but did not give any details. Japan Tobacco has been struggling to make its heated tobacco devices more popular than those by rival Philip Morris International Inc, and last year cut its profit outlook for this financial year.

Smokers like 30-year-old Daiki Watanabe said the law would do little to change habits. “Human will is a weak thing,” he said. “I don’t want to stop. If I am able to smoke, I will.”

But several restaurants, worried about losing customers, have built designated smoking areas. “For customers who don’t smoke, we have listened to their voices,” said Akihiro Funyuu, manager of a Tokyo izakaya, or bar. “But here, we’ve created a smoking room to listen to the smokers’ voices too.”

The law takes effect as Japan is battling a coronavirus outbreak that has so far infected more than 2,000 people and killed 59.

The WHO has said tobacco users are likely to be more vulnerable to being infected by the virus, but for smokers like Ryo Okumura, that’s not enough of an incentive to quit.