By Yan Dongjie and Han Junhong in Changchun 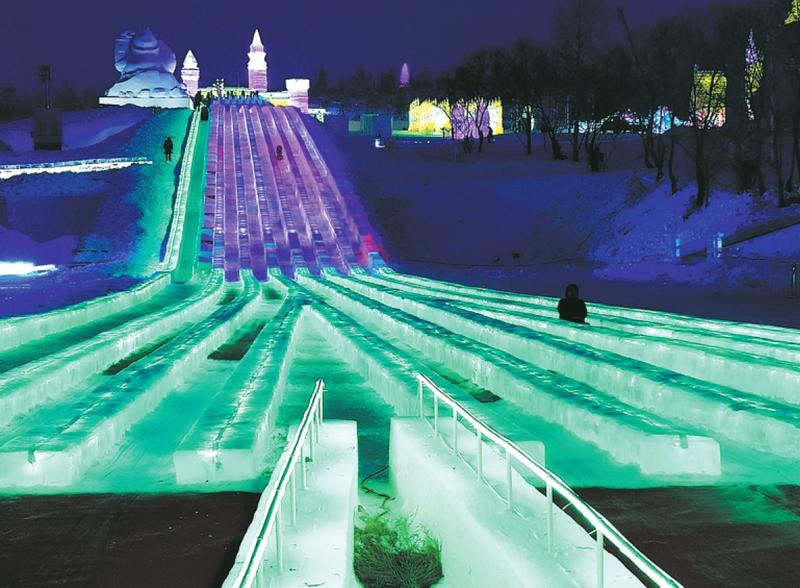 The Changchun Ice and Snow World is a new attraction for those looking for some fun in a cool environment. The park is home to a 420-meter-long slide made of ice and snow. (PHOTO PROVIDED TO CHINA DAILY)

A winter wonderland, which is already a hot destination, was created in just over two weeks in December in Changchun, capital of Jilin province. A total of 5,000 people worked continuously in shifts and completed the construction of an ice and snow amusement park.

A 21-meter-high Olympic torch building and a 420-meter-long slide, both made from ice and snow, are awaiting certification from the Guinness World Records as the world's highest building of its kind and the longest slide, respectively.

They are among the 130 pieces of ice and snow structures on display at the Changchun Ice and Snow World.

Built with more than 300,000 cubic meters of ice and snow, the 1.08-million-square-meter park is the first of its kind large-scale winter park in the province.

Planned in October, work began in early December and opened at the end of the month. The snow park reflects the city's determination to turn itself into a winter tourism destination and be more than a transportation hub.

"Thanks to the 2022 Winter Olympics, we believe Jilin's ice and snow industry will achieve fast growth, and Jilin will be a world-class ice and snow tourism destination," says Bayin Chaolu, Party secretary of the province.

With the approaching of the 2022 Winter Olympics, which will be hosted in Beijing and Zhangjiakou of Hebei province, the government has introduced various measures to encourage "300 million people to join in ice and snow sports".

Jilin, although not a host venue for the Winter Olympics, aims to play its role and promote its winter industry.

"We believe that with the construction of the Ice and Snow World and other winter projects in Lianhua Mountain area in east Changchun, the city will top people's winter travel list," says Chen Yan, vice-general manager of Jilin Provincial Construction Group Co Ltd, the company that built the park.

Changchun is located at the center of the three provinces in Northeast China. Chen says the city has been a transportation hub for visitors to places such as the hot springs in Changbai Mountain, the "frost" spectacle in Jilin city, Snow World in Harbin, and many ski resorts in the past.

The Changchun Ice and Snow World is a new attraction for those looking for some fun in a cool environment. The park is home to a 420-meter-long slide made of ice and snow. (PHOTO PROVIDED TO CHINA DAILY)

Changchun is an ideal tourist destination because of its convenient transportation and mild weather, he says.

Last year, the Jilin Provincial Construction Group also has built the Tiandingshan Ski Resort, which is located in the Lianhua Mountain, just a few hundred meters from the Ice and Snow World. The two projects have been completed at a total cost of 850 million yuan (US$121 million).

"Skiing during the day and light shows at the ice world in the evening will be a feast during winter," Chen says, adding that the company had invited experienced designers from Harbin and Europe.

Chen says the Tiandingshan Ski Resort is suitable for children and beginners.

"I see kids, still struggling to walk, learn skiing here. That is encouraging, and makes you feel that everybody is participating in winter sports," he says.

In the first month of its opening, the park, which can accommodate 30,000 people, recorded more than 20,000 visitors on a single day.

Tickets have been priced at about 300 yuan per person for those outside Jilin province and nearly 200 yuan for locals.

"Compared with Harbin Ice and Snow World, Changchun is not as cold, which means southern visitors can get used to northern weather easily," Chen says, adding the park and the ski resort are located by a mountain and lake, which provides a better view of nature.

According to a report of the China Tourism Academy released in early January, the country is anticipating a boom in ice and snow tourism ahead of the 2022 Winter Olympics.

China received 224 million tourists from both home and abroad last winter (late 2018 to early 2019), a 13.7 percent increase compared with the year before.

Harbin and Yichun in Heilongjiang province, and Changchun and Jilin city are all on the list for China's most popular winter tourism destinations.