​Riding out the storm — still a long way for traders 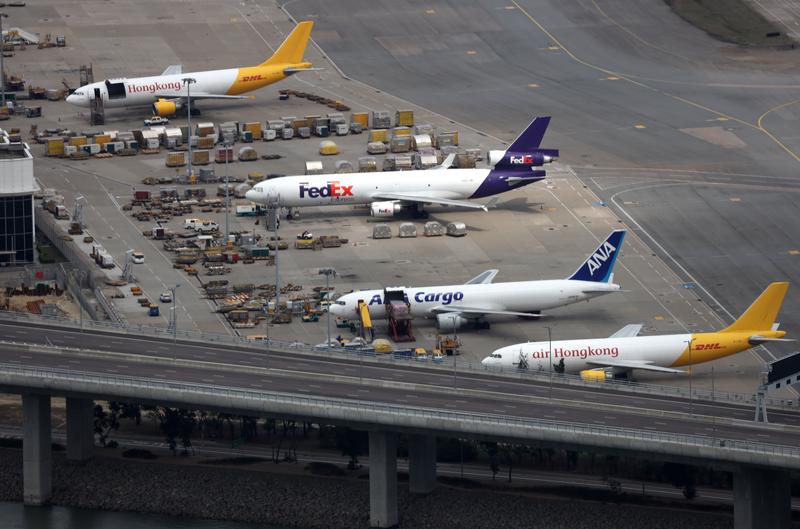 Cargo is loaded onto planes at Hong Kong International Airport before being delivered to destinations worldwide. (EDMOND TANG / CHINA DAILY)

Having endured the gloomy aspects of the nearly two-year trade spat between the world’s two biggest economies, it seems Hong Kong’s trade sector still has a long way to go to put itself back on track this year, with considerable uncertainties remaining on the horizon.

The protracted Sino-US trade row, which erupted in the first quarter of 2018, has piled unprecedented pressure on the city’s manufacturers, exporters and importers.

With the COVID-19 pandemic greatly hurting the supply chain and global demand, the decline in exports could be greater

The SAR recorded a HK$426.8 billion (US$54.95 billion) trade deficit last year, with imports and exports plunging by 6.5 percent and 4.1 percent respectively year-on-year — the steepest decline in a decade — according to the Census and Statistics Department.

In fact, Hong Kong’s strong export growth has lost its momentum and turned negative since November 2018, while its position as a global re-export hub has been wobbling.

Electronics exports, which account for about two-thirds of Hong Kong’s total exports, sank 5.7 percent in the first 10 months of last year compared with a year ago. While garment exports declined, most major industry sectors were down 10.5 percent in the face of growing competition from other production centers, particularly in Southeast Asia.

A 15 percent import tariff on Chinese-mainland-made items, including clothing and electronics products destined for the US market, took effect in September. It’s estimated that 87 percent of textiles and clothing, 52 percent of shoes from the mainland are subject to taxes.

According to a relationship manager at HSBC, three out of 10 garment company clients in his portfolio had credit problems last year, which is a relatively high proportion. Most of them are based in Hong Kong, but  they own factories and facilities on the mainland.

Lever Style — a Hong Kong garment maker that went public last year — is lucky enough to have dodged a bullet.

Chairman Stanley Szeto Chi-yan said the lingering trade frictions have had no negative impact on business.

The company used to manufacture its products on the mainland a decade ago but, because of rising costs, it sold all its factories in 2016 and transformed itself into an asset-light supply chain manager before the trade tensions began.

“If we still have factories there, I think it would have been much more problematic,” he said, adding he thought the company made the right decision.

At present, Lever Style has its biggest production base in Vietnam, with the flexibility to source from other countries like Cambodia and Indonesia if US tariffs are imposed.

Currently, the US is the company’s largest market, followed by the UK, Europe and the Chinese mainland.

The bright spot came when China and the US sealed a phase-one trade deal in January. China’s Finance Ministry said in early February it will slash tariffs on US$75 billion worth of US goods by half from February as part of the deal.

The US, for its part, has also agreed to cut tariffs on US$120 billion worth of Chinese goods by half — from 15 percent to 7.5 percent — within a month and scrap other tariffs that were imposed in September and December as the trade row escalated.

Between 10 and 20 percent of Hong Kong’s re-exports to the US from the Chinese mainland could benefit directly from the impending lower tariffs, said Nicholas Kwan Ka-ming, director of research at the Hong Kong Trade Development Council.

“Still, more than half of Hong Kong’s re-exports are still subject to 25 percent tariffs. But the latest agreement is better than nothing. At least there’ll be no more new tariffs,” he said.

Although future trade disputes may still be up in the air, Hong Kong traders could try to get more orders in the near term with less worries, Kwan said.

Though future trade relations are still uncertain, the novel coronavirus pandemic has replaced the trade dispute and become the biggest threat to Hong Kong exporters in the near term, according to an HKTDC survey.

The pandemic forced the suspension of operations in many factories on the mainland and even in Japan and South Korea. Some operations have yet to fully resume, putting a strain on the global supply chain.

“Even if we can recover from the supply side, the demand side is not able to contain the damage,” Kwan said.

He said he worries that the pandemic has resulted in the global economy’s losing its growth momentum, leading to a decline in demand for new orders.

The HKTDC has forecast that Hong Kong’s exports are likely to shrink by more than the previously predicted 2 percent this year. The council predicted in December that the city’s exports will decline 2 percent in value in 2020.

However, with the COVID-19 pandemic greatly hurting the supply chain and global demand, the decline in exports could be greater, Kwan said on Tuesday.

But Kwan said that for the time being, the council will not alter the forecast for the full year because it is still too early to tell what will happen. The council may not have a clearer picture of the year’s exports until two to three months later.