IATA chief calls on govts to save airlines from 'financial peril' 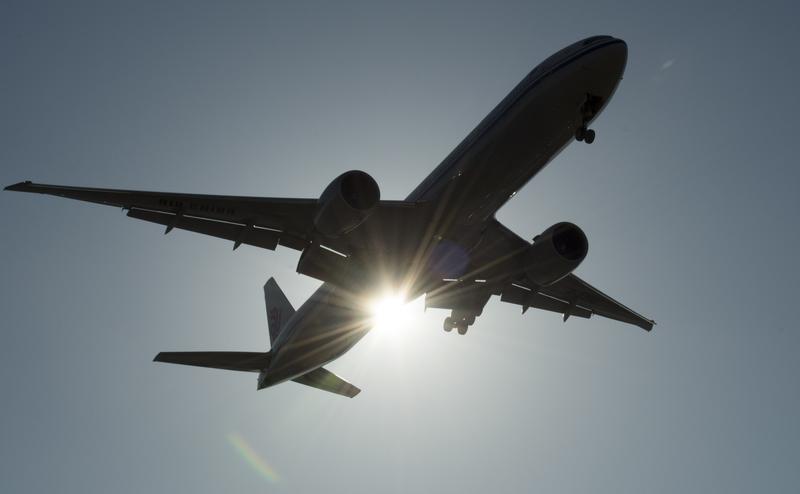 A Southern China Airlines flight from Guangzhou, China, flies past the sun as it arrives at Vancouver International Airport in Richmond, British Columbia, March 18, 2020. (JONATHAN HAYWARD / THE CANADIAN PRESS VIA AP)

GENEVA/SYDNEY/WASHINGTON/DUBAI/MANILA — The International Air Transport Association (IATA), the aviation industry's main global body, has called on governments worldwide to take "extraordinary measures" and "save the airline industry from financial peril" against the COVID-19 situation.

Governments cannot take a wait-and-see approach. We have seen how dramatically the situation has deteriorated globally in a very short time. They must act now and decisively

"Governments cannot take a wait-and-see approach. We have seen how dramatically the situation has deteriorated globally in a very short time. They must act now and decisively," IATA Director General Alexandre de Juniac said in a press briefing on Tuesday.

On March 5, IATA estimated that industry revenues could take a hit of up to US$113 billion in a worst-case scenario, without taking into consideration the massive restrictions on travel in the last few days, warned De Juniac.

“In normal times, airlines transport about 35 percent of global trade. And every job in air transport supports another 24 in the travel and tourism value chain -- nearly 70 million jobs," De Juniac said.

"Prioritizing air transport -- helping airlines financially survive through these dark times -- will position the world for the eventual recovery," he added.

Airline industry turmoil deepened on Thursday as Qantas Airways Ltd told most of its 30,000 employees to take leave and India prepared a rescue package of up to US$1.6 billion to aid carriers battered by coronavirus, government sources said.

The UN’s International Civil Aviation Organization called on governments to ensure cargo operations were not disrupted to maintain the availability of critical medicine and equipment such as ventilators, masks, and other health and hygiene items that will help reduce the spread of the coronavirus pandemic.

Passenger operations have collapsed at an unprecedented rate as the virus spreads around the world, with Delta Air Lines Inc parking more than 600 jets, cutting corporate pay by as much as 50 percent, and scaling back its flying by more than 70 percent until demand begins to recover.

Shares in US airlines fell sharply on Wednesday after Washington proposed a rescue package of US$50 billion in loans, but no grants as the industry had requested, to help address the financial impact from the deepening coronavirus crisis.

The Trump administration’s lending proposal would require airlines to maintain a certain amount of service and limit increases in executive compensation until the loans are repaid.

American Airlines Group Inc in a memo to staff rebuffed criticism that it had rewarded its shareholders with too many dividends and stock buybacks in better times, leaving it with less cash to manage the crisis.

“Unfortunately, this is no ordinary rainy day,” said Nate Gatten, American’s senior vice president global government affairs. “These are extraordinary circumstances, and additional support is necessary to protect jobs and ensure that the flying public can continue to rely on our industry after the crisis ends.”

In Australia, Qantas said it would cut all international flights after the Australian government warned against overseas travel and two-thirds of its 30,000 workers would need to take paid or unpaid leave.

“The sad fact is that due to circumstances beyond our control, travel demand has evaporated,” Qantas Chief Executive Alan Joyce said in a memo to staff seen by Reuters. “We have no work for most of our people.”

In China, international flight cancellations are rising this month, hitting 2,938 on average daily so far, Reuters calculations based on data from aviation data provider Variflight showed. That compared with 2,460 daily flights canceled in February and 387 in January.

Domestic capacity in China has been recovering since the second half of February, when workers started to return, but it is still down about 60 percent from a year earlier, according to Variflight.

India is poised to join a growing list of countries offering aid to its aviation industry. The Finance Ministry is considering a proposal worth up to US$1.6 billion that includes temporary suspension of most taxes levied on the sector, according to two government sources who have direct knowledge of the matter.

Taiwan’s Transport ministry said on Thursday it was inviting its airlines to submit capital requirements and financial plans with the view to giving them assistance, such as rolling over loans and providing operating funds.

The New Zealand government on Thursday advised citizens not to travel overseas because of the risks posed by the coronavirus and said it would shut its borders to those who were not citizens or residents.

Air New Zealand Ltd said it would close its cabin crew base in London earlier than initially planned, leading to the loss of 130 jobs.

Budget carrier easyJet PLC and its UK pilot union signed an agreement to minimize the risk of pilot layoffs in Britain over the next 18 months, including a pay freeze and asking all crew to take unpaid leave from March 23 to June 22, according to a memo seen by Reuters.

Emirates is asking pilots and cabin crew to take unpaid leave and rival Qatar Airways laid off about 200 staff in Doha this week as the coronavirus outbreak hammers demand for travel.

The state-owned airlines have slashed dozens of routes crucial to their Gulf hubs dependent on millions of passengers passing through each year.

Dubai’s Emirates, one of the world’s biggest international airlines, is offering pilots and cabin crew unpaid leave, according to internal staff emails seen by Reuters.

“You are strongly encouraged to make use of this opportunity to volunteer for additional paid and unpaid leave,” an email to pilots said.