The clever game of the coronavirus

When the novel coronavirus strikes, most people have no idea what’s really hitting them. Wang Yuke looks into the intricate chess game viruses play. 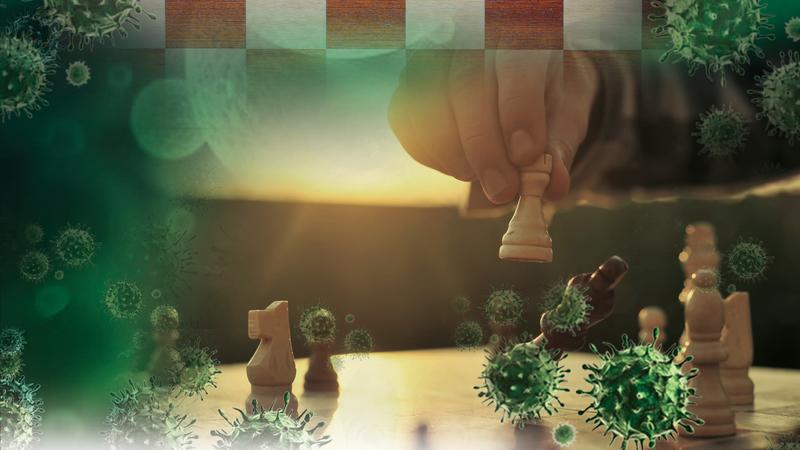 At 32, Weng Qiuqiu had a lot to look forward to. Married with a 5-year-old daughter and a baby on the way, her life seemed full. On Jan 9, she felt slowed by the onset of a cold. That marked the beginning of one of the many thousands of heart-rending tragedies that ended in her death 12 days later in Wuhan, Hubei province.

She had been unable to stand or even to speak by the time she was hospitalized. She had a high fever. A chest X-ray disclosed that her lungs had turned white — a critical clue pointing to the fact that she had come down with the novel coronavirus (known technically as SARS-CoV-2).

She wasn’t from a wealthy family, and the family couldn’t afford the cost of treatment at up to 60,000 yuan (US$8,597) per day in the first three days.

Her husband, Chen Yong, powerless and utterly afraid, set about every day to raise money but all that money was gone within 10 days. The treatment was of little help, anyway. Weng’s condition deteriorated fast. “Had I borrowed more, my wife could have been saved,” the grieving Chen told mainland media, his grief combined with feelings of guilt that he had let down the mother of his daughter and of his unborn child. He had no answer to give his daughter when she asked where her mother was. He believes he can never recover from those wounds.

We have food animals to eat but still resort to eating wild animals. That is just poor morality, bad tradition and ugly habits

Yuen Kwok-yung, chair of infectious disease at the Department of Microbiology at the University of Hong Kong

Weng was one of the over 3,000 recorded deaths from the virus SARS-CoV-2.

The world watches in shock at the virulence of the infection and how quickly it spread around the globe in the past weeks. Starting in Wuhan, the virus spread throughout Hubei. It continues to wreak havoc in at least 70 countries. Among the most seriously affected are Japan, South Korea, Iran and Italy.

The scourge was first identified in December, at a wet market in Wuhan. How did it start? Nobody is really certain. Conventional wisdom holds that it probably started in bats and passed to an intermediate host before jumping to humans. Bats are carriers of deadly viruses: rabies, SARS, Ebola among them. Rarely do bats get sick from these viruses. The natural immunity of bats is strong. That has led to some speculation that viruses become stronger and more deadly while attempting to adapt to bats’ immune system.

Humans have grappled with plagues reaping the lives of millions over millennia: the Plague of Justinian, the Black Death, the third Plague Pandemic in 1855.

Collectively the viruses and bacteria that cause plagues are called “pathogens”. Pathogens have played their role in human evolution. Simply stated, those of us who are here today are here because our ancestors survived the pathogens that ended the lineage of millions.

Viruses need a host to survive. They are not necessarily enemies of the human species, though their effects on human populations can be devastating.

Scientists describe a kind of tug-of-war going on between viruses and the hosts — a game of moves and countermoves. Genetic mutations of viruses are confronted by immune responses. If the virus finally “outplays” the host’s immune system, chances are the host will be infected.

It’s important to understand the mechanism of the virus’s entering a host’s cell and what happens next.

Viruses enter through “accommodating” receptors of host cells. Receptor cells in humans usually are in the form of proteins, able to identify malign intruders and stimulate the body’s immune reaction. SARS-CoV-2, for example, seeks out receptors in the nasal passages, oral cavity or respiratory tract of the host.

Once a virus has established a foothold in a human host, the virus reproduces itself, drawing on its host’s vital resources. The genetic material or “viral genome” is copied, creating viral proteins. There are more replications. The finished viral particles then can migrate from the host cell to infect other cells.

Current evidence suggests COVID-19 is not as deadly as SARS. It is the rapid spread of the disease that arouses so much fear.

The emerging virus is among the tiniest microbes on Earth. As we weather the storm and steel ourselves against panic, many may wonder how the virus, invisible to all but the most powerful microscopes, could bring the whole world to a terrified standstill.

Like all organisms, viruses “make mistakes” during their replication, better known as “mutations”. Chances are they could make mistakes in replication of the viral RNA and add a wrong nucleotide — a key building block of RNA. As the virus replicates, the errors cannot be corrected. As a result, millions of its “offspring” inherit the mistakes in their genomes, explains Jurgen A. Richt, professor of infectious diseases at Kansas State University. The resultant variations acquire capabilities to infect different species, including humans.

In addition to the great plagues, there have been numerous pandemics, spread from animals to humans over the past 50 years, including avian flu, swine flu, AIDS, Ebola and the current COVID-19.

The odds of a virus jumping from animal to human, or other species actually are quite small, says Dirk Pfeiffer, professor of the infectious diseases and public health at the City University of Hong Kong.

Whether a mutated virus can successfully transmit to a new species depends on whether the new species has accommodating receptors for the virus to enter, explains Pfeiffer. If the virus mutates, the genetic change may prevent it from effectively binding to a new host’s cell receptors. Then the host likely is spared infection.

The likelihood of a mutated virus infecting a new host also hinges on “how fit the virus is to survive the competition with other microbes in the host cell and how well it can adapt to the host cell’s environment,” says Pfeiffer.

There is also the question of the virulence of the organism — that is, the degree to which it is able to attack and damage its host, an important factor determining if it can complete the mission of infecting a new host.

“So, there are lots of factors, which means for all those factors to come together to produce a killer virus. Luckily this has a fairly low probability,” stresses Pfeiffer.

The genome of all organisms mutates, and viruses are not more likely to mutate than anything else, notes Matthew Evans, dean of science and professor of ecology at the University of Hong Kong. However, what tells them apart is “their (viruses’) generation time is very short so there are more opportunities for mutations to happen”.

“Imagine if the coronavirus happened 30 years ago; we might just put a new coronavirus down to a bad flu or cold,” says Evans. “But we have to acknowledge that human behaviors and practices have created chronic but tremendous damage to the ecosystem, sowing the seed of infectious diseases.

“We humans have been encroaching on land once occupied only by wild animals,” says Evans.

With the world population approaching 8 billion, demand is ever-increasing for animal meat. Human’s encroachment cuts deep into the wildlife habitat for pasturage. Food animals are thrust into closer contact with wildlife, creating a veritable laboratory, spreading new infections. Livestock are more vulnerable to diseases from virus carriers in the wild — bats, pangolins, rats and other carrion. Bats often shelter in farm buildings, Evans adds. “This was very evident during the early outbreaks of Nipah virus in Malaysia in 1998.”  Local fruit bats entered hog farms, and the Nipah virus infected the pigs.

At the wet markets where live animals are peddled or butchered on-site, viruses attached to their offal are exposed to the air, putting people at risk. This is what is suspected to have happened with the first case of COVID-19.

Some continue eating exotic animals, said Evans. Yuen Kwok-yung, chair of infectious disease at the Department of Microbiology at HKU, agrees, saying “We do not respect the existence of wild animals and their habitats. We have food animals to eat but still resort to eating wild animals. That is just poor morality, bad tradition and ugly habits.”

When people eat undercooked, virus-contaminated meat, they surely will be infected. Infection can occur even if meat is well-cooked because “there is cross-contamination in the kitchens during the slaughtering, and therefore eating utensils and the human hand transmit the virus,” cautions Yuen.

Eating exotic animals is much more dangerous in an industrialized city, particularly when the sanitary conditions are underregulated. “Epidemics do not happen in low-density populations — one infected person simply does not encounter enough native people for a disease to spread broadly,” says Evans. “You might wipe out a village but it probably won’t affect the next village. But in a city, all of us encounter thousands of other people every day — an epidemic can occur.”

Ostentation and vanity are at work driving people to eat exotic animals. There’s something they hope to gain from their strange consumption behavior, adds Richt.

Aging also plays a crucial part in the massive transmission and death. Aging is accompanied by degenerative disorders and other age-related ailments, including diabetes, high blood pressure, cardiovascular diseases, and cancer, which suppress the human immune system. Therefore, the elderly with underlying diseases are easy targets for infection. That explains why elderly people make up a large group of infected people and deaths among COVID-19 patients.

Interestingly, nature in some ways has already posted warning signs against feasting on bats and other exotic animals. The grotesque appearance of the flying mammal is disgusting and removes the desire to eat it from most sane folks. The cravings of some people, however, are insatiable.

The most sensible thing is for all people to stop eating exotic animals and shut down all businesses selling wild animals for food. It’s a consensus among experts. All wild animals carry profuse diseases not widely understood. Lack of enforcement of trade controls on the movement of exotic animals must be addressed, stresses David Dudgeon, chair professor in ecology and biodiversity at HKU. “In many cases, this might involve better enforcement of existing import regulations or agreements, such as the Convention in Trade in Endangered Species, rather than promulgation of new laws,” Dudgeon says.

The next novel infectious diseases will only be an uncertain certainty unless we, including the government agencies, do something to change the way we use wild animals and make up for the harm we have done to the ecosystem.