Iran has 1,000-plus infections in 1 day, Bhutan bans foreign tourists 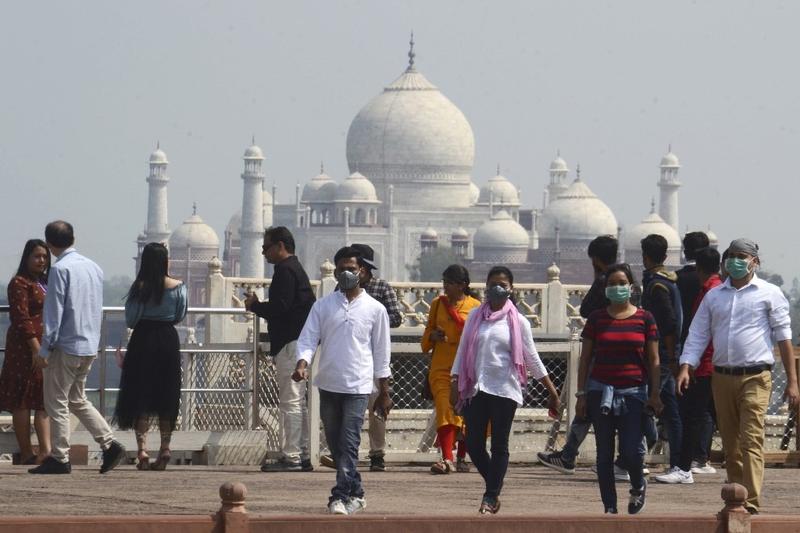 Tourists wear facemasks as a preventive measure against the spread of the COVID-19 coronavirus outbreak, near Taj Mahal in Agra on March 5, 2020. (PHOTO / AFP)

WELLINGTON / SYDNEY / SEOUL / BETHLEHEM - Iran’s death toll from coronavirus infections jumped on Friday to 124, as 17 died over the past 24 hours and more than 1,000 were additionally diagnosed with the disease, a health ministry spokesman said in Tehran.

Iran had reported 3,513 infections on Thursday.

Prime Minister of Bhutan Lotay Tshering announced on Friday morning that one positive case of COVID-19 has been confirmed in the country.

The patient is a 76-year old tourist from the United States who arrived in the country on Monday. He come to Bhutan through Guwahati, India.

According to the Health Ministry of Bhutan, the patient was touring India from Feb. 21 to March 1. He started his travel from Washington DC on Feb. 18.

The government will impose two weeks restriction on all incoming tourists with immediate effect, the health ministry said in a statement.

The coronavirus spreading around the world is “starting to look like a global pandemic,” said Singapore minister Lawrence Wong, who co-heads the country’s virus fighting taskforce.

“It is inevitable that at some point in time we will see fatalities from COVID-19 as we have seen all around the world,” health minister Gan Kim Yong said.

The spread of the infection has been accelerating in other parts of the world, including in Europe and North America, in recent days.

The World Health Organization (WHO) has not categorized the current situation as a pandemic but has said the United Nations agency would use the term if it became necessary.

Indonesia confirmed on Friday that two more people had tested positive for the coronavirus, taking the total of confirmed cases to four.

The two Indonesians were in their 30s and had been tested after being in contact with the first two confirmed cases, Health Ministry official Achmad Yurianto told a news briefing.

India’s total number of confirmed cases rose to 31, after a person from New Delhi with a history of travel from Thailand and Malaysia tested positive, its health ministry said.

Out of the 31 positive cases, the initial three cases that were found in Kerala had been successfully cured.

Saudi Arabia reopened two of the most holy religious sites in Islam, Al-Haram Mosque in Mecca and Al-Masjid al Nabawy in Medina, after they were closed for sterilization to halt the spread of the new coronavirus, state TV Al-Ekhbariya reported on Friday.

Saudi Arabia closed the sites to foreign pilgrims and traditional tourists from some 25 countries to stop the spread of the virus. It also said that citizens and residents of Gulf Cooperation Council countries wishing to enter must wait 14 days after returning from outside the region.

Saudi Arabia denounced Iran for granting Saudi citizens entry amid the coronavirus outbreak and urged it to reveal the identities of all Saudi nationals who had visited since the start of February, a government statement said on Thursday.

Saudi Arabia has reported five cases of the flu-like disease. Four of them were citizens who had recently visited Iran via Bahrain or Kuwait but did not disclose their travel details. The fifth is the wife of one of them.

A person in New Zealand confirmed to have been infected was revealed on Friday to have attended a rock concert packed with thousands of other people. The man and his partner had recently arrived back in the country from northern Italy.

Health authorities said the man in his 30s, who is the partner of a woman who was confirmed to have COVID-19 this week, attended the Tool concert at Spark Arena in Auckland on Feb. 28.

Director-General of Health Dr Ashley Bloomfield said the risk is low for all others who attended this concert. The man has been isolated at home since Wednesday.

New Zealand so far has four confirmed cases of SARS-CoV-2.

South Korea confirmed 113 additional infections on Friday afternoon, raising the total number of infections to 6,593, after 196 coronavirus cases were reported by the Korea Centers for Disease and Control and Prevention earlier in the day.

One more death was reported, lifting the death toll to 43. 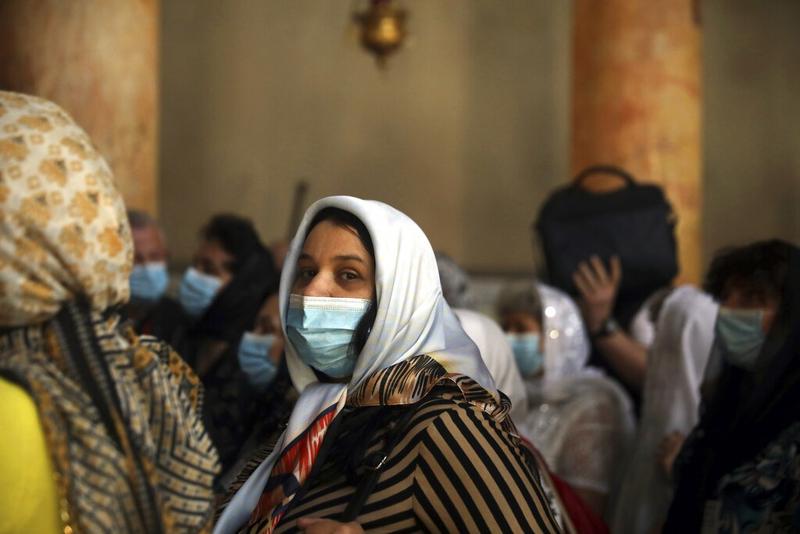 Fiji announced on Friday to widen its existing travel restrictions to cover all foreign nationals who have been present anywhere in South Korea within 14 days of their intended travel to the island nation.

All international air passengers are being screened with handheld temperature scanners prior to entering the island nation.

As of Friday, there are no confirmed cases of COVID-19 in Fiji which is closely monitoring the spread of COVID-19 and is prepared to pursue more stringent courses of action if necessary.

Palestinian President Mahmoud Abbas declared a 30-day state of emergency on Thursday and Bethlehem’s Church of the Nativity was closed following the discovery of seven cases of coronavirus in the traditional birthplace of Jesus.

The decree was announced by Palestinian Prime Minister Mohammed Shtayyeh, who decided to close all schools, colleges and kindergartens and to cancel foreign tourist reservations.

Australia ordered its first school closure on Friday after a 16-year-old pupil tested positive for the coronavirus, as the country’s prime minister warned the public bill for treating infected patients could top A$1 billion (US$661 million).

Australian authorities were gearing up for a much larger spread of COVID-19 on Friday and local health officials expressed that containment would be difficult.

Australia has recorded 60 cases of the coronavirus while two elderly people have died from the virus as authorities struggle to contain the outbreak. 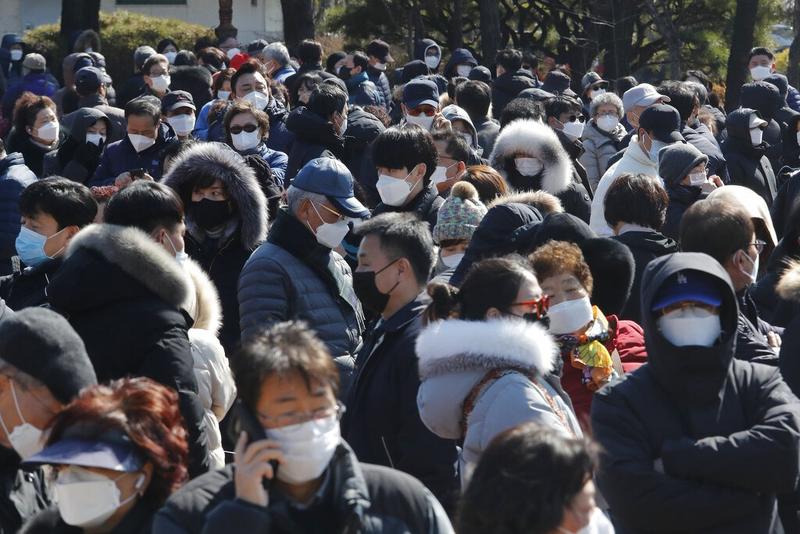 People line up to buy face masks to protect themselves from the new coronavirus outside Nonghyup Hanaro Mart in Seoul, South Korea, March 5, 2020. (AHN YOUNG-JOON / AP)

The Philippines government reported on Friday that two Filipinos tested positive of the novel coronavirus, bringing the total number of COVID-19 cases in the country to five.

A Tokyo hospital treating coronavirus patients issued guidance last week to its doctors and nurses: only one surgical mask per staff will be allocated each day due to a supply shortage.

The notice, posted on the walls of the hospital’s general ward on Feb. 28, said the facility only had enough masks in stock to last another month, so staff should use the same one throughout the day.

The crown prince of the oil-rich emirate of Abu Dhabi tweeted on Friday that he had discussed cooperation in fighting the new coronavirus with U.S. billionaire philanthropist Bill Gates.

Abu Dhabi is the capital of the United Arab Emirates federation, which has reported at least 27 coronavirus cases.

Qantas Airways said on Friday it would cut more international capacity this month as it grapples with falling demand due to an escalation in the coronavirus outbreak.

The latest cuts to destinations including Tokyo, Sapporo, Osaka and Auckland are on top of its grounding the equivalent of 18 planes as it cut international and domestic capacity last month.

The sixth newly confirmed COVID-19 case is a 69-year-old man who returned from Iran on Feb. 25, Special Assistant to the Prime Minister on Health Zafar Mirza said late Thursday.

The patient is in "clinically stable condition" in south Sindh province, and is being well taken care of, he said on Twitter.

His family members have been quarantined and are under the constant observation of health teams.