By Cao Desheng in Wuhan 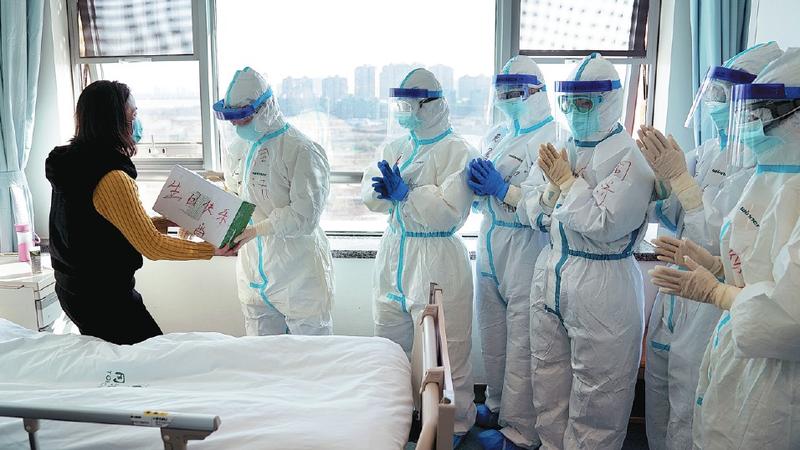 Medical workers present a birthday gift to a patient who has recovered from the novel coronavirus pneumonia at Tongji Hospital in Wuhan, Hubei province, on Feb 18, 2020. The patient was later discharged from the hospital. (WANG YUGUO / XINHUA )

China upholds the vision of a community with a shared future for mankind in its fight against the novel coronavirus pneumonia outbreak and strives to contribute to safeguarding global public health while protecting the safety and health of the Chinese people, President Xi Jinping said on Tuesday.

Xi made the remark in a telephone conversation with Sheikh Mohamed bin Zayed Al Nahyan, crown prince of Abu Dhabi in the United Arab Emirates.

Noting that the ongoing fight against the outbreak is the top priority of the Chinese government, Xi told Ethiopian PM Abiy Ahmed in a phone conversation that China has taken the most comprehensive, thorough and rigorous measures to prevent and control the disease, which have produced positive results

China will continue to take concrete measures to protect the health and lives of foreigners in the nation, including those from the UAE, and is willing to closely communicate with the UAE about the development of the contagion and share epidemic control experiences with it, he added.

On bilateral ties, Xi said China stands ready to join hands with the UAE to enhance political mutual trust, and strengthen bilateral pragmatic cooperation in fields such as energy, infrastructure construction, financing, investment and industrial production capacity under the framework of the Belt and Road Initiative.

The crown prince highly appreciated the strong measures China has taken to control the disease, and said his country stands firmly with China to overcome the challenges.

Speaking with Ethiopian Prime Minister Abiy Ahmed Ali by phone on Tuesday, Xi mentioned China’s assistance to Africa in 2014 in fighting the Ebola virus and African countries’ support for China in fighting the novel coronavirus.

He said these events demonstrate the brotherhood between China and Africa, which help each other when they face difficulties.

China stands ready to strengthen cooperation with African countries in such fields as providing medical supplies — including test kits — advancing the building of an African disease control center and partnership in public health and disease control, Xi said.

READ MORE: WHO: Virus no longer a pandemic, still an emergency

He added that China will go all out to protect foreign students studying in the country, including those from Ethiopia.

Noting that the ongoing fight against the outbreak is the top priority of the Chinese government, Xi said China has taken the most comprehensive, thorough and rigorous measures to prevent and control the disease, which have produced positive results.

He said the outbreak will not undermine the foundation of the country’s long-term stability and development and that China has the confidence and capability to win the battle against the virus, to reduce the impact of the epidemic on the Chinese economy to a minimum and to achieve the socioeconomic goals as planned.

Abiy said China has made great contributions to preventing the contagion from spreading globally. He said the international community has witnessed Xi’s strong leadership in leading China to respond to the outbreak as well as China’s strong ability to mobilize and act.

Ethiopia has faith China will win the battle against the epidemic at an early date, he added.