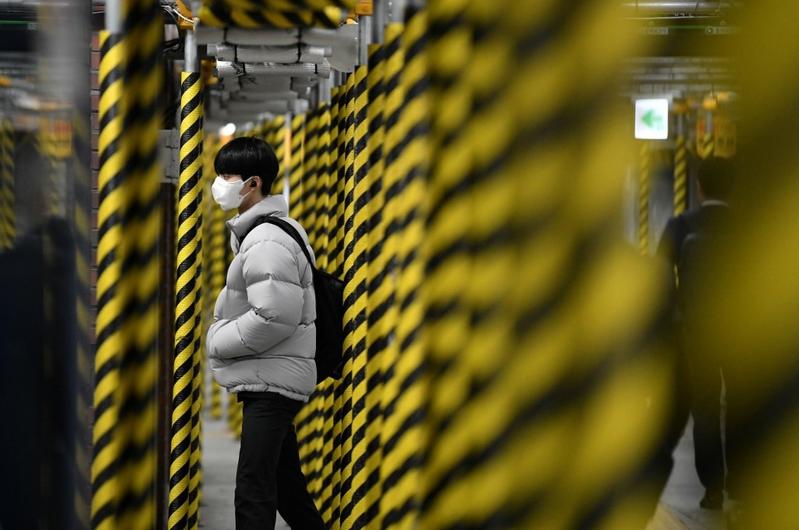 A man wearing a face mask walks between columns at a subway station being renovated in Seoul on February 22, 2020. (JUNG YEON-JE / AFP)

The latest figures in South Korea followed another 169 confirmed cases announced by the Centers for Disease Control and Prevention earlier in the day, which included one US solider. The numbers are expected to rise as the government widens its testing.

The new cases pushed the total tally to 1,146, with the numbers expected to rise as the government widens its testing

The 23-year-old soldier is based in Camp Carroll, about 20 km from Daegu, the epicenter of the virus outbreak in South Korea. The camp is also near a disability centre that has had its own outbreak of the virus.

A twelfth death from the virus was reported on Wednesday, according to the Joongang Ilbo newspaper.

Around 80 percent of the country’s cases - including at the disability centre - are linked to a Daegu church, and to a hospital in nearby Cheongdo County, which some members are believed to have visited.

The church said it had agreed to provide the government with contact details for all of its members and people in trainee programmes, on the understanding that the information would not be made public.

“We have obtained a list of 212,000 number of the Shincheonji believers from the church last night,” vice health minister Kim Gang-lip said at a briefing on Wednesday.

The Vietnamese government said in a news release that people from thos areas who needed to come to Vietnam for other reasons must be quarantined for 14 days when entering the country.

Japan is planning to ban entry by foreign nationals who have visited certain regions in South Korea due to outbreaks of the virus, government sources said Wednesday.

Foreign nationals who have visited Daegu and neighboring county Cheongdo within 14 days will be subject to the entry ban, the sources said.

The northern island of Hokkaido, the most affected area in Japan with 38 cases, reported another death while a Tokyo man in his 80s also died, bringing the country’s total fatalities to seven including four from the cruise liner.

Japan had 175 domestic cases of infection from the virus as of Wednesday evening, separate from 705 from a cruise liner quarantined near Tokyo early this month and 14 from returnees on charter flights from Wuhan, China, public broadcaster NHK said.

“We know that this virus will only spread even more and yet we can’t even get tested,” said one mother in Hokkaido’s Sapporo city, adding she hoped testing capacity would be expanded.

Thailand said it will step up efforts to contain the novel coronavirus after confirming three more cases, taking the country’s total to 40.

Health Minister Anutin Charnvirakul said in a briefing that the viurs has been classified as a dangerous communicable disease. Under the change, anybody with suspect symptoms after visiting a high-risk country must report to the authorities within three hours. Visitors who lie about symptoms or travel history could be deported.

There’s no widespread community transmission of the disease in Thailand yet, Permanent Health Secretary Sukhum Karnchanapimai said at the briefing.

Nineteen people have died and 139 people have been infected by coronavirus in Iran, health ministry spokesman Kianush Jahanpur said on Wednesday in an announcement on state TV.

Several of Iran’s neighbors have closed their borders and banned flights from Iran due to fears over the virus.

A World Health Organization (WHO) team will travel to Iran this weekend to provide support regarding the novel coronavirus, WHO chief Tedros Adhanom Ghebreyesus said on Wednesday, noting that on Tuesday.

Kuwait, Iraq, Bahrain, Oman, Lebanon, the United Arab Emirates and Afghanistan have all reported cases of coronavirus involving people who traveled to Iran.

Iran’s deputy health minister and a member of parliament were among those infected.

Kuwait’s health ministry said on Twitter on Wednesday that the number of people diagnosed with coronavirus in the country had risen to 25 after 13 more cases were confirmed.

The ministry also said in a statement that the new cases were related to people traveling to Iran.

Bahrain said its infections had risen to 26 after three new cases were confirmed on a flight from Iran.

Ready for the 'worst case'

The United Arab Emirates is ready for “worst case scenarios” as the coronavirus spreads in the Middle East and has the facilities to quarantine patients and screen new arrivals, a government official said on Wednesday.

It was too early to ban public gatherings in the business, trade and tourism hub, the official from the UAE National Emergency Crisis and Disasters Management Authority added. Dubai is due to host the Expo 2020 world fair in October for six months.

The UAE has reported 13 cases of the new coronavirus since Jan 28, three of whom have recovered.