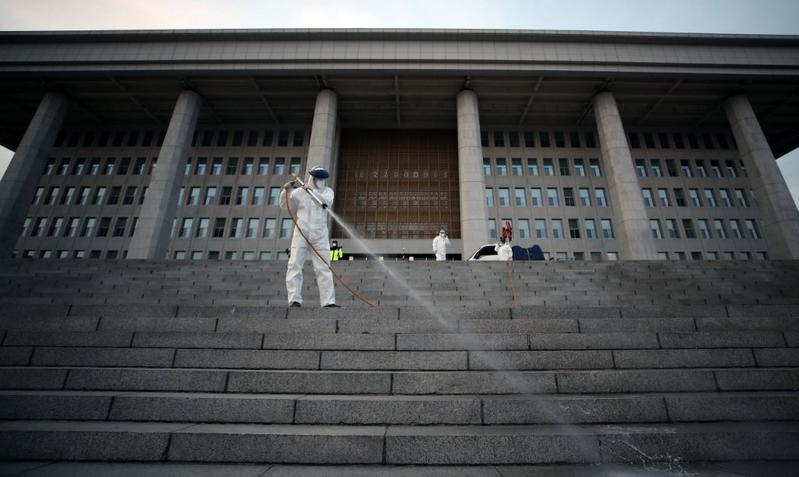 Workers spray disinfectant as part of preventive measures against the spread of the novel coronavirus pneumonia, at the National Assembly in Seoul on Feb 24, 2020. (YONHAP / AFP)

SEOUL — South Korea's President Moon Jae-in said on Tuesday the coronavirus outbreak situation in the country was “very grave,” as a top Iranian health official tested positive for the virus in another sign the disease may be spiraling out of control in the country.

South Korea’s tally of cases of coronavirus cases rose to 977, fuelling fears the outbreak, which is thought to have begun in the central Chinese city of Wuhan in December, is developing into a pandemic.

A member of a Korean Air cabin crew tested positive for the virus, the airline said, prompting it to shut its office near Seoul’s Incheon International Airport, where the crew briefing room is located

A member of a Korean Air cabin crew tested positive for the virus, the airline said, prompting it to shut its office near Seoul’s Incheon International Airport, where the crew briefing room is located.

About 68% of South Korea’s cases have been linked to the Shincheonji Church of Jesus, where the first case was reported in a 61-year-old woman, but it is not known how she became infected.

South Korea reported its eleventh death from the virus as a 36-year-old Mongolian national died on Tuesday, becoming the first foreigner there to have died from the virus. The Korea Centers for Disease Control and Prevention (KCDC) reported 144 new confirmed cases.

Many of the new cases were in the southeastern city of Daegu, where the church is located, and from nearby North Gyeongsang province, the KCDC said.

Moon, in his first visit to Daegu since the outbreak began, called the situation very grave and said the coming week would be key in the battle to contain the virus.

He reassured residents that the government was not considering locking down the city.

Health authorities aimed to test more than 200,000 members of a church at the center of a surge of new coronavirus cases. Authorities said they had tested 13,000 people on Monday and expected to test another 12,500 on Tuesday, up from about 7,500 a day previously.

Each polymerase chain reaction (PCR) machine that South Korea is using to test for the virus is running four tests a day, up from three in recent days, the KCDC said. Each test takes two to three hours.

ALSO READ: US, S. Korea eye scaling back joint training due to coronavirus

The leader of the Shincheonji Church said it had agreed to give authorities the names of all members in South Korea, estimated by media at about 215,000 people.

The government would test all members as soon as possible to “to contain the spread of the virus and relieve public anxiety”, the prime minister’s office said in a release.

The church, which has faced criticism of its handling of the outbreak, asked the government to ensure the personal details of its members did not become public.

The government’s goal is to stabilize the situation in Daegu within four weeks, Vice Health Minister Kim Kang-lip said.

North Gyeongsang province has also seen surges in cases, most from a hospital in Cheongdo, and it was designated a “special care zone” along with Daegu last week.

On Tuesday, 21 of the 33 cases from the province were confirmed to have come from a home for the disabled people in Chilgok county, also near Daegu, traced to a worker there whose mother is a member of the Shincheonji Church in Daegu, Governor Lee Cheol-woo said.

The US Centers for Disease Control and Prevention, meanwhile, raised its warning level for South Korea and recommended Americans avoid all non-essential travel to the country, citing the “widespread, ongoing outbreak” of the coronavirus.

The US and South Korean militaries said they were considering scaling back joint training, in one of the first concrete signs of the virus’ fallout on global US military activities.

More than 400 South Korean citizens were set to return from Israel, which imposed an entry ban and arranged two charter flights after more than two dozen South Korean Catholics who had gone on a pilgrimage there tested positive for the virus.

Singapore said on Tuesday it would ban all visitors who had recently traveled to the South Korean city of Daegu and Cheongdo County, and may impose stricter travel restrictions for South Korea if the coronavirus spreads more broadly there.

A woman wears a protective mask while walking along the side of a street in the Iranian capital Tehran on Feb 24, 2020. (ATTA KENARE / AFP)

In Iran, two more people infected with coronavirus have died, Iran's health ministry said on Tuesday, taking to 16 the toll in the Islamic Republic, which has the highest tally of deaths outside China.

Iraj Harirchi, a deputy health minister who has been the face of the government’s campaign against the virus, said he tested positive for it late Monday, the day he gave a press briefing on efforts to combat the outbreak.

“It will be safer for people to stay at home. There were 34 new confirmed cases in the past 24 hours, including 16 people in Qom city,” Health ministry spokesman Kianoush Jahanpour told state TV.

He said 95 people had been infected across Iran.

To prevent the spread of the virus, Iranian authorities have ordered the nationwide cancellation of concerts, soccer matches, closures of schools and universities in many provinces as a precaution.

Iraq has detected four new cases of coronavirus in Kirkuk province, the health ministry said on Tuesday, bringing the total cases in the country to five and marking the first instance of Iraq patients.

The outbreak threatens to isolate Iran further. The United Arab Emirates, which has 13 virus cases, suspended all flights with Iran for at least a week, state media said

The patients are an Iraqi family who had been on a trip to Iran, the ministry said in a statement. They have been placed in quarantine.

Afghanistan, Bahrain, Kuwait and Oman also reported their first new coronavirus cases, all in people who had been to Iran.

The outbreak threatens to isolate Iran further. The United Arab Emirates, which has 13 virus cases, suspended all flights with Iran for at least a week, state media said.

Meanwhile, a Turkish Airlines flight from Iran to Istanbul was diverted to Ankara on Tuesday at the request of Turkey’s Health Ministry, an aviation source said, and TV broadcasters said passengers were suspected of coronavirus infection.

Seventeen passengers, including 12 from Iran’s Qom region, were suspected to have the virus, broadcaster CNN Turk reported, adding the passengers would be quarantined in Ankara.

In Thailand, the authorities confirmed two new cases of the coronavirus,  bringing the total infections in the country to 37.

Both of the new cases are Thai nationals, Sukhum Kanchanapimai, the health ministry’s permanent secretary told a news conference on Tuesday.

One patient is a female, 31, and has a family member with a history of traveling from China, Sukhum said adding that officials are investigating the rest of the family.

“The second, is a 29, male driver for Chinese tourists,” he added.

A total of 22 patients have been discharged and 15 are still being treated.