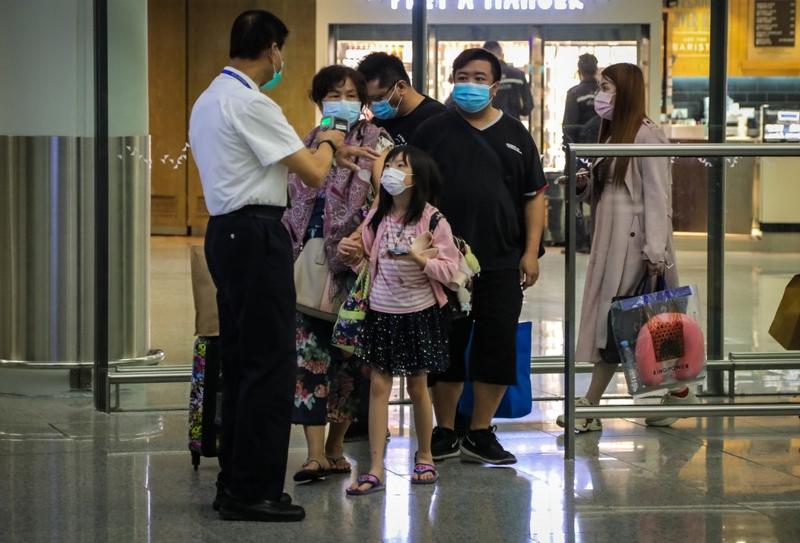 A passenger has her temperature measured by airport health staff with an infrared thermometer after arriving inside Hong Kong International Airport on Feb 21, 2020. (VIVEK PRAKASH / AFP)

HK's labor union made the suggestion to bring home people after receiving 607 requests for help from among the more than 2,000 people stranded in Hubei province

The union said that the high-speed train stops at different locations inside the province making it much easier for Hong Kong residents, who are dispersed in different cities throughout the province, to get on than having to make the trek to the designated airport to board a charter flight.

The union made the suggestion after receiving 607 requests for help from among the more than 2,000 people stranded in Hubei province. Of the requests, 40 people stated that they have urgent needs to return to Hong Kong.

Those included 21 elderly people with chronic diseases, the parents of three infants under six months old and five pregnant women, one of whom is seven months pregnant, said FTU’s spokesperson.

The elderly patients said they have problems seeking medical care and could not buy medications without medical insurance due to the mainland's health care system, said the union’s spokesman. Pregnant women and babies were facing acute shortages of essential supplies such as folic acid, calcium tablets, and infant formula.

Another 184 people among the stranded group said they needed to return to Hong Kong to work. They have no income in Hubei and are worried that they could lose their jobs in Hong Kong if they continue to be absent.

The spokesman for FTU said the Hong Kong government should try to overcome all obstacles, including the high cost, to evacuate its people. It should treat the evacuation as an emergency and work out a plan to carry it out, the union said.

Of the 607 Hong Kong people seeking help, the largest group of 94 are in Xianning, 72 are in Yichang, 70 in Jingzhou and 54 in Wuhan, the capital of Hubei province.