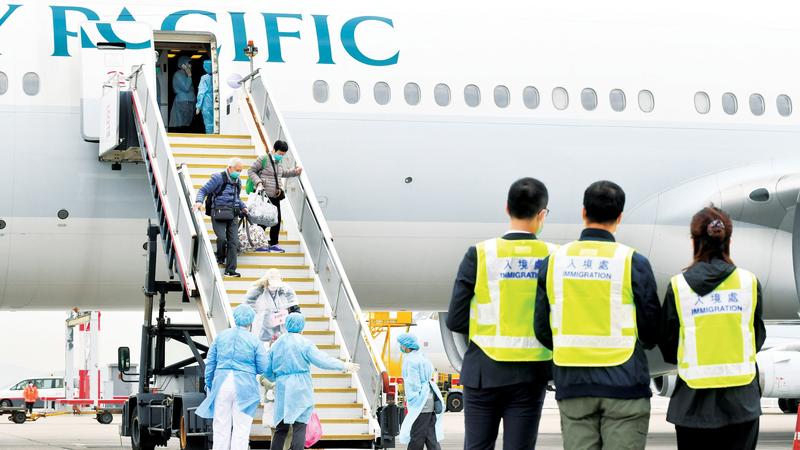 The first batch of 106 Hong Kong residents on board the Diamond Princess cruise ship return to Hong Kong from Tokyo on Feb 20, 2020 on a flight chartered by the Hong Kong Special Administrative Region government. (PHOTO / INFORMATION SERVICES DEPARTMENT)

The flight landed at the Hong Kong International Airport at around 1:40 am local time. Those passengers will undergo the same 14-day quarantine as the first batch of 106 Hong Kong residents who returned on Thursday.

There were also two Macao residents arriving in Hong Kong by the flight, who were taken to Macao by the vehicle arranged by the Macao Special Administrative Region government

There were also two Macao residents arriving in Hong Kong by the flight, who were taken to Macao by the vehicle arranged by the Macao Special Administrative Region government.

Director of Immigration of the HKSAR government Erick Tsang Kwok-wai said on Saturday in Japan that there were another 18 people who did not catch the chartered flight and would take other flights back to Hong Kong later Saturday.

Diamond Princess, initially carrying around 3,700 passengers and crew from more than 50 countries and regions, had been quarantined at the Yokohama Port south of Tokyo since Feb 5.

Before the evacuation operation by the HKSAR government, there were altogether 364 Hong Kong residents on board the quarantined ship, including 66 tested positive for the new virus and 41 close contacts, according to John Lee Ka-chiu, secretary for security of the HKSAR government.

The HKSAR government said in a statement shortly after the arrival of the flight on Saturday that those diagnosed with the disease will stay in Japan for medical treatment, and there will be HKSAR government staff to offer assistance to those still in Japan.

In addition, Secretary for Food and Health Sophia Chan Siu-chee said on Friday that the HKSAR government would bring back those close contacts as soon as possible, provided they test negative for the virus and their conditions are fit to take the plane.