By Pan Mengqi and Xu Lin 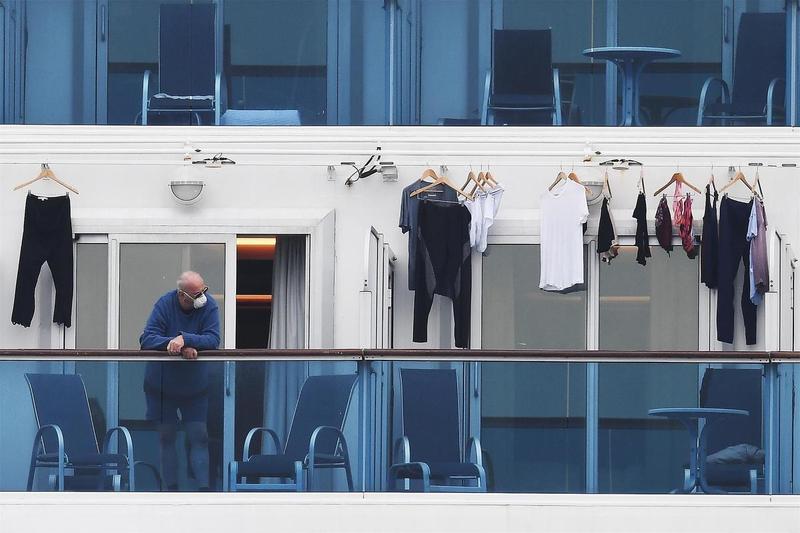 A passenger is seen on a balcony of the Diamond Princess at the Daikoku Pier Cruise Terminal in Yokohama on Friday. (CHARLY TRIBALLEAU / AFP)

On Jan 26, Chen Risheng, a magician from Taiwan, flew to the Vietnamese port city of Da Nang before boarding the Diamond Princess cruise liner the next day.

The day before Chen arrived in Vietnam, the vessel had made a port call in Hong Kong, where an 80-year-old man who disembarked was later diagnosed as the city's 14th novel coronavirus pneumonia patient.

A total of 3,711 passengers－including Chen－and crew members on board could have had contact with the patient.

Matthew Smith, a US citizen who has been quarantined on the Diamond Princess with his wife

The cruise Chen joined started in Yokohama, Japan, on Jan 20, and the vessel visited the Japanese city of Kagoshima, Hong Kong, Da Nang and Cai Lan in Vietnam, Keelung in Taiwan and Naha, capital of the Japanese prefecture of Okinawa. The liner returned to Yokohama on Feb 3.

After hearing on Feb 1 that the 80-year-old had become infected with the virus, Chen said he began to feel anxious.

"A day earlier, the ship had docked in Keelung. At the time, we hadn't heard that there had been a case of infection. Many passengers disembarked and went sightseeing. Some people who knew that I came from Taiwan asked me to act as their guide. We had a great time.

"After hearing that there had been a case of infection, the atmosphere onboard became tense. I posted a warning on my Facebook account. I also tried to adjust my mindset and told myself to stay optimistic, eat more fruit and drink more water to stay healthy.

"The captain broadcast daily messages of encouragement to everyone on the ship."

On Feb 3, the vessel returned to waters off Yokohama. The Japanese government issued orders for everyone to remain onboard and for the vessel to be isolated and quarantined for at least two weeks.

Chen said, "I packed all my things on Feb 3 in preparation to leave the ship and return home the next day, but I was told at the last minute that no one could disembark and we all needed to be quarantined until Feb 19."

He said the leg of the cruise he joined was scheduled for Jan 27 to Feb 4, so he only packed essentials for the trip.

"During the quarantine period, I have run out of vitamin C tablets, snacks and contact lenses. Fortunately, I asked a friend to bring me some supplies from Tokyo. He drove to Yokohama and asked workers at the port to help deliver them to my cabin," Chen said. 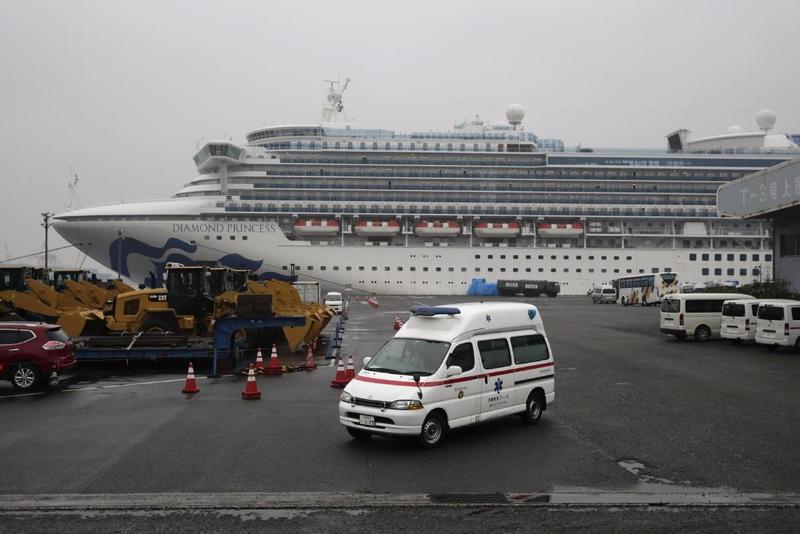 An ambulance leaves the dockside in Yokohama on Sunday. (JAE C. HONG / AP)

He added that crew members deliver meals and water to passengers every day.

"They also provide supplies of alcohol disinfectant, face masks and thermometers. Passengers take their temperature each day and report if they have a fever. My temperature is 36.8 C, which is normal. But I have still been anxious, especially when checking my phone every morning and seeing dozens of new cases on the ship."

According to Japanese broadcaster NHK, as of Tuesday, the number of infections on the ship had risen to 542 and laboratory kits had been used to test 2,404 people for novel coronavirus pneumonia.

Japan has the largest confirmed cluster of cases outside China. As of Monday, all confirmed cases and a small number of elderly passengers had been transferred to hospitals.

Zeng Guang, chief epidemiologist at the Chinese Center for Disease Control and Prevention, said the rapidly rising number of infections on the Diamond Princess has raised questions about whether the isolation and quarantine orders imposed on the vessel have been effective.

"The case of the Diamond Princess is highly instructive for us to gain more understanding of the novel coronavirus, but for now, it seems that keeping suspected contacts in the same space requires more stringent management measures.

But in practice, this is not easy.

The Diamond Princess is a United Kingdom vessel owned and operated by Princess Cruises, a subsidiary of the United States company Carnival Corporation. It is mainly used for voyages in Asia during summer in the northern hemisphere.

Huang Huang, a research fellow at the China Tourism Academy, said it is an unwritten rule that cruises operate under a flag of convenience, meaning that a vessel is registered in a country other than its home nation for purposes of lower taxation and more-lenient regulations. Most are registered in Panama or Bermuda.

"The case of the Diamond Princess highlights the pitfalls inherent in the cruise industry," Huang said. "All seems OK until an unexpected event like this occurs ... which is harming the interests of tourists. The problem should be dealt with properly, for the industry's sustainable development." 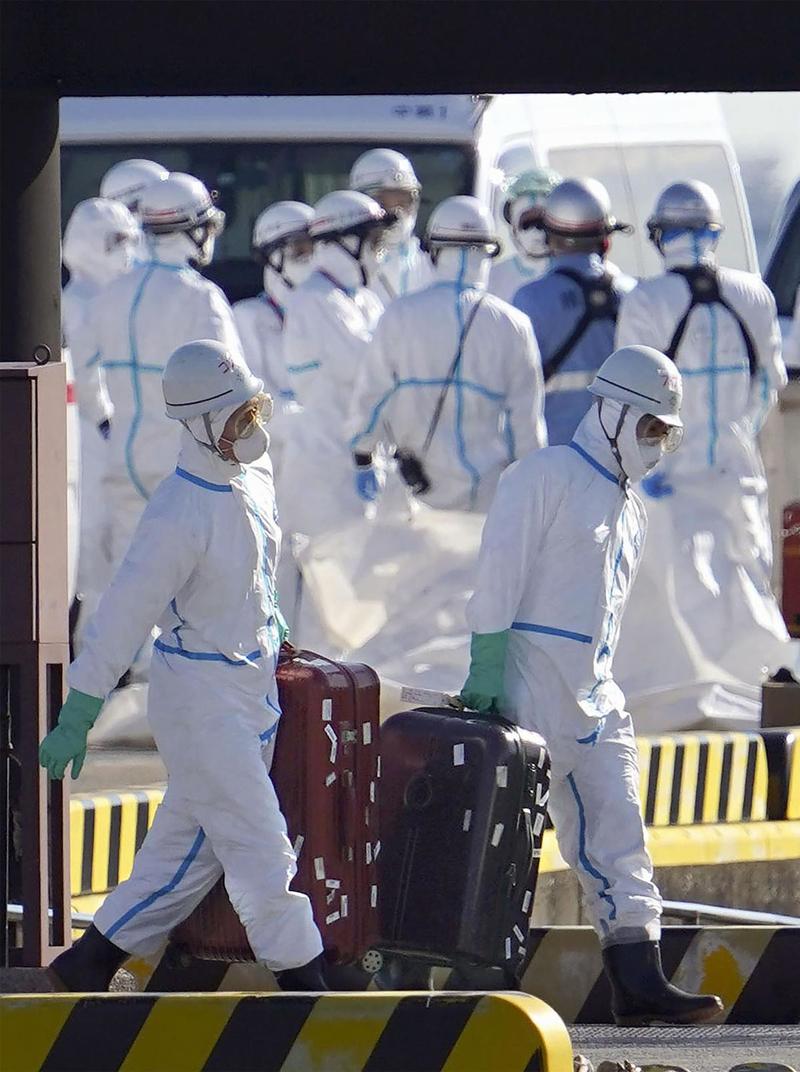 Some Japanese media reports said the decision to keep the ship at sea was prompted by concerns over the safety of the public and the forthcoming Tokyo Olympics, which are scheduled to start on July 24.

"In an ideal situation, passengers and crew should have left the ship and been quarantined as soon as possible," Huang said, adding that Japan had been reluctant to take such a high risk.

On Jan 30, the World Health Organization declared the outbreak a public health emergency of international concern.

Cai Qinghong, a partner at Beijing Merits & Tree Law Offices, said, "Under such circumstances, Japan has the right to refuse entry of the Diamond Princess according to the International Health Regulations."

She said that when a vessel is in international waters, the responsibility for operating it rests with the country where it is registered, which in the Diamond Princess' case is the UK.

"Japan can legally keep those onboard in quarantine if this is a necessary step to curb the spread of the virus. But a further assessment is required of whether this is a proper course of action, based on Japanese laws and the situation in port."

Passengers on the vessel have an obligation to abide by the measures taken by the Japanese government and the cruise company, and should not leave the ship without permission, Cai said.

In statement issued on Tuesday, Sylvie Briand, director of pandemic and epidemic diseases at the WHO, said the organization is working very closely with the Japanese authorities regarding the Diamond Princess.

According to Japanese media reports, it is estimated that people from more than 50 countries and regions are on the Diamond Princess. A number of countries, including the United States, Canada, Italy and South Korea, have evacuated their citizens from the ship.

However, Matthew Smith, a US citizen who has been quarantined on the vessel with his wife, said he prefers to remain on the liner.

"Our greatest desire at this point is to maintain the quarantine that the Japanese health officials have imposed and then be tested for the virus at the end of this period so we can establish with relative certainty that we are not infected and are free to go," Smith said. 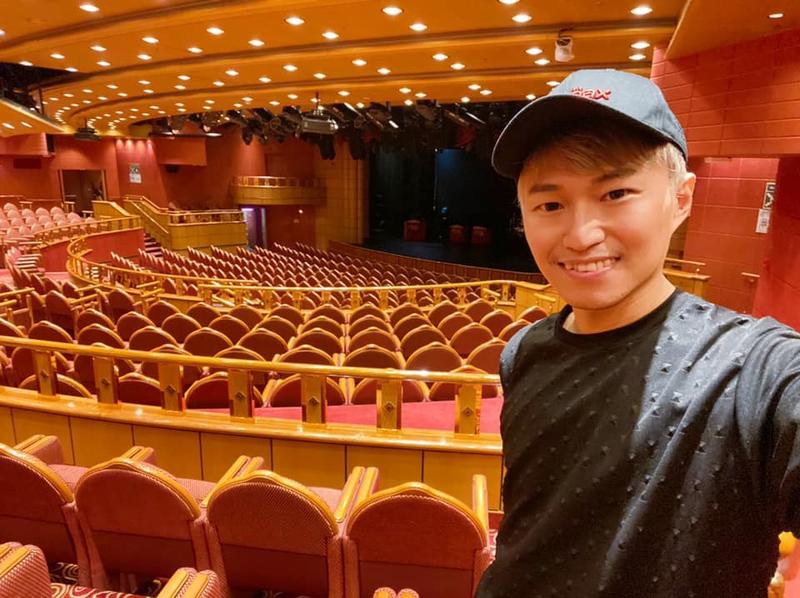 Two charter flights were arranged by the US on Monday to evacuate its citizens from the ship.

Some 400 US citizens and their families on the vessel will also be offered seats on two flights to Travis Air Force Base near Sacramento, California. US medics will screen the passengers, and those exhibiting symptoms will not be allowed on the flights.

Smith said he was skeptical about the plan, adding, "I understand the need to leave the ship and be elsewhere, but under these circumstances, the offer involves putting people on buses with those who have not completed their quarantine and have not been tested for the virus."

He said he would rather stay on the ship. "We have access to a balcony, we are fed well－three times a day－they provide all the necessities we need here," he said.

However, Smith said he sympathizes with those who are not staying in a suite, as he and his wife are. "We can go outside for fresh air and sunshine whenever we like," he added.

"Other passengers have a vastly different experience if they're staying in cabins that have no window, which are markedly smaller than ours and have no access to fresh air. These passengers have been allowed on deck for an hour every few days."

Zeng, from the Chinese Center for Disease Control and Prevention, said that although evacuations may increase the risk of cross-contamination in transit, it is still better to protect and keep suspected cases in a relatively safe area, rather than on the ship. He added that experts are not clear on how the virus spread on the Diamond Princess.

Liu Bende, vice-president of Jiangxia First People's Hospital in Wuhan, Hubei province, the epicenter of the outbreak, said, "On cruise ships, buffet food is usually served, so it is likely that the virus can be transmitted through such food, which is commonly eaten by all passengers."

Liu, who heads a team of experts organized by the Jiangxia district government to fight the outbreak in Wuhan, added, "The virus can also be spread through passengers touching food with contaminated hands.

"Airborne transmission is a major means by which the novel coronavirus can spread, so those who are infected can transmit it through sneezing or coughing. It is also easier for the virus to be transmitted in indoor areas, including ships' cabins. In addition, it is spread through direct physical contact and fecaloral transmission."

Liu suggested that all ventilation systems on the Diamond Princess should be switched off to reduce transmission of the virus, adding that this measure should also be adopted in hotels and hospitals.

"Natural ventilation by opening windows is the best choice," he said.

Liu also said it was not a good decision to allow the passengers to stay on the Diamond Princess for quarantine. 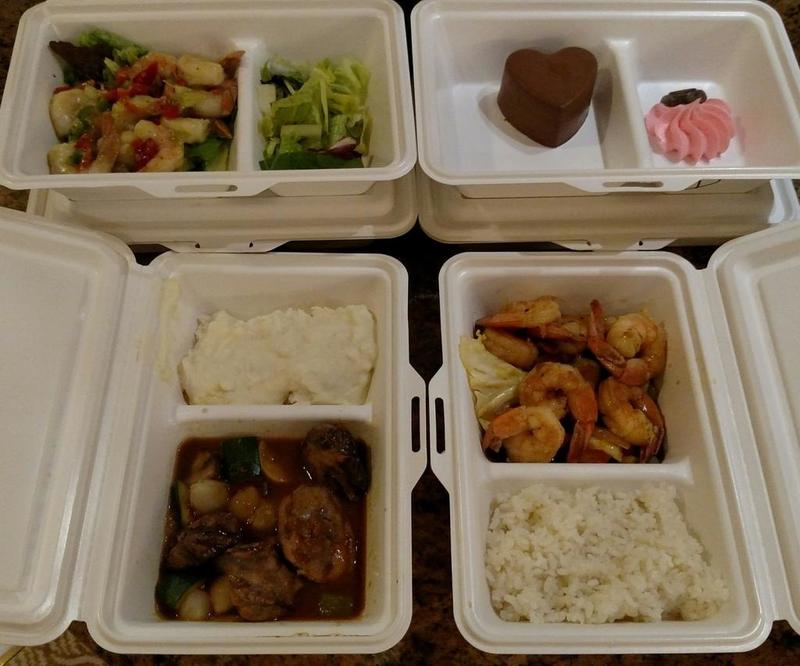 A Valentine's Day dinner for two on the ship. (PHOTO PROVIDED TO CHINA DAILY)

"The biggest weakness on cruise ships in cases of infectious disease is that most cabins are small and almost sealed, with no windows, which can cause a virus to spread quickly," he said.

"In addition, each passenger must be quarantined in a single room, as those who are infected but have no symptoms may also transmit the virus, which will lead to a rise in the number of infections."

Ye Xinliang, a professor at the School of Management at Shanghai University of Engineering Science, suggested that cruise companies should establish a declaration system to determine tourists' recent travel history and health condition. This information should be shared promptly with customs and health authorities.

"Cruise companies can also use equipment such as thermal monitors to automatically measure visitors' temperature before they enter public areas from their cabins," Ye said.

He added that the case of the Diamond Princess will have a psychological impact on Chinese tourists, as some will now believe that such cruises are unsafe. "It takes time to restore market confidence and foster new customers," he said.

Ye added that by the end of next month, a total of 50 million yuan (US$7.14 million) will have been lost at Shanghai's two ports from anchorage fees for cruise vessels, takings from tax-free shops and at companies supplying such vessels.

It is also estimated that 1 billion yuan will have been lost by those providing support services for the cruise industry in Shanghai, including travel agencies, hotels and restaurants catering to tourists.

"Despite all these issues, cruise operators are confident about the prospects for China, the second-largest cruise market in the world," he added.

Wang Xiaodong in Wuhan contributed to this story.