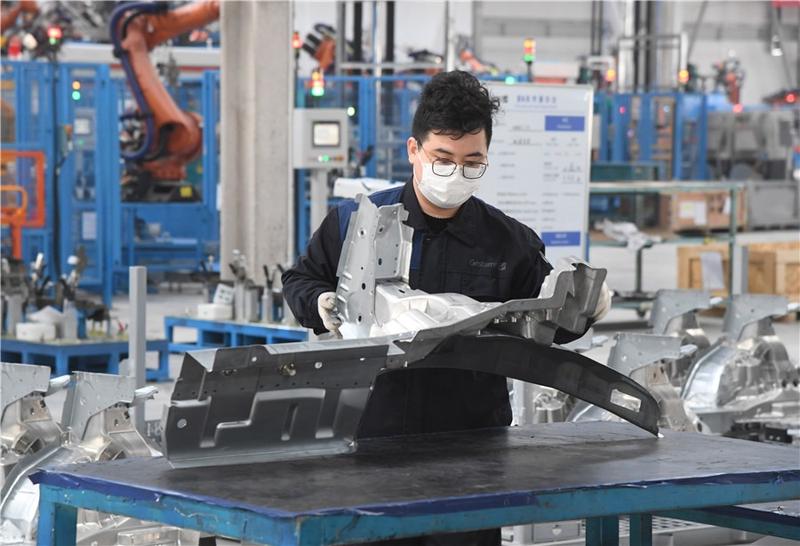 A staff member carries out product quality inspection at an auto parts manufacturing company in Beijing on Feb 10, 2020. (PHOTO / XINHUA)

China will not change its production and operational goals and reform tasks set at the beginning of the year for its centrally administered State-owned enterprises, despite the temporary impact of the epidemic of novel coronavirus pneumonia, senior State assets regulators said on Tuesday.

Ren Hongbin, vice-chairman of the State-owned Assets Supervision and Administration Commission of the State Council, said central SOEs have resumed production in an orderly manner, on the precondition of having sufficient materials and means to prevent and control the novel coronavirus.

Central SOEs have resumed production in an orderly manner, on the precondition of having sufficient materials and means to prevent and control the novel coronavirus, said an official

Even though the services sector－especially tourism, civil aviation, hotel and retail businesses－have borne the brunt of the slowdown in February, Ren stressed that the economic impact is only temporary because China is a large country with strong resilience, huge potential and enough space to keep its economic growth on firm footing.

The impact of the virus will not change the long-term fundamentals of the Chinese economy, he said, adding that with the alleviation and eventual elimination of the epidemic, demand in service sectors will "rebound and gradually return to the normal state".

Apart from resuming work at home, Peng Huagang, secretary-general of the SASAC, said central SOEs have taken flexible measures, such as adopting online operational platforms and shifting some work back to domestic facilities.

"For some new infrastructure and manufacturing projects, central SOEs have shifted much work back to their plants in China to ensure the work can be properly continued after the coronavirus outbreak," he said.

Central SOEs have encouraged local employees and third-party resources in overseas markets to better allocate resources and continue projects in an orderly way.

To prevent infection from the coronavirus, the subsidiaries of central SOEs have been told not to send any staff to foreign countries to carry out overseas business plans.

The airport is currently under renovation and is expected to come into service in the second half of this year.

To avoid possible customs clearance barriers in other countries, the Beijing-headquartered China Chamber of International Commerce has advised Chinese enterprises operating in overseas markets to increase their purchases of production materials and machinery parts from third-party countries during the epidemic, the chamber said in an online statement on Monday.