China at most crucial stage of virus prevention, control 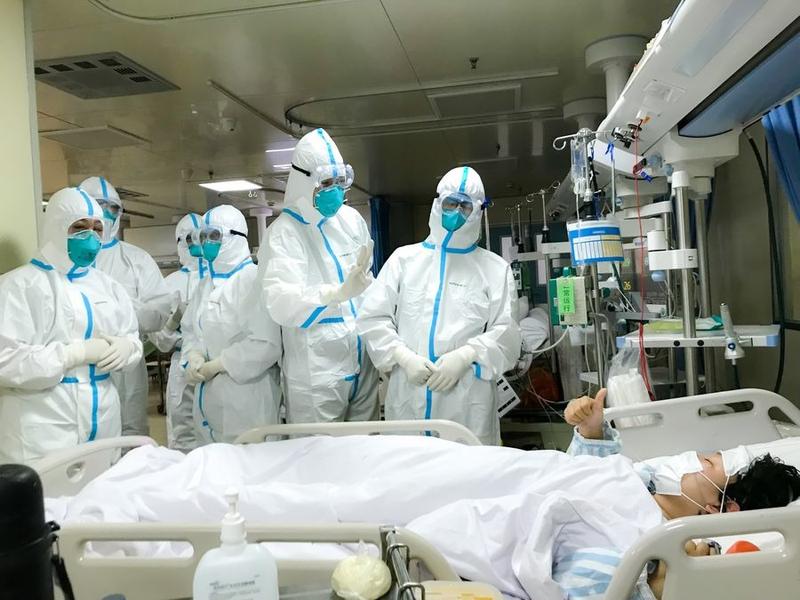 WUHAN - The prevention and control of the novel coronavirus (COVID-19) outbreak is currently at its most crucial stage in China and Wuhan, capital city of Hubei province and the epicenter of the epidemic, remains the main battlefield, a senior official with the National Health Commission said Saturday.

"In an effort to lower the infection rate, Hubei province, especially Wuhan city, will strengthen prevention and control forces at the community level and promote targeted management so as to enable the communities to serve as a strong fortress against the epidemic," said Wang Hesheng, deputy head of the commission and member of the standing committee of the Hubei provincial Party committee, at a press conference.

The total number of medical workers (sent to Hubei) has far exceeded that for rescue in the 2008 Wenchuan earthquake, and we did it at a much faster speed

A total of 217 medical teams with 25,633 medical workers had been sent to Hubei to help combat the COVID-19 as of Friday. Of the medical workers, 20,374 are now working in Wuhan, figures from the NHC show.

Wang, also a member of the standing committee of the Hubei provincial Party committee, noted that the figure excluded medical staff sent by the military.

"The total number of medical workers has far exceeded that for rescue in the 2008 Wenchuan earthquake, and we did it at a much faster speed," he added.

Three mobile P3 laboratories were also dispatched to the epicenter for epidemic control.

Medics in aid made great sacrifices and braved the virus outbreak on the front line, Wang said, expressing respect to the medical workers.

China has been pooling quality resources to step up treatment for severe and critical cases of the COVID-19 in Wuhan, which account for about 18 percent of all the confirmed and hospitalized cases in the city.

Up to 30 to 39 percent of patients infected with the COVID-19 have been discharged from two of Wuhan's hospitals that take in severe patients, including the Jinyintan Hospital, according to the National Health Commission

Health authorities have designated hospitals in Wuhan to receive severe and critically ill patients in isolated areas, Jiao Yahui, another official with the NHC, told reporters at the same press conference.

A team of experts makes daily evaluations on all of the hospitalized patients in severe condition and holds discussions and consultations on difficult and complicated cases. "We make sure that the patients receive timely and effective treatment," Jiao said.

Most of the patients whose symptoms are severe or ultimately deadly are seniors with existing diseases and were already in severe or critical condition when they were hospitalized, Jiao noted.

Up to 30 to 39 percent of patients infected with the COVID-19 have been discharged from two of Wuhan's hospitals that take in severe patients, including the Jinyintan Hospital, according to the NHC.

For severe and critically ill patients, antivirus treatment, together with treatment combining traditional Chinese and Western medicine and supportive treatments, such as the use of ventilator, blood plasma from recovered patients and extracorporeal membrane oxygenation (ECMO), have shown effect, Jiao said.

Since the beginning of the outbreak, the government has attached importance to both traditional Chinese medicine and Western medicine by mobilizing the strongest scientific research and medical forces in both fields to treat the patients

"Recently, we have been urging doctors to use ECMO at an early stage to help restore patients' blood oxygen saturation and reduce fatalities," Jiao added.

Data from the NHC show that traditional Chinese medicine (TCM) has been applied in treating more than half of the confirmed patients of COVID-19 infection in Hubei province.

"Since the beginning of the outbreak, the government has attached importance to both TCM and Western medicine by mobilizing the strongest scientific research and medical forces in both fields to treat the patients," Wang said, noting that the combination of TCM and Western medicine in treatment is an important feature of the fight against the epidemic.

TCM universities and hospitals across the country have sent 2,220 medical workers to Hubei to help combat the epidemic, according to Wang.

TCM has also been used in the prevention and control of COVID-19 at the community level, he added.

"By coordinating the resources of traditional Chinese and Western medicine, we strive to improve the cure rate and reduce fatalities by the greatest possible amount to effectively safeguard the safety and health of the people," Wang noted.

Nine temporary hospitals with more than 6,960 beds have opened in Hubei, with 5,606 patients infected with the novel coronavirus are receiving treatment in these hospitals currently, according to the NHC.

The temporary hospitals were converted from existing venues, including gymnasiums and exhibition centers.

"We will continue to transform some hospital wards and venues into designated hospitals and temporary hospitals, to make sure the confirmed patients and suspected patients can receive centralized treatment and no patients are left unattended," said Wang.