HK doctor fights on in Shenzhen with faith 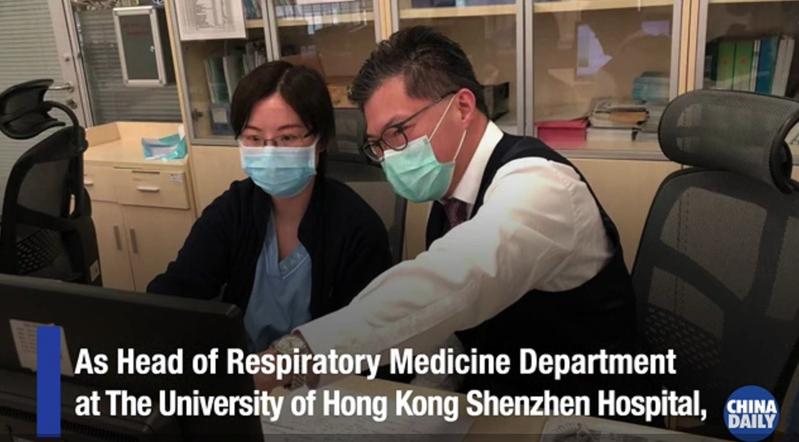 The novel coronavirus epidemic, which has yet to show signs of easing, left Hong Kong doctor Hui Kim-ming in a quandary — whether to stay with his family in the SAR or continue attending to his patients in Shenzhen?

The 44-year-old medical practitioner has been spending four hours each day over the past seven years commuting between Hong Kong and the University of Hong Kong-Shenzhen Hospital in Shenzhen, where he works.

We managed to control the SARS epidemic. I believe, this time, we can also make it

He does clinical work and teaches on both sides of the boundary as well as his normal duties. Despite his hectic schedules, Hui still tries to find time to spend with his family. “During the day, I belong to Shenzhen. At night, I belong to Hong Kong,” he said in jest.

The epidemic, which broke out in the Hubei provincial capital Wuhan in late December, had put the doctor’s daily commute between Hong Kong and Shenzhen on hold after the HKSAR government ordered on Feb 8 that all people who had visited the mainland in the two weeks prior to entering Hong Kong will be subject to a mandatory quarantine of 14 days.

Hui was forced to choose between remaining in Hong Kong and work from home, or staying in Shenzhen to help fight the epidemic with his medical colleagues on the mainland.

Remaining in Hong Kong, undoubtedly, would allow him to offer much needed care for his family amid the epidemic. Staying in Shenzhen would mean having to find accommodation, and coping with longer working hours besides the high risk of being infected with the disease.

But, after careful consideration, Hui chose to stay in Shenzhen, at least for the next three months, until the Hong Kong quarantine requirement ends. The doctor, who heads the Respiratory Medicine Department of the Shenzhen hospital, says his patients are his top priority.

Hui Kim-ming (right), head of the Respiratory Medicine Department of University of Hong Kong-Shenzhen Hospital poses for a photo with a colleague outside an observation ward of the hospital. (PHOTO PROVIDED TO CHINA DAILY)

As of Friday, the epidemic had killed more than 1,300 people and infected over 63,900 others across the mainland. Shenzhen has reported at least 400 infections, surpassing the number of people diagnosed with the disease in the other three first-tier cities — Beijing, Shanghai and Guangzhou — although Shenzhen has the lowest population among the top-tier cities. Hong Kong had recorded 56 confirmed cases as of Friday.

Including Hui, 19 Hong Kong doctors at the hospital are staying in Shenzhen, accounting for about half of the hospital’s medical staff from the SAR

Since Shenzhen’s first coronavirus patient was hospitalized early last month, shortly after the outbreak in Wuhan, the University of Hong Kong-Shenzhen Hospital, located in the city’s Nanshan district, has gone into top gear to fight the epidemic.

The hospital’s outpatient unit dealing with fever patients has admitted 1,000 patients since early January. To prevent cross-infection, the unit has set aside several outdoor independent wards, specifically for such patients.

The situation continued to deteriorate. By Jan 24, Shenzhen had recorded 20 confirmed cases, while Hong Kong had reported five. Hui Went back to Shenzhen on the first day of the Year of the Rat, after spending Lunar New Year’s Eve with his family in Hong Kong.

Carrying a little luggage with him, Hui didn’t intend to stay long in Shenzhen, possibly less than 10 days. But, he was forced to remain in the southern Guangdong city after Hong Kong enforced the mandatory quarantine measure on all travelers arriving from the mainland.

Hui had to stay in a hotel near the hospital and foot the bill himself, while spending most of his time at work.

Helming the hospital’s Respiratory Medicine Department, Hui plays a key role in the efforts to curb the epidemic, which can cause severe respiratory problems for patients.

Doctors are also human beings. They do feel tired and depressed at work and worry about the epidemic. Despite the pressure, they continue to do their job. I think this is professionalism

The hospital has so far admitted some 50 patients suspected to have contracted the coronavirus, taking up almost all the respiratory isolation observation wards in three sections. To cope with the potential growing demand, the remaining wards in the other two sections are expected to be in operation soon.

Besides dealing with the hospital’s overall preventive measures against the disease, Hui monitors the patients’ health, sometimes working late into the night.

There are also some 50 other patients in the hospital with illnesses unrelated to the coronavirus, including seasonal influenza, asthma and lung cancer. There are 14 doctors in the department attending to more than 100 patients.

Despite the heavy workload, Hui is coping well. He believes what he’s doing pales in comparison to that of front-line nurses, who have to endure relatively long periods of close contact with suspected infected patients.

“Doctors are also human beings. They do feel tired and depressed at work and worry about the epidemic. Despite the pressure, they continue to do their job. I think this is professionalism,” said Hui.

Including Hui, 19 Hong Kong doctors at the hospital are staying in Shenzhen, accounting for about half of the hospital’s medical staff from the SAR. From this week, the hospital has begun offering them accommodation. The hospital is also negotiating with the SAR government on whether it’s possible to exempt these doctors from mandatory quarantine when they return to Hong Kong.

Despite the pressures of battling the epidemic, Hui is generally positive and confident the nation will ride it out, based on the experience it has acquired from dealing with the SARS epidemic in 2003, as well as the control measures in force.

“We managed to control the SARS epidemic. I believe, this time, we can also make it.”

Zheng Wanying contributed to this story.