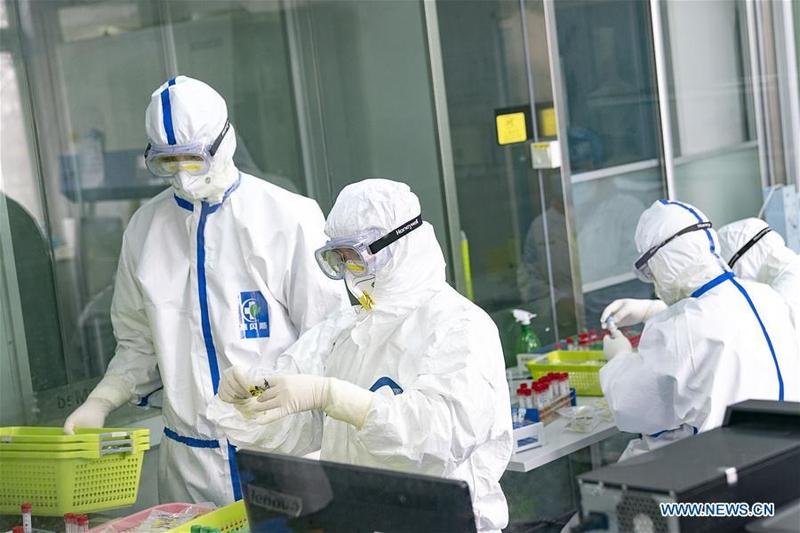 Staff members work in a laboratory in Wuhan, central China's Hubei province, Feb 13, 2020. As a designated service provider of nucleic acid detection of the novel coronavirus, the KingMed Diagnostics laboratory in Wuhan conducts non-stop detection service and detects over 2,000 samples from various cities in Hubei every day. (XIONG QI / XINHUA)

The latest figures bring the total number of confirmed cases in the hard-hit province to 51,986

The latest figures bring the total number of confirmed cases in the hard-hit province to 51,986.

Wuhan, the provincial capital, recorded a total of 35,991 confirmed cases, including 14,031 clinically diagnosed ones.

The province also saw 690 patients discharged from hospital after recovery on Thursday, including 214 clinically diagnosed cases.

Among the 36,719 hospitalized patients, 7,593 were still in severe condition and another 1,685 in critical condition.

To ensure timely treatment for more patients and further curb spread of virus, Hubei regards those with pneumonia-related computerized tomography scan results but not yet tested positive for the virus as confirmed cases.

READ MORE: WHO: No big shift in epidemic despite spike in China virus cases

Meanwhile, the daily new confirmed cases outside Hubei have been dropping for 10 consecutive days, according to the National Health Commission.

A total of 267 new confirmed cases were reported on Thursday outside Hubei, data showed Friday.

The commission received reports of 5,090 new confirmed cases on Thursday from 31 provincial-level regions and the Xinjiang Production and Construction Corps, including 4,823 in Hubei.