Local heroes help in the battle against epidemic

By Zhou Lihua in Wuhan and Zhao Yimeng in Beijing

Editor's note: As medical professionals battle to overcome the novel coronavirus, individual residents of Wuhan, Hubei province, are also playing their part. Below, China Daily profiles some of the people whose volunteer work is making life easier for their peers at this difficult time. 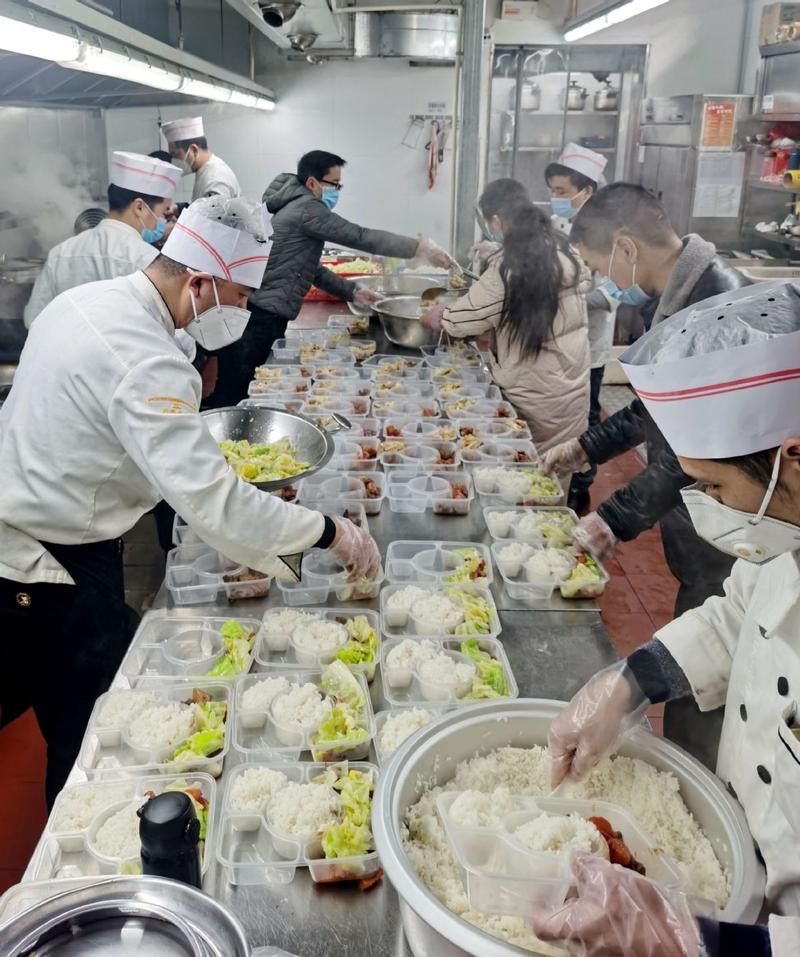 Before the Spring Festival holiday, Shen Zilong reserved foodstuffs worth 600,000 yuan (US$86,000) to satisfy the predicted mammoth demand for family reunion dinners.

The 26-year-old didn't expect the novel coronavirus to rapidly spread across his city and the whole country, bringing people from all walks of life onto the front line to combat the epidemic.

The disease inevitably dragged down dinner orders dramatically, but rather than worry about his company's falling profits, Shen resolved to make the best use of his catering resources by volunteering to deliver lunches and dinners to hospitals across Wuhan, the epicenter of the outbreak.

"When I had dinner with my family on Lunar New Year's Eve, I watched the news on TV showing exhausted medical workers eating instant noodles and pies in their offices. I was deeply moved, and as I work in the catering industry, I wanted to stand up and help," he said.

The following day, he posted a notice on WeChat to garner information from medical institutions about their food needs. In response, he received details of requirements among doctors and nurses, but he was also inundated with offers from families and friends who wanted to join his efforts.

Hospital canteens were unable to fully supply the overwhelmed medical personnel, who barely had time to eat. So, we shouldered part of the burden for them

On Jan 26, the group members began using their own cars to transport 400 meals－made at three restaurants run by Shen's company, Danqingyan Catering Group－to nearby hospitals.

As medical workers shared news of Shen's activities, meal orders arrived from 16 hospitals in Wuhan, including those designated for patients infected with the coronavirus. At the peak, the number of orders hit 1,000.

Shen said the cooks got up at 7 am every day to prepare lunches, while 13 volunteer drivers stood by at 10:30 am to make deliveries.

"Hospital canteens were unable to fully supply the overwhelmed medical personnel, who barely had time to eat. So, we shouldered part of the burden for them," Shen said, adding that the group provided two meat dishes and a vegetable dish for each person per meal, ensuring that the medics got a balanced diet.

To avoid possible transmission, the medical workers usually came out of the hospital gates to pick up the meals from Shen and other volunteers.

"One time, a doctor asked me to place the meals in the middle of the street and drive away before he came to pick them up. Some of his colleagues had become infected and he didn't want to put me at risk," Shen said.

Li Huici, an official at Yongqing in Jiang'an district, the community in which Shen's company is based, said the neighborhood office donated 400 face masks and 20 protective gowns to support the volunteer work.

Shen's deliveries ended on Feb 1, because all the foodstuffs he had in store had been consumed and market suppliers had suspended operations for the holiday period.

One time, a doctor asked me to place the meals in the middle of the street and drive away before he came to pick them up. Some of his colleagues had become infected and he didn't want to put me at risk

However, after Shen came up with the idea of free meal deliveries, other restaurants followed his lead and provided similar services.

"On our last delivery, we explained the situation to each hospital and shared the contact numbers of my colleagues in the industry with them, hoping they could maintain the service," Shen said.

He added that the medical workers were happy with the meals his group delivered, so he was trying to find a vegetable supplier to provide foodstuffs for his company.

On Feb 3, Zhang Yichi took a project engineer from Wuhan Railway Station to Leishenshan Hospital, which was built in the past two weeks to treat patients infected with the coronavirus.

It was the first booking Zhang had received that day, nearly two weeks after Wuhan suspended public transportation including buses, railways and ferries on Jan 23 in an attempt to contain the spread of the deadly virus.

To facilitate the commutes of medical workers and other frontline personnel, groups of citizens had volunteered to provide pickup services. Zhang, a 31-year-old Wuhan native, was among them.

Given the severe situation in the city, he was a little hesitant to give rides to medical workers on Jan 25, the first day of the volunteer work which was also Chinese New Year's Day.

"It was the medical personnel who gave me confidence, as I found that the high risk of becoming infected was not their greatest concern; most were more worried about how they would get to work the next day," he said.

That day, he gave rides to five passengers. In his journal, he noted: "The medical workers are brave and diligent. I have no reason to be afraid." 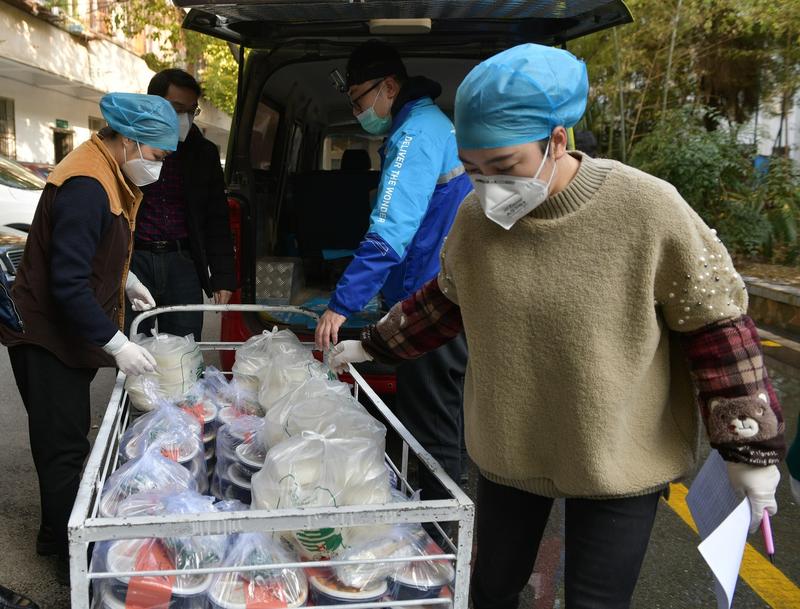 The coordinator of the group informed all the drivers of the trips the night before they were needed and the volunteers chose the orders based on their itineraries, Zhang said.

On Jan 26, he undertook four long-distance trips, with each covering 20 to 40 kilometers across different districts. "I only came back at 8 pm because I was starving and exhausted. It's not safe to eat or drink outside," he said.

During his chats with the medical workers, he was impressed by the support and understanding shown by their families.

"I gave a ride to a young nurse who lived about 40 to 50 minutes'walk from the hospital. Her parents once walked to meet her and ensure she would be safe when she finished her night shift. The three of them walked another 50 minutes back home together," Zhang said, stressing that he had been greatly touched by this small detail.

Some medical personnel sent me photos of their certificates and told me to present them to the traffic police if they wouldn't let me through. 'Tell them you are taking a medical worker home'. It (the sentiment) was very, very warm

He received a bag of surgical masks and a small spray bottle of medical alcohol from his passengers.

"The nurse reminded me to change my face mask every four hours and showed me how to spray the alcohol before changing it, like spraying perfume," he said.

"Some medical personnel sent me photos of their certificates and told me to present them to the traffic police if they wouldn't let me through. 'Tell them you are taking a medical worker home'. It (the sentiment) was very, very warm," he recorded in his journal.

The volume of bookings fell after the first and second days of the Lunar New Year, as taxies and buses dispatched by the local government gradually came into service.

Zhang noted that hotels provided free accommodations for medical personnel working at nearby hospitals, which relieved the traffic burden.

Having majored in biochemistry and excelled at English, Zhang also helped translate details of supplies donated by other countries. He was joined by his wife, who teaches French and also speaks Japanese.

"If they need volunteers to do nucleic acid testing someday, I will definitely raise my hand," Zhang said.

He wrote in his journal: "Still, there are many people working outside, such as police officers, sanitation workers, couriers and construction workers. I am just a tiny part of this battlefield. We should pay tribute to everyone fighting the epidemic."

At 3 am on Jan 23, Wang Li received a message from a friend, who said Wuhan would be sealed off in seven hours and all public transportation was being suspended.

"I hesitated when my friend suggested that we should leave the city immediately," Wang said.

As a full-time driver for the carhailing platform Didi Chuxing, she realized that local residents would only be able to rely on private cars and taxies during the lockdown. "So, I chose to stay so that I could make a contribution to the journeys of patients and residents," she said.

Although the coronavirus is highly infectious, Wang doesn't regard it as being worse than the earthquake. She believes it can be contained by medical technology

The 29-year-old is no stranger to tough times, having survived the 2008 Wenchuan earthquake in Sichuan province.

"When the quake struck, I was in the new site of our school (in nearby Deyang), which had only been built two years before. The building was fine, so I didn't lose my life, but the old site of our school collapsed, resulting in the deaths of 240 students," she recalled.

It was arranged that she should finish high school in Beijing, and she was later awarded a yearlong internship in the capital because she had nowhere to live in her hometown.

"Many people lent a helping hand at that time. A reporter who covered the earthquake learned about my story when he returned to Beijing. He often visited me and my classmates, bringing books and showing us around the Bird's Nest (stadium)," Wang said.

"Since the day I survived the earthquake, every day has been a gift."

Although the coronavirus is highly infectious, Wang doesn't regard it as being worse than the earthquake. She believes it can be contained by medical technology.

Now, it is Wang's turn to support those in need.

She volunteered to offer transportation services, and was sent to a community with more than 2,000 residents in Wuchang. She was responsible for picking up people whose journeys were essential and also for transporting medical supplies to communities and hospitals. 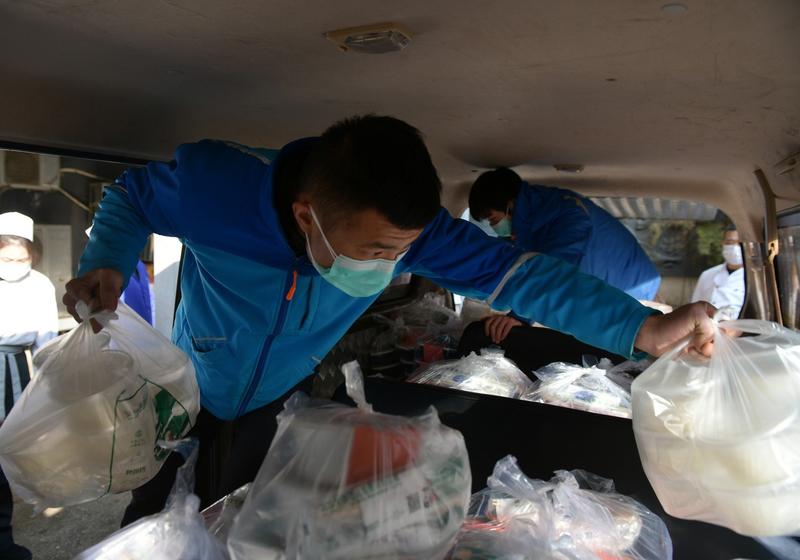 "Usually, I transported seniors with chronic illnesses so they could get treatment at the hospital. I drove a woman in her 70s who has kidney failure to her regular dialysis session, but she refused my offer to help her walk into the hospital in case I got infected," Wang said.

To avoid becoming a mobile source of infection, she wore protective gowns during the entire volunteer period and sprayed disinfectant in the car after every trip.

In previous years, Wang has always spent Spring Festival with her mom, her only parent, in their hometown in Sichuan, but this year she made an exception.

"I didn't tell her about the volunteer work. I played down the epidemic so she would not worry too much, and comforted her by explaining that we were taking all the necessary precautionary measures. I told her that the only reason I could not be with her was the lockdown in Wuhan," she said.

Having moved to Wuhan for work in 2018, Wang decided to stay because she loves the local food. Now, she is considering bringing her mom to live with her in the city when the situation improves.