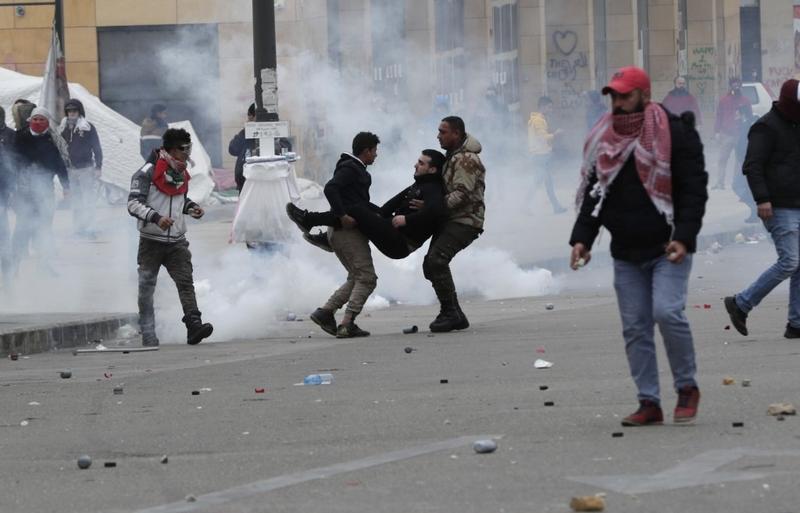 An injured Lebanese protester is carried away as security forces disperse a demonstration in the heart of Beirut to stop a confidence vote for a new government, which they say fails to address their demands and cannot rescue the ailing country, on Feb 11, 2020. (ANWAR AMRO / AFP)

BEIRUT - Scores of people were injured in Beirut on Tuesday in clashes between security forces and protesters rejecting the new government as it sought to win a parliamentary vote of confidence.

One of the world’s most heavily indebted states, Lebanon is facing an unprecedented financial crisis rooted in decades of state waste and corruption which have fueled public anger

Smoke wafted through Beirut where riot police fired tear gas at hundreds of protesters seeking to block MPs from reaching the heavily barricaded parliament. The Lebanese Red Cross said it treated 280 people for injuries, taking 39 of them to hospital.

One of the world’s most heavily indebted states, Lebanon is facing an unprecedented financial crisis rooted in decades of state waste and corruption which have fueled public anger.

Parliament Speaker Nabih Berri was quoted saying Lebanon should seek IMF technical help to draw up an emergency plan though it could not surrender itself to the IMF because the nation could not bear its conditions.

In comments reported by an-Nahar newspaper and confirmed to Reuters by a government source, Berri also said Lebanon should take a decision on whether to pay maturing foreign debt next month based on IMF advice.

Lebanon’s crisis came to a head last year as slowing flows of capital from abroad led to a hard currency crunch and protests erupted against the ruling elite.

“People are suffering and the government is not listening, said Lama Tabbara, 34, an unemployed protester. “It takes a long time to uproot an old rotten tree and that’s what the government represents.”

Eggs and paint were hurled at the cars of MPs and ministers arriving near parliament, but the session began despite the scuffles. At the start, Berri said an MP had received stitches after being hit in the face and head by stones.

Some MPs skirted the clashes, reaching parliament on the back of motorcycles Crowds chanted revolution, waved Lebanese flags and held signs that said “no confidence”.

A branch of one of Lebanon’s biggest banks, BLOM, was set ablaze. Flames engulfed the bank counter as people smashed the facade and furniture.

Banks have severely curbed savers’ access to their money and blocked transfers abroad. The Lebanese pound, pegged at the same level since 1997, has lost more than a third of its value.

'Lebanon is not Greece, Argentina'

Prime Minister Hassan Diab, whose government took office last month, read out the policy statement calling for some “painful steps” to address the crisis. It calls for moves including cutting interest rates and seeking foreign help.

His government was formed with backing from the powerful, Iran-backed Shi’ite Hezbollah, Berri’s Amal Movement and the Free Patriotic Movement (FPM) founded by President Michel Aoun.

Berri was quoted as saying Lebanon must take advantage of the time remaining before its next debt maturity on March 9 to send a message abroad, “specifically to the Americans” that the country needs IMF technical help through a rescue plan.

“There is still room for Lebanon during the coming two weeks and before the end of the current month to benefit from this measure,” Berri was quoted as saying.

Based on this, “Lebanon will be able to form its position on the maturing Eurobonds - whether to pay its commitments or not to pay them - based on what the IMF advises.”

But Berri also said that the Lebanese people would be unable to bear IMF conditions and the country was not Greece or Argentina - which have experienced their own financial crises.

Senior FPM lawmaker Alain Aoun told Reuters the country needs IMF technical assistance and should draw on IMF advice in its decision on whether to pay the Eurobond, and his party was expected to adopt the same position.