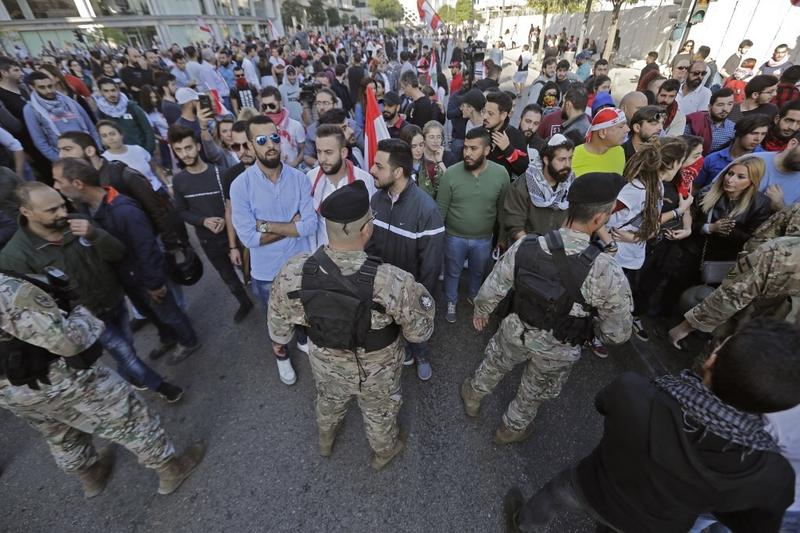 Lebanese protesters stand next to security forces near parliament headquarters in the capital Beirut on November 19, 2019. (PHOTO / AFP)

BEIRUT — Lebanon's parliament was blocked from holding its first session for two months on Tuesday after protesters prevented lawmakers from reaching the building, escalating a wave of demonstrations against rulers blamed for steering towards economic collapse.

Queues built at banks that reopened after a one-week closure, with police deployed at branches and banks imposing tight restrictions on hard currency withdrawals and transfers abroad. Lebanon has slid further into economic crisis since the protests erupted on Oct. 17.

The political situation has been deadlocked since Saad al-Hariri resigned as prime minister on Oct. 29, with no progress towards a deal on a new government

The political situation has been deadlocked since Saad al-Hariri resigned as prime minister on Oct. 29, with no progress towards a deal on a new government.

Gunfire was heard as a group of several dozen protesters forced two SUVs with official number plates and tinted windows to turn back as they approached the parliament, footage broadcast by Lebanese broadcasters showed. The vehicles sped away after they were struck by demonstrators chanting "Out, out, out!"

Authorities later announced that the session had been postponed indefinitely. The agenda of the parliamentary session had included reelecting members of parliamentary committees and discussion of a controversial amnesty law that is expected to lead to the release of hundreds of prisoners.

Parliament Speaker Nabih Berri had already postponed the session last week due to security concerns. The security forces had fanned out on Tuesday before dawn in central Beirut, shutting down roads around parliament with barbed wire in what proved to be a failed attempt to prevent the protesters from blocking the session.

Police scuffled with a group of protesters who were trying to use a cable to remove a barbed wire barricade. "How are they holding a session and not responding to the people? Those that are in the session have nothing to do with us, and it's not what we asked for," said a protester who gave her name as Maria.

The protests have been fuelled by perceptions of corruption among the sectarian politicians who have governed Lebanon for decades and are blamed for leading the country into its worst economic crisis since the 1975-90 civil war.