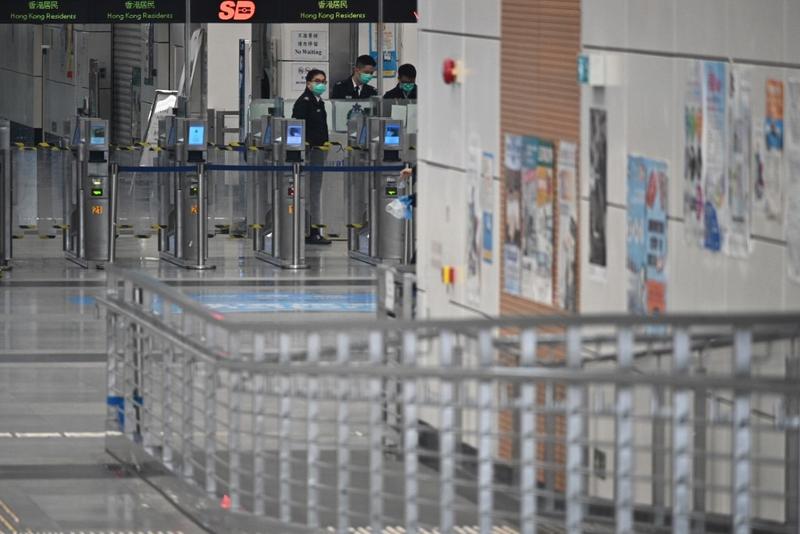 HONG KONG - Hong Kong Chief Executive Carrie Lam Cheng Yuet-ngor said on Saturday that the mandatory quarantine that came into effect on Saturday has effectively reduced people flow between Hong Kong and the Chinese mainland that is considered vital in curbing community transmission of the novel coronavirus pneumonia.

At a press briefing Saturday afternoon, Lam said that only 8,953 people had entered Hong Kong as of 4 pm. Among them, 807 came in through the Shenzhen Bay checkpoint and Hong Kong-Zhuhai-Macao Bridge checkpoint.

A total of 161 people are subject to mandatory quarantine, 148 of whom are required to stay at home, 11 in hotels and 2 staying in government designated centers.

In the early hours of Saturday, passengers on a delayed flight from Beijing became the first to undergo the new quarantine arrangement.

At the Shenzhen Bay Port, a Hong Kong resident who returned from Xinhui of Guangdong province said he would comply with the quarantine policy as the penalty has a deterring effect.

Police will organize spot-checks on those who are put under quarantine. So far 10 check-ups have been made and no one was found to have breached the rule.

The other people who entered Hong Kong mainly came from Macao, Lam said.

To contain the spread of the novel coronavirus pneumonia at the source, the government earlier announced that arrivals from the Chinese mainland will be required to be quarantined for 14 days at homes, hotels or designated centers. The policy, which was gazette on Friday, will be in effect until May 7.

Anyone who breaches the quarantine rule will face up to six months imprisonment and a fine of HK$25,000 (US$3,200).

Lam stressed that none of those quarantined under the new rule was confirmed to have been infected. Neither have they shown any symptom of infection, she added.

Meanwhile, Lam said that the Lo Wu Correction Institution, which is a major local face masks producer, was set to boost its monthly output to 2.5 million from 1.8 million, thanks to the 800 volunteers who have joined the production line.

Lam said an additional 700,000 face masks will be given freely to government outsourced cleaners.

Lam said the government’s stock of face mask, sufficient for one-month use, would be distributed first to frontline personnel, including medical workers and those officers manning the immigration and customs checkpoints.

Lam thanked the central government and the Guangdong provincial authorities for their support in temporarily suspending the issuance of tourist visas for visiting Hong Kong.

The Hong Kong Department of Health has set up hotlines for Hong Kong residents stranded in Hubei province to seek medical assistance. The SAR government has sent the first batch of medicine to some Hong Kong chronic patients in Hubei.

Lam said that people should try to avoid unnecessary social contacts and going to crowded places.

She also appealed to people who have ties with face masks suppliers to share the information with the government or donate some masks that they have bought.