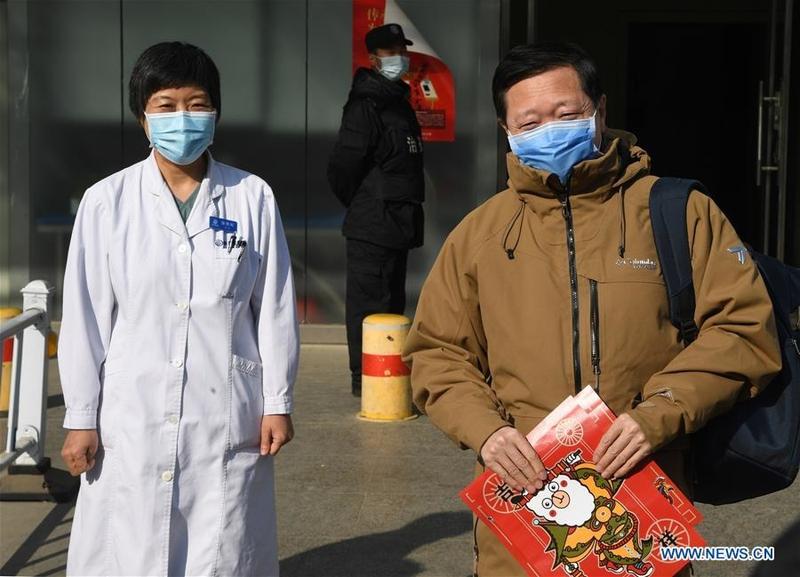 Wang Guangfa (right), head of the Department of Pulmonary Medicine at Peking University First Hospital, poses for a photo with a medical worker from Beijing Ditan Hospital in Beijing, capital of China, Jan 30, 2020. Wang has recovered from the coronavirus and is discharged from the hospital. He was the fifth coronavirus-infected patient that was cured in Beijing. (REN CHAO / XINHUA)

BEIJING - Chinese health authorities announced Friday that 9,692 confirmed cases of pneumonia caused by the novel coronavirus had been reported in 31 provincial-level regions and the Xinjiang Production and Construction Corps by the end of Thursday, and the number of fatalities now stands at 213.

Since the outbreak of the novel coronavirus epidemic, the Chinese government has been taking the most comprehensive and rigorous prevention and control measures with a high sense of responsibility for people's health.

Hua made the remarks in a press statement after the World Health Organization (WHO) said the novel coronavirus outbreak has become a Public Health Emergency of International Concern.

"Since the outbreak of the novel coronavirus epidemic, the Chinese government has been taking the most comprehensive and rigorous prevention and control measures with a high sense of responsibility for people's health," Hua said, adding that many of these measures go well beyond the requirements of the International Health Regulations.

She also noted that China has informed relevant sides and shared the genome sequence of the coronavirus in a timely manner with openness, transparency and a responsible attitude.

Hua noted that China has been in close communication and cooperation with WHO.

Noting that WHO Director-General Tedros Adhanom Ghebreyesus has commended China's efforts and spoke highly of China's great contribution to the world by fighting against the novel coronavirus, Hua said the country will continue working with WHO and other countries to safeguard regional and global public health security.

The National Health Commission said in its daily report that 1,527 patients remained in critical condition, and 15,238 people were suspected of being infected with the virus as of the end of Thursday.

A total of 171 people had been discharged from hospital after recovery.

There were 1,982 new confirmed cases, 4,812 new suspected cases, and 43 fatalities on Thursdsay

There were 1,982 new confirmed cases, 4,812 new suspected cases, and 43 fatalities- 42 in Hubei province and one in Heilongjiang province - on Thursday.

Also on Thursday, 157 patients became seriously ill, and 47 people were discharged from hospital after recovery.

In Hubei province, besides the 42 fatalities, local health authorities said there were 1,220 new confirmed cases of pneumonia on Thursday.

The provincial capital Wuhan reported 378 new infections and 30 new fatalities, while the cities of Xiaogan and Xiangyang reported 142 and 123 new confirmed cases, respectively, according to the Hubei Provincial Health Commission. Twenty-six patients were discharged from hospital in the province Thursday.

By Thursday, the province had 5,806 confirmed cases, with 204 deaths and 1,094 cases in severe or critical condition. The province has seen 116 patients discharged from hospital.

The commission hoped the international community understand and support China's efforts in preventing and controlling the epidemic, and make concerted efforts with China to contain the epidemic and maintain global health security according to the suggestions of the International Health Regulations and WHO.