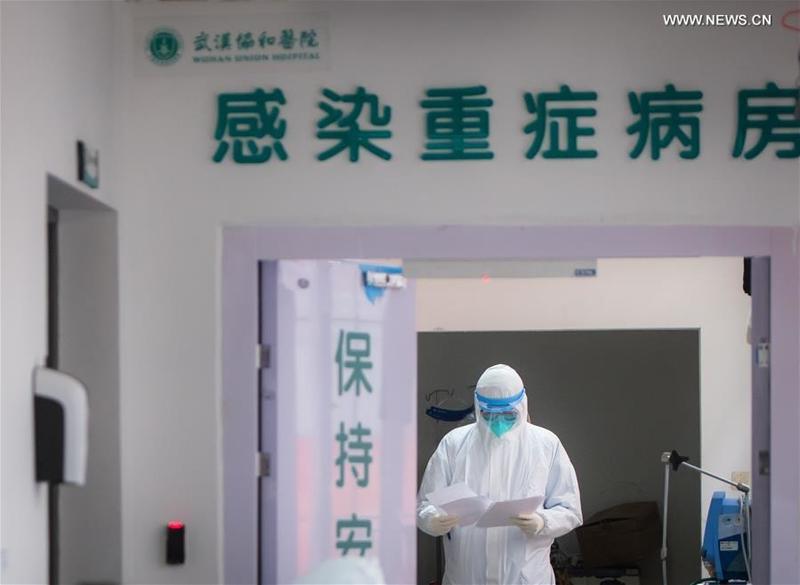 BEIJING - Chinese health authorities announced Wednesday that 5,974 confirmed cases of pneumonia caused by the novel coronavirus had been reported in 31 provincial-level regions by the end of Tuesday. A total of 132 people have died of the disease.

Among the total, Hubei province in central China reported a total of 3,554 confirmed cases. Wuhan, the provincial capital, is the center of the outbreak.

Tuesday saw 1,459 new confirmed cases, and 26 deaths - 25 in Hubei province and one in Henan province

The total number of confirmed cases on the Chinese mainland has exceeded the total number of SARS cases during its outbreak in 2003, but a senior public health expert said the new virus appears to be less severe than SARS and there is no need for panic.

Zeng Guang, chief epidemiologist at the Chinese Center for Disease Control and Prevention, noted that the new virus is more difficult to control and prevent than SARS, as it can also transmit between humans during the incubation period.

With the lockdown of Wuhan, the epicenter of the epidemic, the number of cases exported from the city will gradually fall, so the rise in cases in other parts of China will also be put under control, Zeng said.

Meanwhile, the warming weather will restrain the spread of respiratory diseases and contribute to control and prevention of the virus, he said.

The National Health Commission said in its daily report that 1,239 patients remained in critical conditions, and 9,239 people were suspected of being infected with the virus as of the end of Tuesday.

A total of 103 people had been discharged from hospital after recovery.

Tuesday saw 1,459 new confirmed cases, 3,248 new suspected cases, including the first suspected case in Lhasa, capital of the Tibet autonomous region, and 26 deaths - 25 in Hubei province and one in Henan province.

The patient diagnosed in Lhasa, surnamed Zhang, 34, is from the city of Suizhou in Hubei province. He came to Lhasa by train from Wuhan on Jan 24 and was hospitalized on Jan 25. The regional center for disease control and prevention later diagnosed him as a suspected case on Tuesday.

The patient's vital signs are stable, and close contacts have been put under medical observation.

Also on Tuesday, 263 patients were seriously ill, and 43 people were discharged from hospital after recovery.

With inputs from Wang Xiaodong