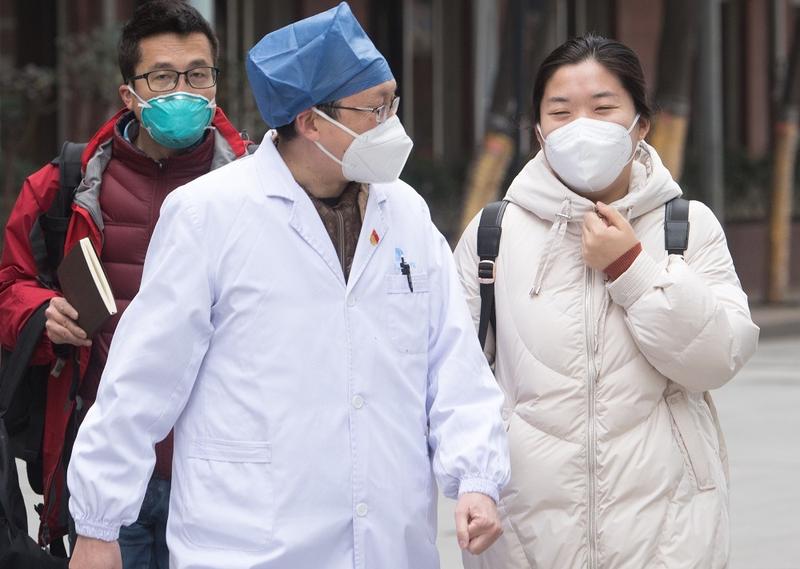 An infected medical staff who has fully recovered (right) talks to her colleague after she was discharged from the hospital, in Wuhan, Jan 28, 2020. (PHOTO / XINHUA)

Calling The Sun's report "completely groundless", a spokesperson for the Chinese embassy in London said on Monday that "China has provided necessary assistance and facilitation to countries who wish to bring back their citizens from Wuhan in accordance with internationally accepted practice and epidemic prevention rules."

The Sun reported on Monday that the UK planned to send a rescue plane to bring back hundreds of British citizens who are trapped in Wuhan, but "a Foreign Office source revealed" that Chinese "officials have told all countries its lockdown will not be lifted for repatriation flights".

The relevant report of The Sun does nothing but disrupt the disease prevention and control efforts at a critical moment when people throughout China are joining hands to bring the virus under control. This is immoral, irresponsible and unacceptable.

Spokesperson for the Chinese embassy in London

The spokesperson said that the UK embassy in China has clarified that "the news is completely inaccurate. The Foreign and Commonwealth Office in London is contacting the journalist to correct their understanding of this case. We can assure you that these inaccurate messages have not come from our government."

The Chinese embassy spokesperson demanded that "The Sun should right the wrong and clarify immediately."

The spokesperson accused The Sun of fabricating stories and creating chaos. "The relevant report of The Sun does nothing but disrupt the disease prevention and control efforts at a critical moment when people throughout China are joining hands to bring the virus under control.

"This is immoral, irresponsible and unacceptable."

The spokesperson emphasized that since the outbreak of the disease in Wuhan and other places, "the Chinese government has demonstrated a strong sense of responsibility for the people in China and around the world".

Firm and timely measures such as the fast mapping and sharing of the novel coronavirus DNA information worldwide have been taken to combat the virus and prevent it from spreading globally.

"People throughout China are mobilized to fight the disease shoulder to shoulder, with the confidence, resolve and capability to beat the virus," said the spokesperson.

The spokesperson also hailed that British people "from all walks of life have also come forward to offer their help, which is touching and encouraging".