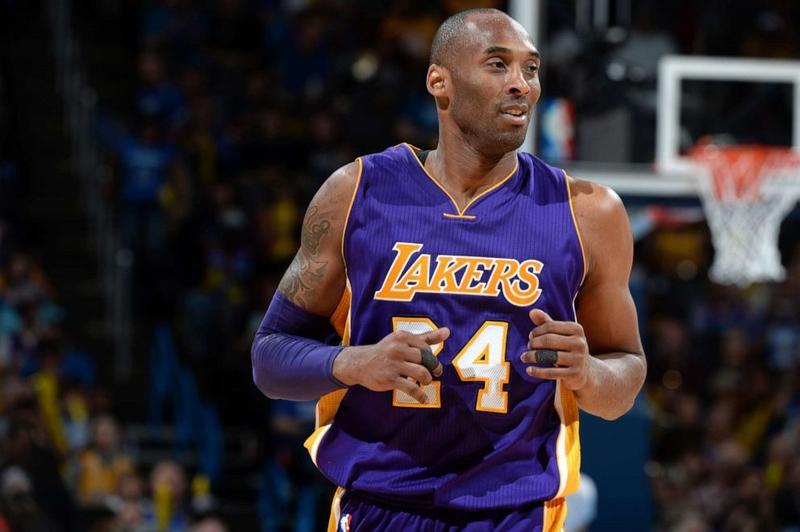 CALABASAS, Calif - Kobe Bryant, one of the NBA’s all-time greatest players and an athlete of global renown, was killed at age 41 on Sunday in a helicopter crash near Los Angeles along with his 13-year-old daughter and seven on board, officials said.

Bryant rocketed to fame as an 18-year-old rookie and played 20 years for the Los Angeles Lakers, 18 as an all-star forward, and won five NBA championships.

His death sent shockwaves through the National Basketball Association, which he helped propel to international prominence, and stunned fans around the world.

The cause of the crash was unknown, and an investigation by the Federal Aviation Administration and the National Transportation Safety Board could take months.

Bryant was known since his playing days to travel frequently by helicopter to avoid the Los Angeles area’s notorious traffic. 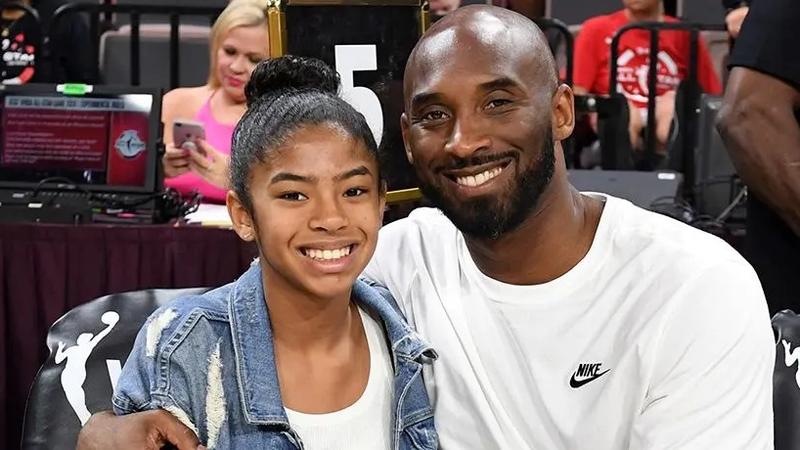 His Sikorsky S-76 craft went down in low clouds and foggy weather shortly before 10 am (1800 GMT) in hilly terrain just outside Calabasas, California, about 65 km northwest of central Los Angeles, sparking a brush fire, officials said.

“There were no survivors,” county sheriff Alex Villanueva told a news conference, saying the flight manifest showed nine people on board. He declined to identify them.

NBA Commissioner Adam Silver confirmed Bryant and his daughter Gianna were among those killed, and sent condolences to Bryant’s wife, Vanessa.

“He was one of the most extraordinary players in the history of our game, with accomplishments that are legendary,” Silver said, as tributes poured in from players, politicians and entertainers.

The fire and debris field from the crash spread over a quarter-acre of steep terrain in the grass-covered foothills of the Santa Monica Mountains, county Fire Chief Daryl Osby said. 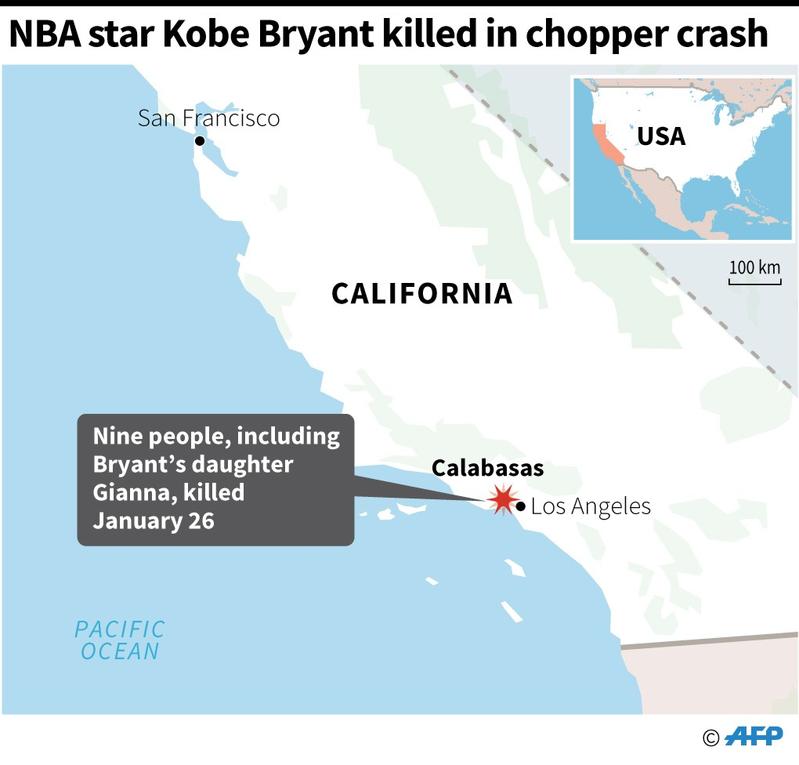 This AFP graphic shows a map locating Calabasas near Los Angeles where nine people were killed in a helicopter crash, including NBA star Kobe Bryant and his daughter Gianna.

Others on board besides the pilot were a teammate from Bryant’s daughter’s basketball squad and a parent of the teammate, NBC News reported.

Weather was likely to figure prominently in the crash investigation. Fog in the area was so bad that the Los Angeles Police Department had grounded its helicopter fleet on Sunday morning, the Los Angeles Times and CNN reported.

‘Kobe we love you’

Reaction to Bryant’s death was swift, and moments of silence were observed before some of Sunday’s NBA games.

In San Antonio, the Toronto Raptors and San Antonio Spurs allowed the 24-second shot clock to expire on each of their first possessions, in tribute to Bryant’s jersey number, 24. 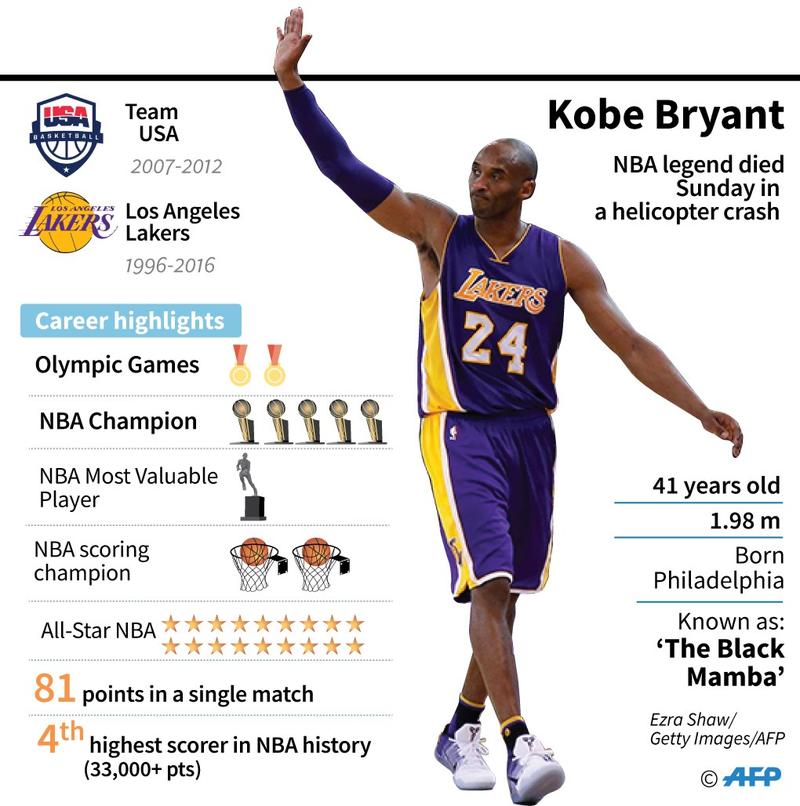 “I am in shock over the tragic news of Kobe’s and Gianna’s passing. Words can’t describe the pain I’m feeling,” said Michael Jordan, who won six NBA championships with the Chicago Bulls.

“Kobe was an amazing dad who loved his family deeply - and took great pride in his daughter’s love for the game of basketball.”

Stunned fans gathered near the Lakers’ home arena, the Staples Center in downtown Los Angeles, surrounding a wreath with the message: “Kobe we love you RIP.”

Some in the crowd dabbed tears as others laid flowers and basketball sneakers at the wreath. Fans wore both his No 24 and No 8 jerseys, breaking the somber mood with occasional chants of “Kobe, Kobe.”

Hours later, inside the arena, musicians and performers paid tribute to Bryant from the stage of the Grammy Awards.

One of a handful of internationally recognized athletes known simply by their first names, Bryant was an avid supporter of soccer and women’s basketball.

He spoke Spanish as well as Italian, having spent part of his youth in Italy, where his father, former NBA player Joe “Jellybean” Bryant, played several seasons professionally. 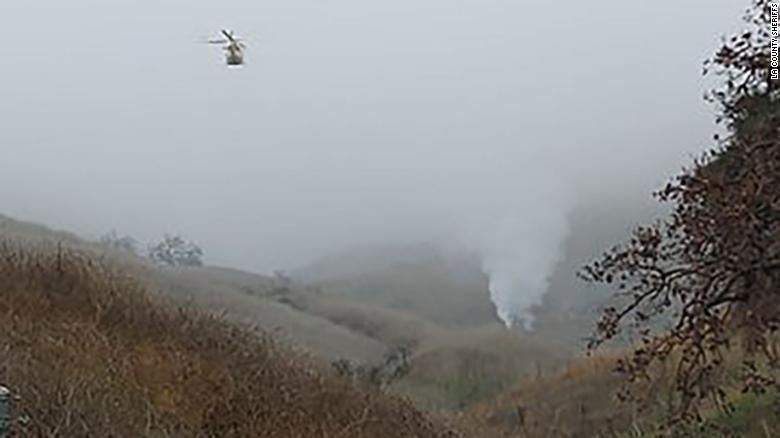 A helicopter crashed on a hillside in Calabasas, California, Jan 26, 2020. (PHOTO / CHINA DAILY.COM.CN)

He also won an Oscar in 2018 as writer-producer of that year’s best animated short film, “Dear Basketball,” which Bryant also narrated, and he sometimes mingled with show-business stars in Los Angeles.

‘Much more than an athlete’

“Most people will remember Kobe as the magnificent athlete who inspired a whole generation of basketball players. But I will always remember him as a man who was much more than an athlete,” Kareem Abdul-Jabbar, the all-time NBA scoring leader and former Laker, said on Twitter.

Bryant was accused of sexual assault in 2003 by a woman who worked at a Colorado hotel, tarnishing his reputation and setting off a media storm over the case. Bryant denied the accusations, and charges eventually were dismissed after his accuser refused to testify.

Bryant and his wife filed for divorce in 2011 after 10 years of marriage, but the couple said in 2013 they had reconciled.

Besides Gianna, they had three other daughters: Natalia, Bianca and Capri, who was born in June 2019. 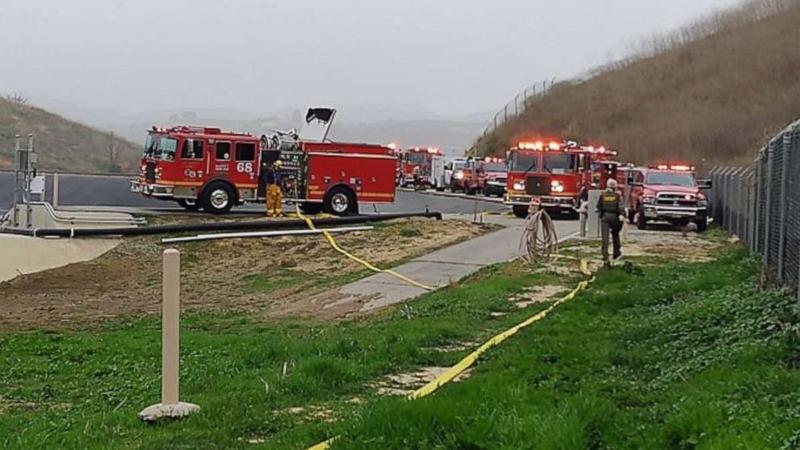 First responders on the scene of a helicopter crash in Calabasas, Calif, Jan 26, 2020. (PHOTO / CHINADAILY.COM.CN)

Bryant, who played all 20 of his NBA seasons with the Lakers, also won two Olympic gold medals as a member of the US men’s basketball team in 2008 and 2012.

Nicknamed “The Black Mamba,” he became eligible to enter the Hall of Fame this year and is certain to be selected when the 2020 class is enshrined.

Bryant demonstrated from an early age he would surpass the accomplishments of his father, who played eight seasons in the NBA.

The Philadelphia native went straight from high school to the NBA, skipping the college ranks. Since he was just 17 at the time, his parents needed to co-sign his first contract with the Lakers. He played his first game with the team soon after turning 18 in 1996.

He was the third-leading scorer in league history with 33,643 points, until LeBron James surpassed him on Saturday.

In his final tweet, Bryant saluted James’ achievement, writing: “Continuing to move the game forward @KingJames. Much respect my brother.”