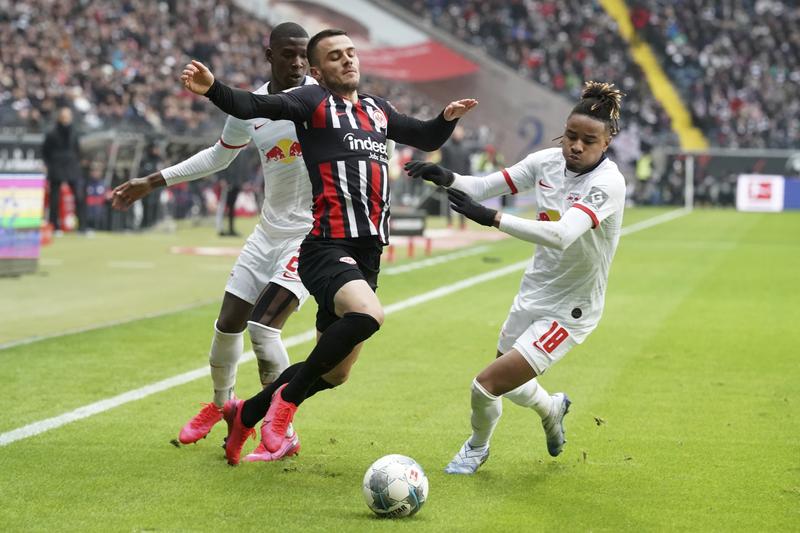 BERLIN - Eintracht Frankfurt stunned front runners Leipzig 2-0 and ended their nine-game unbeaten run at the 19th round in Bundesliga on Saturday.

Despite the defeat, front-runners Leipzig stay atop the standings whereas Frankfurt jumped to the 9th position in the Bundesliga standings

Leipzig controlled the proceedings in the first half but the second-half goals from Almamy Toure and Filip Kostic gifted Frankfurt the win on home soil.

The visitors gained the upper hand from the kick off and created a half-chance through Patrik Schick who headed on target with just seven minutes played.

Leipzig should have opened the scoring moments later but Timo Werner were unable to beat Frankfurt goalkeeper Kevin Trapp from promising position.

Julian Nagelsmann's men remained on the front foot but Trapp seemed to be an insuperable barrier as the goalkeeper defused the opportunities from Schick and Christopher Nkunku in the 17th minute.

Frankfurt failed to establish their style of play and reaped a half-chance through David Abraham with 38 minutes into the first half.

After the restart, Frankfurt caught the Bundesliga leaders flat footed and broke the deadlock with their only second attempt on target as Toure drilled a volley from the edge of the box past Leipzig custodian Peter Gulacsi in the 48th minute.

Leipzig responded well and controlled possession but Frankfurt staged a well-positioned defence and disrupted the visitor's build up.

The "Bulls" pressed frenetically without posing a lot of threat, but the "Eagles" killed the game in the closing period when Kostic utilized a square pass from Goncalo Paciencia to sew up all three points.

Despite the defeat, front-runners Leipzig stay atop the standings whereas Frankfurt jumped to the 9th position in the Bundesliga standings.

Borussia Monchengladbach secured their eighth straight victory on home soil as they came from behind to edge Mainz 3-1.

Hertha Berlin turned the tides as well as they overcame struggling Wolfsburg with two late goals from Jordan Torunarigha and Dodi Lukebakio, and newly promoted Union Berlin returned to winning ways after moving 2-0 past Augsburg.