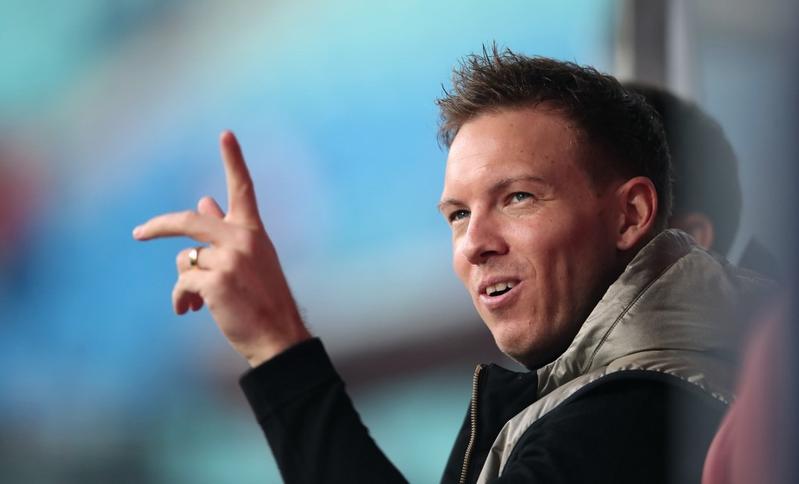 BERLIN - RB Leipzig manager Julian Nagelsmann remains pessimistic about his side's chances to winning the 2020 German title, saying that the club isn't ready to be crowned "when we don't start to beat Bayern or Dortmund."

With the season's second half kicking off in a week's time, Nagelsmann's squad currently leads the table with four points ahead of the ruling champion Bayern Munich, and seven ahead of Dortmund. Still, the record against the countries' most successful clubs remains disappointing.

Out of the 14 games against the so-called big sons, Leipzig had only managed to win 3 of them, with 4 draws and 7 defeats.

Nagelsmann said that the quality of their challengers' squad is much higher, and only an unbreakable team spirit can turn things around

At present, "we are not strong enough" to make it over the finish line, Nagelsmann, 32, commented in his clubs' winter-training camp on home soil. "We need the guts to beat them."

Leipzig are going to meet Bayern in the 21st round on Feb 2, and Dortmund on May 5 on matchday 33.

Many football fans in Germany are hoping for a change in the title winners list as Dortmund and Bayern have won all titles over the past decade (Bayern/8 - Dortmund/2).

Nagelsmann's urgent appeal can be seen as a wake-up call in his attempt to create more confidence. "So far, we have been too silent on the pitch and have acted too cautiously," he said.

Leipzig can't talk about the title when "we don't change that."

Nagelsmann's side may have achieved two draws in the first legs against their most prominent opponents. Still, statistics show an alarming drop in figures when it comes to tackling and ball possession apart from a decreasing number of goal shots.

Nagelsmann said that the quality of their challengers' squad is much higher, and only an unbreakable team spirit can turn things around.

"I can't promise the title to our fans, but I can say we want to end up among the top four," the Leipzig coach said, adding with a wink: "That is including the top spot."

The former TSG Hoffenheim coach has added robustness and stability to the clubs traditional fast-forwarding style. Now, it is time to do further steps to turn lights to green and create one of the biggest surprises in German football.

Leipzig is the national leagues' best away-team and has scored the most goals (48).

READ MORE: Is Leipzig on its way to win the German title?

It has been one of the unwritten laws of German football that the title is battled out in the season's second half earliest in the springtime.

Now may be the time for Leipzig to set a new mark. After all, statistics speak in favor of the East-Germans. The sports magazine "Sport-Bild" rated Leipzig's chances to win the first title in the clubs' history at 68 percent. In 38 of 56 cases, the leading team after the first 17 of 34 games won the title.

Former German national keeper Jens Lehmann is convinced the 2019/2020 season will deliver a happy-end for the parvenu. "That would be a pleasant surprise for the Bundesliga," the 50-year-old said.