By Cheng Yu and Wang Zhuoqiong 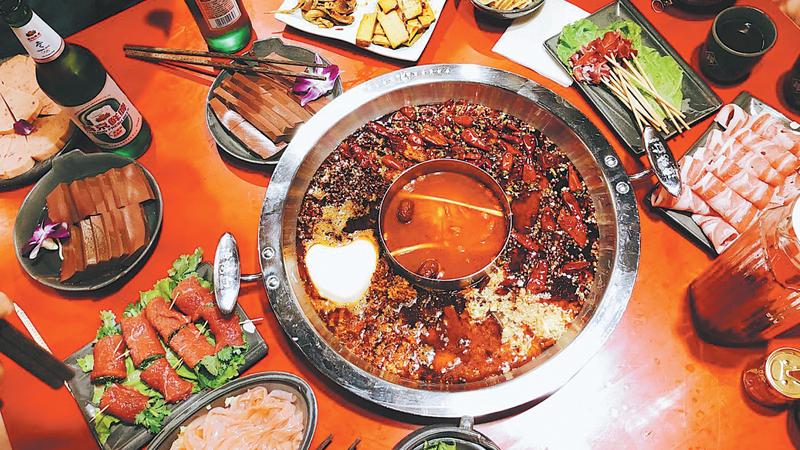 A mouth-numbing spicy broth with 30 different seasonings. Floating isles of "beef oil". Slices of mutton that melt in the mouth.

Your stomach is probably grumbling loudly before having a hotpot. But hold on. Just take a look at the diners in a queue that stretches out of sight down the sidewalk.

Hotpot mania is on.

It has lured dozens of diners to line up for hours at some popular hotpot restaurants both at home and abroad. It has also warmed up the appetites of merchants and investors despite the chill of a frigid winter.

The figures speak for its popularity. The hotpot sector alone swallowed up over 20 percent of the market share in China's catering sector last year, making it the largest niche segment, said the China Hotel Association, which is responsible for serving catering and restaurants in the country.

The hotpot industry exceeded 870 billion yuan (US$125.7 billion) in sales revenue in 2018. The association estimated the market could rocket to around 960 billion yuan by the end of 2019, which is expected to catch up the total valuation of China's iconic distiller Kweichow Moutai Co Ltd.

"As the saying goes, there's nothing to worry about after having a hotpot. If you are still worried, then go for it twice," quipped Yu Jiaqing, a 28-year-old luxury brand marketing staffer from Beijing who has hotpot at least twice a week.

"As the food continues to boil in the broth, we keep drinking and chatting with each other. The atmosphere makes the time warm, too," said Yu. "My friends and I become a bit addicted to this spicy dish, especially in the cold winter."

For most Chinese like Yu, hotpot is usually a social event. A group of people sit around a table to eat, chat, drink some beer and just have a great time for several hours.

A survey by Chenzhi Catering Database showed that 40.2 percent of Chinese usually eat hotpot with friends while 17.6 percent use the occasion for a family reunion.

There were 516,000 hotpot restaurants in the country by the third quarter of 2019, growing rapidly by 11.6 percent year-on-year, China's on-demand service platform Meituan-Dianping estimated. 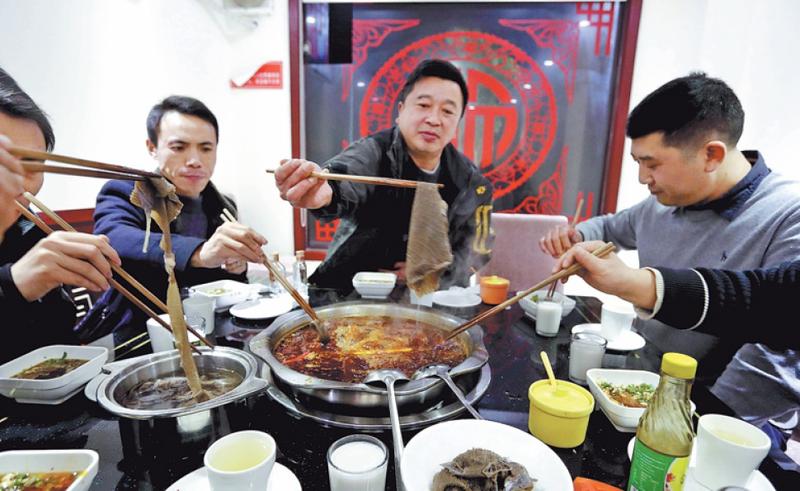 The booming sector has allowed the fortunes of a large group of companies to shine.

Haidilao International Holding Ltd, a Sichuan-style hotpot chain and the undisputed leader of the hotpot industry in China, has put in an outstanding performance that has investors in the stock market in love with the stock as it trades near its 52-week peak.

Haidilao's 2019 interim financial report, which ended June 30 last year, showed that its revenue has grown 59.3 percent from 7.34 billion yuan to 11.7 billion yuan year-on-year. During the half year period of last year, the restaurant chain had an average table turnover rate of 4.8 times per day.

It has made its founder Zhang Yong a billionaire in the Forbes list last year, which is a phenomenal contrast from his early career as a welder in a tractor factory in Jianyang, Sichuan province.

Analysts attributed Haidilao's success to its high-quality service. The hotpot store is famous for customers raving about its good treatment. This ranges from free watermelon if a customer mentions that their food tasted good to getting offered hot ginger tea if they have a touch of the sniffles.

"The success of Haidilao reflects a broader trend that China is riding on the consumption wave where more consumers are paying for high-quality service and experiences," said Dai Jiaxian, an analyst from CITIC Securities.

A Mckinsey report estimated that the upper-middle-income population, defined as having an individual annual income of 106,000 to 229,000 yuan, will account for 54 percent of urban households by 2022.

This group of consumers are more picky in their tastes and loyal to brands. They tend to pay for restaurants that have higher-quality not only in taste but also in services and environment.

The hotpot chain has recently rolled out a new service dubbed" Do not disturb" so customers can enjoy more freedom and privacy during their dining experience.

The move seems to indicate changes where the hotpot chain restaurants are focusing more on their products and services, and not entirely relying on their waiters and waitresses.

The company has likewise added new intelligent elements to its chain, veering from its traditional emphasis on "customer satisfaction" and "employee efforts". 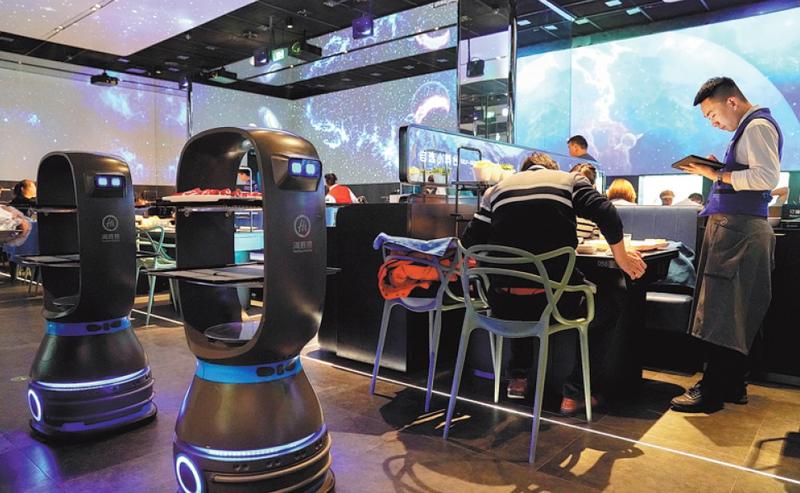 Besides Haidilao, other private companies across China have also made their mark in the niche market, Dai pointed out.

"As the industry matures, consumers will tend to be more rational. Those hotpot restaurants that can accurately position themselves in a specific niche market will continue to benefit."

Xiabuxiabu Catering Management (China) Holdings Co Ltd understands this. The Beijing-based firm offers "one person, one pot" for those who eat alone. This tactic helped it quickly gain a large number of users and saw its share price triple as a result.

"While we continue to gain momentum, we are also developing and launching new products to suit 'trendy' consumers, especially those who are young," said Xiabuxiabu executive president Zhao Yi.

In the first half of 2019, Zhao said the company launched 15 new products at the same time. This included cheese mashed shrimp paste, which proved to be a hit among young customers.

"These new products also reflected our goal to be a trendy company to meet consumers' diversified demand for sustainable growth,"Zhao said.

For hotpot companies, the Chinese market is not their only area for growth.

Companies like Haidilao, Dalongyi Hotpot, Liuyishou and Little Sheep have broken into the international market.

Chengdu, Sichuan province-based Dalongyi is a good example. It has successfully opened eight overseas stores in markets such as Singapore, North America and Australia.

"It is not easy to duplicate the success in the foreign markets, due to material limits and legal restrictions. Also, competition in the hotpot sector is getting fierce as the industry has a high degree of standardization and doesn't rely much on human force," said Lei Xing, vice-president of Dalongyi.

"However, high risks also come with high returns. Compared with the domestic market, the net profit of our overseas stores could reach around 70 percent, outpacing the 50 percent mark seen at home," Lei explained.

The huge enthusiasm for hotpot among Chinese is also prying open the door for the upstream and downstream business, including e-commerce internet firms and condiment makers.

Internal data at a leading hotpot restaurant showed that in its 700 branches, the sales revenue of beer has hit 432 million yuan. To put it into perspective, that can be equal to the annual revenue of a listed beer company on average.

Another bite of the apple would be fresh food startup Miss Fresh. Its official app launched a hotpot column where customers can buy more than 500 hotpot ingredients, including chafing dish, fish, vegetables and tofu. The pitch is for those who want to eat hotpot at home.

The all-in-one online store disclosed to China Daily that the sales revenue of hotpot-related food and ingredients will notch up at least a 50 percent increase by this year's Spring Festival compared with the level seen last year.

Essence Securities senior analyst Liu Wenzheng pointed out that the concentration rate of the Chinese hotpot industry is still developing, which means there are still gaps as far as major industry players are concerned.

"The top five hotpot companies only account for about 5 percent of the industry while fast food restaurants in the United States have exceeded 10 percent," Liu said. The analyst added that hotpot companies also need to pay heed to the dangers of blind expansion along with the critical issue of food safety.