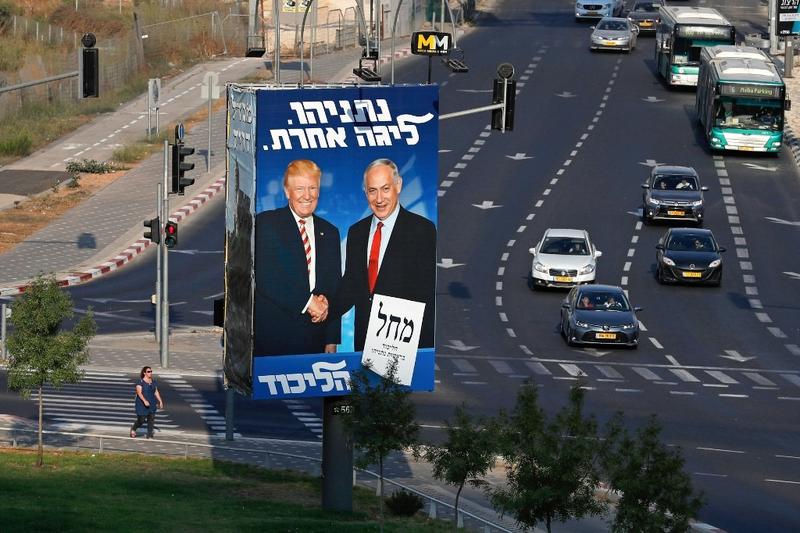 MIAMI/JERUSALEM - US President Donald Trump said on Thursday he will release details of his long-delayed peace plan for the Middle East before Israeli Prime Minister Benjamin Netanyahu and his election rival Benny Gantz visit the White House next week.

Trump said Palestinians might react negatively to his peace plan at first, but that “it’s actually very positive for them”

The political aspects of the peace initiative have been closely guarded. Only the economic proposals have been unveiled.

Trump discussed the timing of the plan’s release with two architects of the plan, senior advisers Jared Kushner and Avi Berkowitz, on Air Force One while returning to Washington from Switzerland on Wednesday.

Speaking to reporters on Air Force One en route to the Miami area for a political event, Trump said Palestinians might react negatively to his plan at first, but that “it’s actually very positive for them.”

ALSO READ: US pushes peace plan in face of Palestinian disdain and doubts

“It’s a great plan,” said Trump, who will meet with Netanyahu at the White House on Tuesday. “It’s a plan that really would work.”

Vice President Mike Pence, on a visit to Jerusalem, extended an invitation to Netanyahu and Gantz to make the visit. It was not immediately clear whether Trump would meet the two leaders separately or together.

The Trump Middle East peace proposal is a document, dozens of pages long, that addresses in detail the thorny political issues between Israel and the Palestinians, such as the status of Jerusalem.

US officials made no mention of inviting the Palestinians, and Nabil Abu Rudeineh, a spokesman for Palestinian President Mahmoud Abbas, said: “We warn Israel and the US administration not to cross any red lines.”

Trump indicated his administration had spoken “briefly” to the Palestinians and would speak to them again “in a period of time.”

Netanyahu said he had accepted the US invitation. His office said he would fly to the United States on Sunday. A Gantz spokesman did not respond when asked whether Gantz had accepted Trump’s invitation.

Netanyahu, a veteran right-wing Israeli leader, faces political and legal troubles at home - he is heading for his third election in less than a year, and was indicted on criminal charges in November. He denies any wrongdoing.

Netanyahu’s principal domestic political rival Gantz, a centrist former general, this week lifted his objection to having the peace plan be published before Israel’s March election. He had previously objected to it as interference in the vote.

The launch of Trump’s plan to end the decades-long conflict between Israel and the Palestinians has been delayed numerous times over the last two years.

A source familiar with the peace team’s thinking said bringing both Netanyahu and Gantz in on the details is aimed at defusing any suggestion that Trump might be favoring one Israeli candidate over another.

Trump is facing his own political clock, preoccupied with his bid for re-election in November, and could ill afford to wait for months for Israel to decide who its next prime minister will be, the source said.

“If we waited we could be in the same position four months from now and never put out the plan,” the source said.

The political proposal is the product of three years of work by Kushner, Berkowitz and former envoy Jason Greenblatt. Kushner proposed a $50 billion economic plan for the Middle East last July at a conference in Bahrain.

Kushner and Berkowitz had been scheduled to visit Israel and Saudi Arabia after attending the World Economic Conference in Davos, Switzerland, this week, but opted instead to discuss the issue with Trump on his flight home, the source said.

Israeli-Palestinian peace talks collapsed in 2014 and Palestinians have called Trump’s proposal dead in the water, even before its publication, citing what they see as his pro-Israel policies

Israeli-Palestinian peace talks collapsed in 2014 and Palestinians have called Trump’s proposal dead in the water, even before its publication, citing what they see as his pro-Israel policies.

The Trump administration has reversed decades of US policy on the conflict, refraining from endorsing the two-state solution - the longtime international formula which envisages a Palestinian state co-existing with Israel.

It has also recognized Jerusalem as Israel’s capital and moved its embassy there. More recently, US Secretary of State Mike Pompeo announced in November that the United States no longer viewed Israel’s settlements on West Bank land as “inconsistent with international law”.

Palestinians and most of the international community view the settlements as illegal under international law. Israel disputes this, citing historical, biblical and political ties to the land, as well as security needs.

Netanyahu announced during an election campaign last September that he intends to annex the Jordan Valley, a large swathe of the Israeli-occupied West Bank.

Israel captured the West Bank in a 1967 war and Palestinians, who signed interim peace deals with Israel in the 1990s, seek to make the area part of a future state.

Abbas’s Palestinian Authority, which exercises limited self-rule in the West Bank, has publicly refused to engage politically with the Trump administration.

They fear the plan will dash their hopes for an independent state in the West Bank, east Jerusalem and the Gaza Strip.

Trump, who will seek a second term in a Nov. 3 election, faces his own problems at home with Democrats seeking to oust the Republican president on impeachment charges of abusing power and obstructing Congress.