The ongoing Hong Kong Biennale of Urbanism\Architecture is largely about coping with the challenges of dense city living. Rebecca Lo investigates. 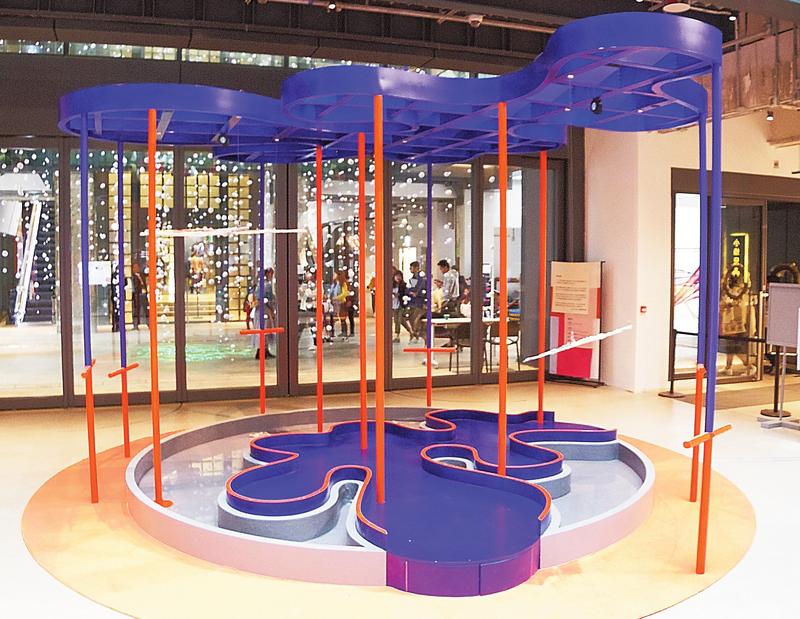 Programming during one of Hong Kong’s most tumultuous periods of social unrest has proved challenging for chief curator Roger Wu and co-curators Alan Cheung and Sarah Mui. However, they gallantly rose to the occasion, coming up with the main theme of 2x2: Imagine to Innovate. Furthermore, they invited more than 60 local and international talents to envision the possibilities for the future of a city — and specifically for Hong Kong — by exhibiting their works at The Mills. Alongside the main theme, the event features three sub-themes related to urbanity: identity, liveability and sustainability.

“The issues covered at the biennale will be relevant to everyone residing in the city, from children to the elderly (and from) industry professionals to government officials,” explains Wu. “Through sharing our professional knowledge, building connections and making interactions, we hope to inspire future city builders to boldly imagine any innovative solutions to some of the city’s current and future issues, making Hong Kong a liveable, sustainable and inclusive society that will continue to develop and evolve.” 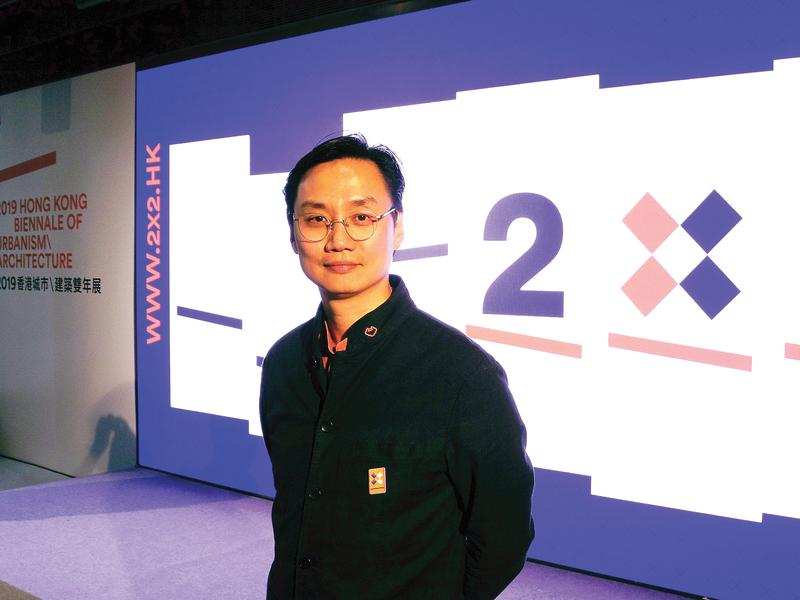 For the show, the team let works pop up organically throughout The Mills’ various spaces, allowing installations to appear as if they were part of the urban environment within the site’s industrial context. For example, The Pulse of Hong Kong — created by Wu, Cheung and Mui — dominates the light-filled space of Shopfloor’s main atrium. An artistic take on a jungle gym, the work greets visitors with a multimedia display that literally allows them to detect their pulses through handlebars fitted with heartbeat sensors.

On the ground floor of The Deck, NEWS-D Limited’s CLOUD provides a thoughtful variation on the traditional chandelier that also acts as a commentary on the digital age through its fluid form. Nearby, a stairwell is utilized for Vertigo ONEIROPHERENIA — The Future Kaleidoscope, a work by QUAD Studio x Dimension Plus that invites viewers to approach it from underneath or from the side in order to see it from completely different perspectives.

Upstairs from ONEIROPHERENIA is Arnold Wong Yok-fai, Keith Chan Chun-yu and Stephen Ip Hay-fung’s Glass-Recycling Tower, an interactive installation set in a high-traffic area near numerous eateries. The noisy crusher encourages passersby to join in and recycle their empty drink bottles, thus engaging the public in a direct and visceral way. 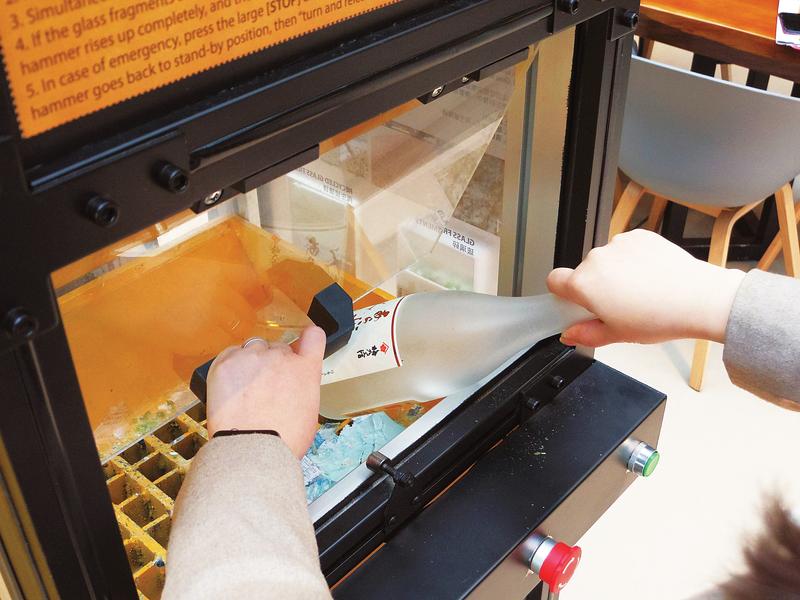 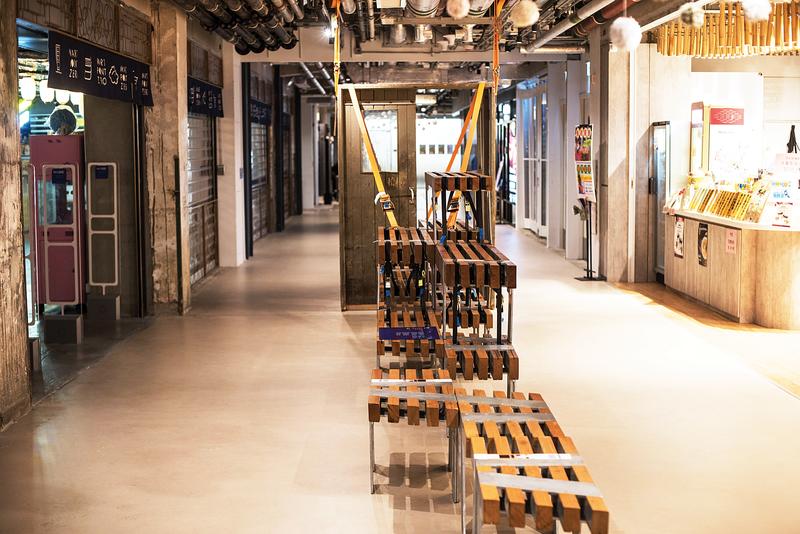 Installations such as Gary Ng Ka-kin’s Living in Between are scattered across the public areas of The  Mills compound. (PHOTO PROVIDED TO CHINA DAILY)

“Give it a try,” says Wu, encouraging a visitor to take one of the many bottles left in an adjacent bin to crush. While the glass was sufficiently demolished, its label remains intact. “We assume that people using the crusher would take care to remove all non-glass items, such as paper labels,” notes a volunteer attendant at the installation.

A stone’s throw away from the tower is Living in Between by Gary Ng Ka-kin, a young Hong Kong architect who took the biennale’s urban density theme to heart. He explored his home city’s ubiquitous gaps — infill spaces —and its equally ubiquitous benches to explore how furniture interrupts density on the street level. Using wood scraps salvaged from a found door on the exhibition site, the installation’s rectilinear forms interacting with an adjacent light installation demonstrate how illumination affects spatial perceptions.

Meanwhile on the ground level of Shopfloor, Beyond Vision Projects’ founder and CEO Rico Chan wants his installation to be accessible to the widest possible audience. Iconic landmarks and cultural elements are given tactile and audio treatment to allow visually impaired visitors to feel, touch and hear the city around them. 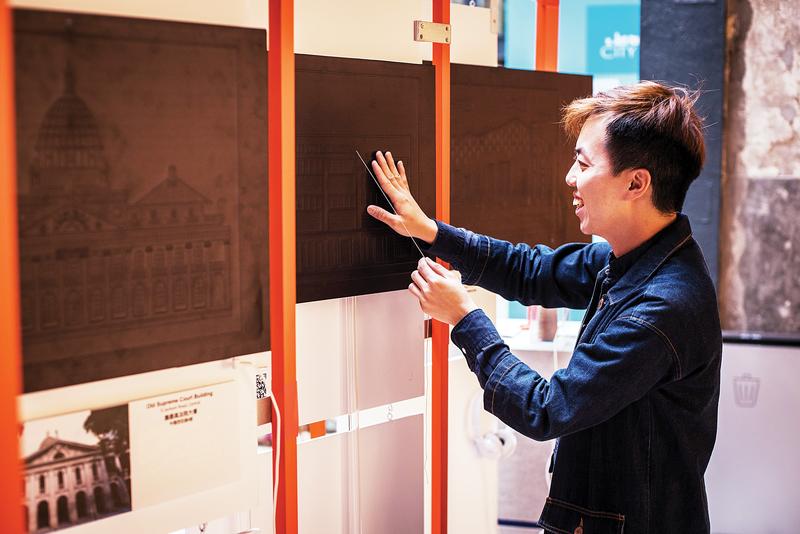 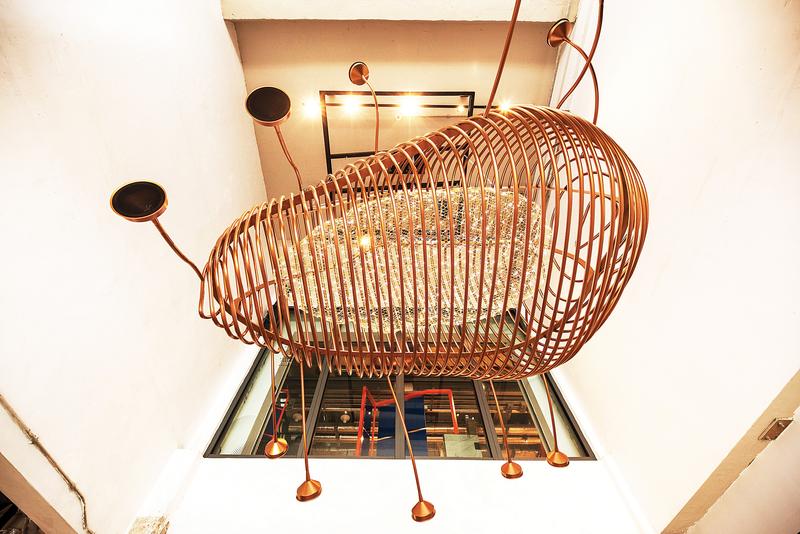 CLOUD by NEWS-D Limited is a striking, somewhat quirky, variation on the traditional chandelier. (PHOTO PROVIDED TO CHINA DAILY)

A number of community-outreach activities, including talks, workshops and guided tours, are being held to continue the conversations generated by the installations. One highlight is Pecha Kucha, a storytelling platform that will run from February 20 to 22, where participating speakers will share their personal takes on the biennale’s sub-themes.

In collaboration with Hong Kong Public Space Initiative, a series of workshops and walks aim to help people explore how public spaces are utilized. Another collaboration is the Hong Kong Architecture Centre’s architect-led Archi-Walks through the Tsuen Wan area, with the aim of highlighting the former industrial district’s distinct urban landscape. Further, ImaginiCITY is a series of events at different participating institutions around town that explore three themes: Old Town x New Face, Harbour x Coastline, and Urban x Rural. 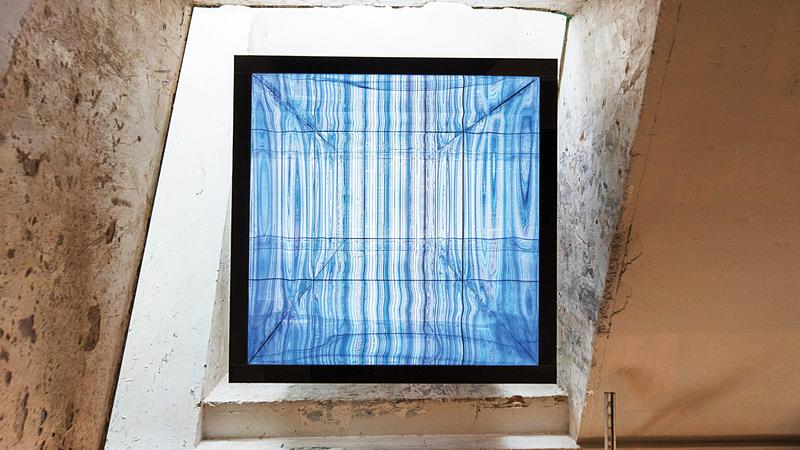 Vertigo ONEIROPHERENIA — The Future Kaleidoscope, an installation by QUAD Studio x Dimension Plus, viewed from the bottom of a stairwell. (PHOTO PROVIDED TO CHINA DAILY)