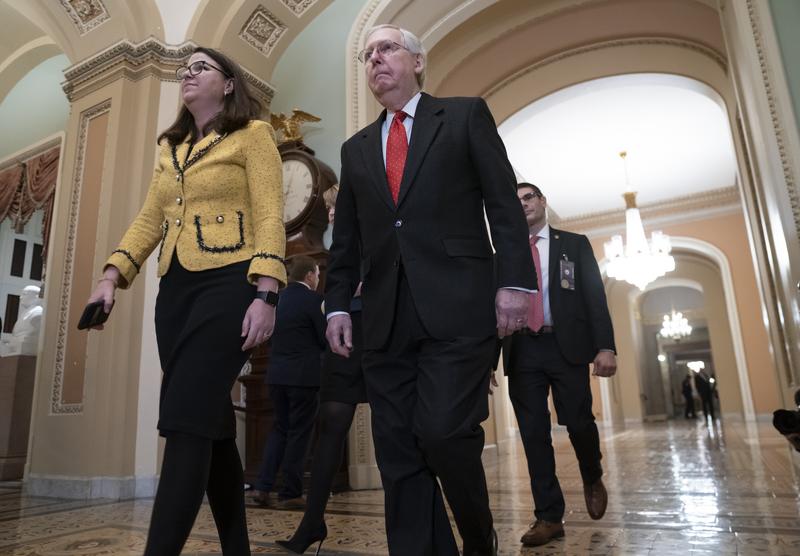 WASHINGTON — The Republican-controlled US Senate voted early on Wednesday on party lines to approve the rules for President Donald Trump’s impeachment trial, rejecting Democratic efforts to obtain evidence and ensure witnesses are heard.

As the third presidential impeachment trial in US history began in earnest, Trump’s chief legal defender argued the Democratic case was a baseless effort to overturn the 2016 election but a top Democratic lawmaker said there was “overwhelming” evidence of wrongdoing.

Trump was impeached last month by the House of Representatives on charges of abuse of power and obstruction of Congress for pressuring Ukraine to investigate former Democratic Vice President Joe Biden, a political rival, and impeding the inquiry into the matter. The president denies any wrongdoing.

After US Chief Justice John Roberts convened the proceedings, the two sides began more than 12 hours of squabbling that lasted into Wednesday morning over Senate Majority Leader Mitch McConnell’s proposed rules for the trial.

Senators voted along party lines, 53-47, to block four separate motions from Democratic leader Chuck Schumer to subpoena records and documents from the White House, the State Department, the Defense Department and the Office of Management and Budget related to Trump’s dealings with Ukraine.

Under McConnell’s hastily revised set of procedures for the trial, there will be 48 hours of opening arguments – 24 hours for each side – over six days, easing off an earlier plan to keep them to two days each. It also allows the House’s record of the probe to be admitted as evidence.

The arguments will begin when the trial resumes at 1 pm on Wednesday.

Republican senators have not ruled out the possibility of further testimony and evidence at some point after opening arguments and 16 hours of senators’ questions, but they held firm with Trump’s lawyers to block Tuesday’s Democratic requests for witnesses and evidence – a potentially good sign for the White House.

White House counsel Pat Cipollone, who is leading Trump’s defense, attacked the foundation of the charges against the Republican president and said Democrats had not come close to meeting the US Constitution’s standard for impeachment.

“The only conclusion will be that the president has done absolutely nothing wrong,” Cipollone said, arguing in favor of McConnell’s proposal to wait until later in the trial to decide whether to allow further witnesses or documents.

“There is absolutely no case,” he said.

After a particularly heated exchange over whether Bolton should testify, Roberts admonished both parties to remember they were addressing the world’s greatest deliberative body. “I do think those addressing the Senate should remember where they are,” he said. 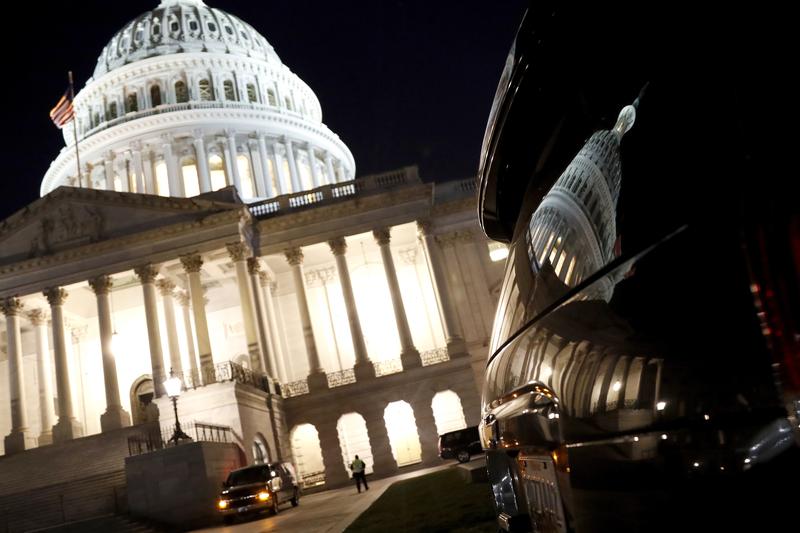 The Capitol building is reflected on the back window of the vehicle in Washington, Jan 21, 2020. (JULIO CORTEZ / AP)

While the evidence against Trump was “already overwhelming,” further witness testimony was necessary to show the full scope of the misconduct by the president and those around him, he said.

Republican senators have not ruled out the possibility of further testimony and evidence at some point after opening arguments and senators’ questions.

But Democrats said they forced repeated votes on evidence and witnesses, which extended late into the night, to get Republicans on the record immediately.

“This may be our only chance, tonight, to make this a fair trial. And it’s just increasingly clear that the White House has no answers for why these documents and these witnesses shouldn’t be produced,” US Senator Chris Murphy of Connecticut told reporters.

Under McConnell’s plan, lawyers for Trump could move early in the proceedings to ask senators to dismiss all charges, according to a senior Republican leadership aide, a motion that would likely fall short of the support needed to succeed.

Even if such a motion fails, Trump is almost certain to be acquitted by the 100-member chamber, where a two-thirds majority is needed to remove him from office.

But the impact of the trial on his re-election bid in November is far from clear.

Democrats accuse Trump of pressuring Ukraine, a vulnerable ally, to interfere in US elections at the expense of American national security and say he is a danger to American democracy.

Trump and his legal team say there was no pressure and that the Democrats’ case is based on hearsay. Cipollone described the Ukraine investigation as an illegal attempt to remove a democratically elected president and avert his re-election.

The White House defense team also repeated some false charges. Cipollone said Republicans were excluded from the secure facility where the initial depositions for the House impeachment hearings took place, when Republican members of the House Intelligence Committee were not only present but questioned witnesses.

Trump lawyer Jay Sekulow said the White House was not allowed to have a lawyer present during the impeachment hearings, when in fact it declined to participate.

The Senate trial is expected to continue six days a week, Monday through Saturday, until at least the end of January.

Televised congressional testimony from a parade of current and former officials who spoke of a coordinated effort to pressure Ukraine to investigate Biden and his son, Hunter, has done little to change support for and against Trump’s impeachment. Reuters/Ipsos polling since the inquiry began shows Democrats and Republicans responding largely along party lines.

No president has ever been removed through impeachment, a mechanism the nation’s founders – worried about a monarch on American soil – devised to oust a president for “treason, bribery or other high crimes and misdemeanors.” One, Richard Nixon, resigned in the face of a looming impeachment.