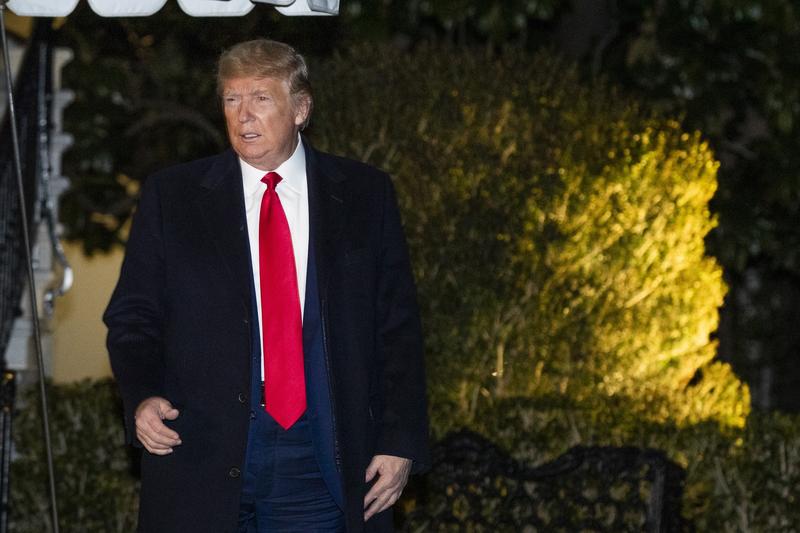 US President Donald Trump glances at journalists as he leaves the White House, Jan 20, 2020, in Washington to attend the annual economic forum in Davos, Switzerland. (MANUEL BALCE CENETA / AP)

WASHINGTON — US President Donald Trump on Monday rejected the Democratic-led House of Representatives’ impeachment charges and called for their immediate dismissal by the Republican-led Senate in a memo offering a legal and political case against his removal.

Democrats say Trump abused his power by withholding US military assistance to Ukraine as part of a pressure campaign and obstructed Congress by refusing to hand over documents and barring administration officials from testifying, even when subpoenaed by House investigators

The 116-page Trial Memorandum sought to undercut charges that the Republican president abused his power and obstructed Congress, and constituted Trump’s first comprehensive defense before his Senate trial begins in earnest on Tuesday.

“The Senate should reject the Articles of Impeachment and acquit the president immediately,” the memo concluded.

Separately, Senate Republican leader Mitch McConnell put forward rules that could lead to a quick impeachment trial for Trump, with no guarantee that witnesses or new evidence would be allowed.

Under the resolution, which could face a vote as early as Tuesday, lawyers for Trump could move early in the proceedings to ask senators to dismiss all charges, a senior Republican leadership aide said, a motion that would likely fail.

Under the Republican proposal, the Senate would have to vote later on whether to even allow materials collected by the House during its impeachment investigation to be admitted as part of the trial.

Trump, only the fourth of 45 American presidents to face the possibility of being ousted by impeachment, is charged with abusing the powers of his office by asking Ukraine to investigate a Democratic political rival, Joe Biden, and obstructing a congressional inquiry into his conduct.

Democrats say Trump abused his power by withholding US military assistance to Ukraine as part of a pressure campaign and obstructed Congress by refusing to hand over documents and barring administration officials from testifying, even when subpoenaed by House investigators.

Trump’s defense argued neither charge constituted a crime or impeachable offense, that he was within his rights as president to make decisions about foreign policy and what information to give Congress, and that the House pursued a flawed and one-sided process before impeaching him on Dec. 18.

The memo’s executive summary asserted that the House Democrats’ “novel theory of ‘abuse of power’” was not an impeachable offense and supplanted the US Constitution’s standard of “Treason, Bribery, or other high Crimes and Misdemeanors.”

It rejected the obstruction of Congress charge as “frivolous and dangerous,” saying the president exercised his legal rights by resisting congressional demands for information, also known as subpoenas.

It also accused the House Democrats of conducting a rigged process, said they succeeded in proving only that Trump had done nothing wrong and argued, as the White House has repeatedly, that this was an effort to overturn Trump’s 2016 election victory and to prevent his re-election in November.

While the Senate is highly unlikely to remove Trump from office, it is important for him to try to diminish the Democratic accusations to limit political damage to his bid for a second term. 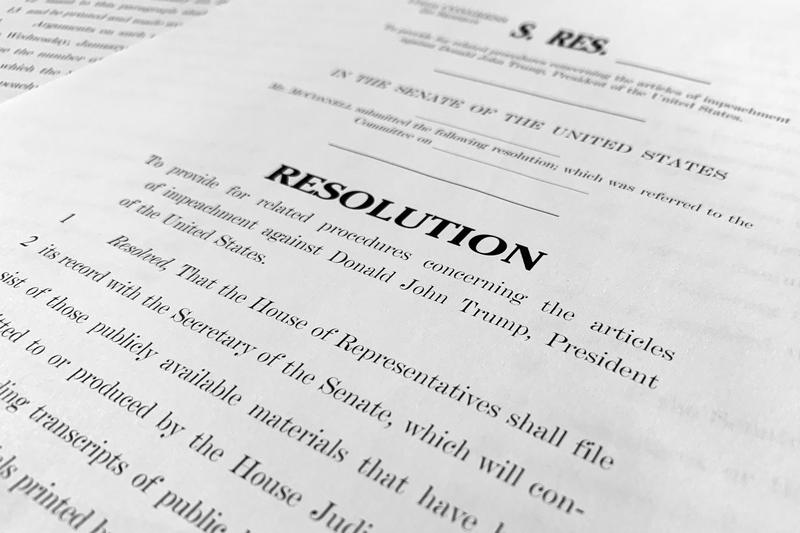 A copy of a US Senate draft resolution to be offered by Senate Majority Leader Mitch McConnell, R-Ky, regarding the procedures during the impeachment trial of US President Donald Trump in the US Senate is photographed in Washington, Jan 20, 2020. (JON ELSWICK / AP)

In part of his legal filing, Trump’s lawyers cast their arguments in unabashedly political terms.

“They want to use impeachment to interfere in the 2020 election,” the memo said. “Put simply, Democrats have no response to the President’s record of achievement in restoring prosperity to the American economy, rebuilding America’s military, and confronting America’s adversaries abroad.”

In their own filing with the Senate on Monday, the seven House impeachment “managers” who will make the Democrats case for Trump’s removal to the Senate said he had “jeopardized our national security and our democratic self-governance.”

“President Trump maintains that the Senate cannot remove him even if the House proves every claim in the Articles of impeachment. That is a chilling assertion. It is also dead wrong,” they wrote, arguing that despite Trump’s “stonewalling,” the House had amassed “overwhelming evidence of his guilt.”

Trump’s team says he was well within his constitutional authority to press Ukraine President Volodymyr Zelenskiy last year to investigate Biden and his son Hunter as part of what Trump says was an anti-corruption drive. The Bidens deny any wrongdoing and Trump’s allegations have been widely debunked.

While Trump’s legal papers laid out extensive arguments as to why he did not commit a crime, the General Accounting Office, the watchdog arm of Congress, said last week that Trump did commit a crime by withholding US military assistance to Ukraine, money that was ultimately sent after a brief pause.

Seeking to show he is still conducting presidential business despite the trial, Trump left late on Monday for Davos, Switzerland, to join global leaders at the World Economic Forum. Some advisers argued against his making the trip, where he will meet Iraqi, Pakistani, Swiss, Kurdish and European Union leaders.

As a result, he will be in the Alps when the Senate on Tuesday engages in a potentially bruising battle over whether witnesses should be allowed to testify in the trial and whether new documents could be introduced, as Democrats wish.

The resolution McConnell unveiled on Monday would give House Democratic prosecutors and Trump lawyers 48 hours, evenly split, to present their arguments over a maximum of four days.

It drew immediate criticism from Senate Democratic Minority Leader Chuck Schumer, who accused McConnell of failing to stick to the rules used during President Bill Clinton’s 1998 impeachment, calling it “nothing short of a national disgrace.”

“It’s clear Senator McConnell is hell-bent on making it much more difficult to get witnesses and documents and intent on rushing the trial through,” Schumer said in a statement.

While there could be a fast-track trial, Democrats could slow things down by proposing that a series of witnesses testify. If senators vote to subpoena witnesses, that also would consume time by requiring that the witnesses first be deposed before deciding on whether they actually testify to the Senate.

No president has ever been removed as a direct result of impeachment. One, Richard Nixon, resigned before he could be removed. Andrew Johnson and Clinton were impeached by the House but not convicted by the Senate.