China reveals plan to cut plastic use by 2025 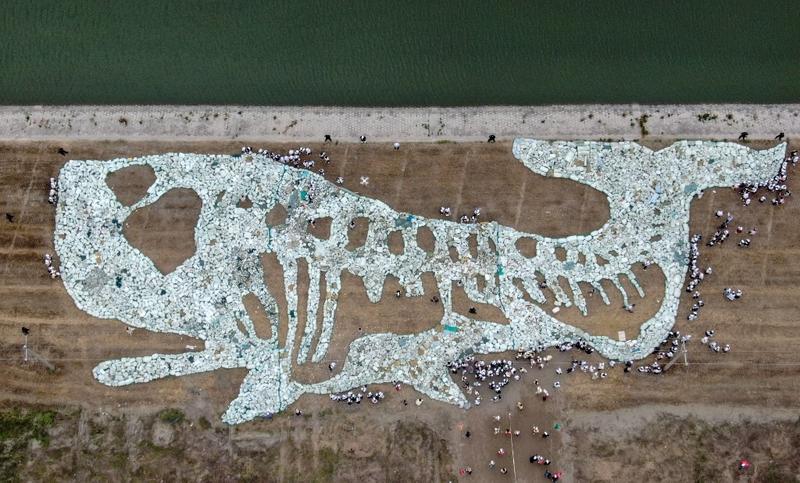 This aerial photo taken on June 10, 2019 shows a 68-metre long image of a whale formed by plastic waste collected from the ocean during an event to raise awareness on ocean conservation at Rudong Yangkou Harbour in Nantong in China's eastern Jiangsu province. (PHOTO / AFP)

BEIJING - China on Sunday released an ambitious plan to ban or significantly reduce the production and use of environmentally-unfriendly plastic products in the next five years to contain pollution.

The country will gradually ban or restrict the production, sales and use of certain plastics while promoting their degradable, recycle-friendly alternatives, according to a document issued by the National Development and Reform Commission (NDRC) and the Ministry of Ecology and Environment

By the end of 2025, the use of non-degradable single-use plastic tableware for take-out in cities should be cut by 30% according to a document
issued by the National Development and Reform Commission (NDRC) and the Ministry of Ecology and Environment

By 2025, China expects to effectively control plastic pollution, substantially reduce the amount of plastic waste in landfills of key cities, establish a complete plastics management system and make progress in the development of alternative products, according to the document.

The document has set step-by-step timelines for the next five years to reduce the use of single-use, non-degradable plastics and parcel packaging.

By the end of 2025, the use of non-degradable single-use plastic tableware for take-out in cities should be cut by 30 percent, according to the document.

In the meantime, China will encourage the use of alternative materials such as non-plastic products and degradable shopping bags and urge efforts in the recycling and disposal of plastic wastes, according to the document.

Meng Wei, a spokesperson for the NDRC, said at a press conference that Chinese authorities will increase support from policymaking and scientific research while strengthening supervision and law enforcement in this regard.

Major issues in plastic pollution control will be overseen by the central environment inspectors to improve assessment and accountability practices, said Meng.