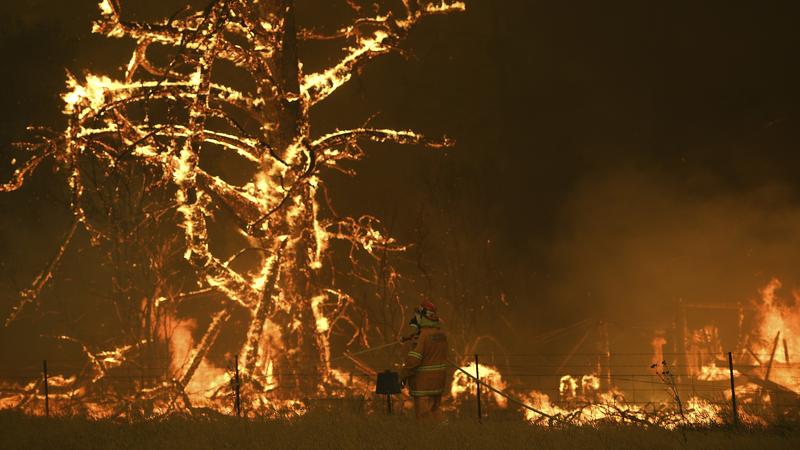 MELBOURNE — Public support for Prime Minister Scott Morrison has slumped to its lowest levels amid widespread anger over his government’s handling of Australia’s bushfire crisis, according to a survey released by Newspoll on Monday.

At least 28 people have been killed in the fires that have destroyed 2,000 homes, and razed 11.2 million hectares, nearly half the area of the United Kingdom

Morrison has come under attack for being slow to respond to the crisis, even taking a family holiday to Hawaii while fires were burning. He acknowledged during a television interview on Sunday that he had made some mistakes.

“We have heard the message loud and clear from the Australian people,” Treasurer Josh Frydenberg said on Monday, when asked about the poll result as he announced a A$50 million (US$34.56 million) wildlife protection fund.

ALSO READ: ‘Moment of truth’ lit up by bushfires

“They want to see a Federal Government adopt a very direct response to these natural and national disasters,” Frydenberg said.

It is Morrison’s worst showing in the poll since he took over leadership of the ruling Liberal Party in August 2018 when a backbench uprising ousted former prime minister Malcolm Turnbull.

No margin of error was provided for the poll, which surveyed 1,505 people from Wednesday to Saturday, although it was about 2.5% points in previous Newspolls.

The poll was taken after Morrison announced a A$2 billion bushfire recovery fund and called out 3,000 army reservists to back up state emergency workers - responses that were viewed as belated.

Morrison said on Sunday he would take a proposal to Cabinet to hold a Royal Commission national inquiry into the bushfires, including examining the response to the crisis, the role and powers of the federal government and the impact of climate change.

After weeks of raging fires whipped up by erratic winds and temperatures over 40 degrees Celsius, conditions eased over the weekend with showers forecast for New South Wales (NSW), the worst hit state, over the next few days.

“If this BOM (Bureau of Meteorology) rainfall forecast comes to fruition then this will be all of our Christmas, birthday, engagement, anniversary, wedding and graduation presents rolled into one. Fingers crossed,” the NSW Rural Fire Service said on Twitter.

Here are key events in the crisis:

-Australia’s pristine ‘AAA’ sovereign rating is not at “immediate risk” from the fiscal and economic impact of bushfires raging across the country’s east coast, S&P said on Monday.

-The Australian government committed A$50 million to an emergency wildlife recovery program on Monday, calling the bushfires crisis engulfing the country “an ecological disaster” that threatens several species, including koalas and rock wallabies.

-German engineering giant Siemens said it would fulfill its contract to provide signaling for a rail line to a controversial new coal mine being built by India’s Adani Group in Australia’s outback, drawing criticism from green groups on Monday.

-Frydenberg announced A$50 million in funding on Monday for protecting wildlife and restoring damaged habitat, with a focus on threatened species, like koalas, with heartbreaking images of rescues of burned animals having gone viral around the world.

-Since October, thousands of Australians have been subjected to repeat evacuations as huge and unpredictable fires scorched more than 11.2 million hectares, an area nearly half the size of the United Kingdom.

-Across New South Wales, 111 fires were still burning late on Sunday, 40 of them not yet contained, but none at emergency level.

-A number of fires burning in the Snowy Mountains region in New South Wales and into Victoria have merged across more than 600,000 hectares of land. They do not pose a threat, authorities say, despite being in an area hard to reach.

-The government said on Sunday it would provide A$76 million (US$52 million) for mental health counseling and healthcare consultations to firefighters, emergency workers, individuals and communities.

-Western Australia Department of Fire and Emergency Services said on Sunday an out-of-control and unpredictable fire that is moving slowly in the state’s south, poses a possible threat to lives and homes in the area.

-South Australia said on Sunday that more than 32,000 livestock animals, mostly sheep, had died in recent fires on Kangaroo Island, while fire services are working to strengthen containment lines ahead of expected worsening weather conditions on Monday.

-Thousands of Australians took to the streets on Friday to protest against government inaction on climate change, and were supported by protesters in London.

-Australia’s wildfires have dwarfed other recent catastrophic blazes, with its burnt terrain more than twice the extent of that ravaged by 2019 fires in Brazil, California and Indonesia combined.

-Westpac estimated total bushfire losses to date at about A$5 billion, higher than the 2009 bushfires in Victoria but smaller than the Queensland floods in 2010/11. It forecast a hit of 0.2% to 0.5% on gross domestic product.

-The Insurance Council of Australia increased to more than A$900 million its estimate of damage claims from the fires, and they are expected to jump further.

-About 100 firefighters from the United States and Canada are helping, with 140 more expected in coming weeks.

-Smoke has drifted across the Pacific, affecting cities in South America, and may have reached the Antarctic, the United Nations’ World Meteorological Organization said.