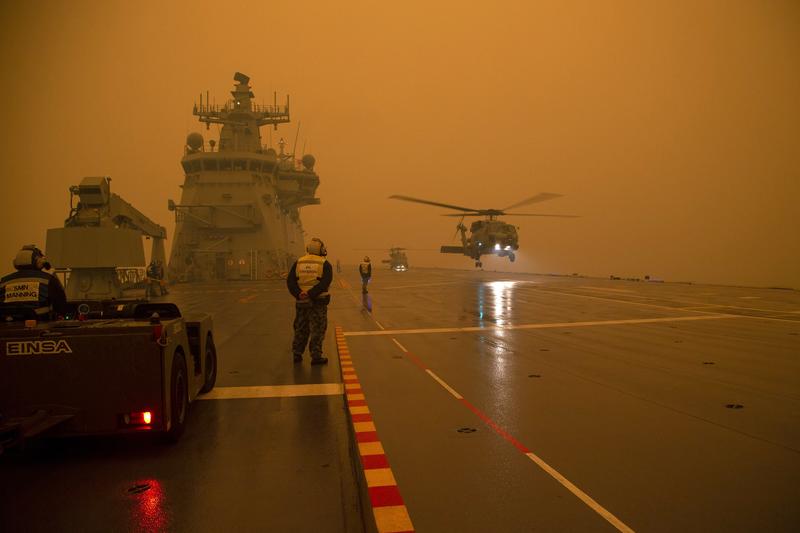 In this photo provided by the Australian Department of Defence, a Royal Australian Navy Seahawk Helicopter departs from HMAS Adelaide while at sea off Australia's east coast, Jan 5, 2020, during operations to assist in battling wildfires. The wildfires have so far scorched an area twice the size of the US state of Maryland. (ABLE SEAMAN THOMAS SAWTELL / ADF VIA AP)

Australian firefighters used a break from searing temperatures to strengthen containment lines around huge wildfires burning in the country’s southeast on Tuesday, as the financial and environmental costs of the crisis mounted.

The latest official data showed that more than 10.3 million hectares of land across the continent - an area the size of South Korea - has been razed by bushfires in recent weeks

More than 10.3 million hectares of land an area the size of South Korea - have been razed by bushfires across the country in recent weeks, according to the latest data, with the southeast particularly hard hit.

Imagery posted online from the Himawari 8 Japanese satellite and NASA’s Earth Observatory showed plumes of smoke from the fires reaching as far as South America.

Firefighters on the ground were making the most of a few days of cooler temperatures in the southeast of the country to prepare for a forecast return of heat and wind later this week that is expected to spur existing blazes and spark new ones into life.

“We talk about benign conditions, and the fire is suppressed but it is still there. It is still tinder dry.”

Australia’s bushfire season started earlier than normal this year following a three-year drought that has left much of the country’s bushland vulnerable to fires.

Thousands of people have been left homeless, while many in rural towns have spent days without electricity, telecommunications and, in some cases, drinking water. Military-coordinated rescue and support efforts were ongoing.

Prime Minister Scott Morrison, who was due to meet with banking chiefs on Tuesday, has acknowledged the crisis will have a significant economic impact and on Monday pledged A$2 billion (US$1.39 billion) to a newly created National Bushfire Recovery Agency.

The Insurance Council of Australia increased its estimate for damages claims from the fires to more than A$700 million on Tuesday, with claims expected to jump further when more fire-hit areas are accessible. 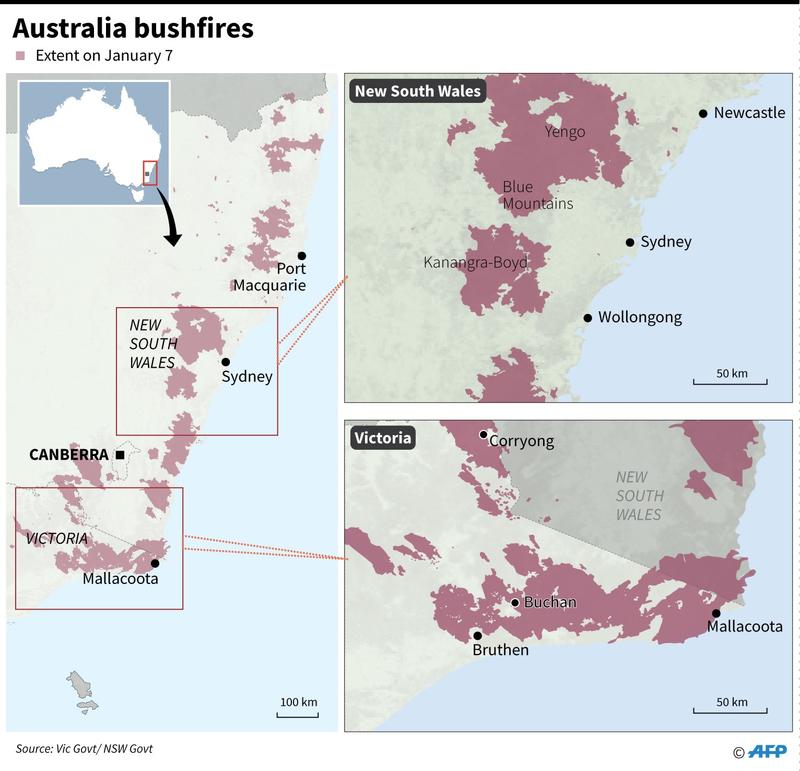 Following are some highlights of what is happening in the Australian bushfires crisis:

* Forty-eight US firefighters are scheduled to arrive in Australia on Wednesday, officials said, joining 39 of their compatriots already on the ground. A further 18 incident management personnel from the US and Canada will also arrive on Wednesday.

* Morrison attended the funeral for volunteer firefighter Andrew O’Dwyer. who was killed along with colleague Geoffrey Keaton on Dec 19 after a burnt tree fell in the path of their firetruck, causing it to roll.

* Data released on Tuesday showed the fires were beginning to have an effect on the economy. The ANZ gauge of consumer confidence fell last week to its lowest level in more than four years, while its job advertisement data recorded the biggest monthly drop in seven months in December.

* The military was deployed to help bury an estimated 4,000 dead sheep and cattle.

* Authorities said the number of people calling for urgent medical care in Victoria jumped 51% on Monday as hazardous smoke covered the state.

* There were 132 fires ablaze across New South Wales state, but all were back at the “advice” level, the lowest alert rating.

* Insurers have received 8,985 bushfire-related claims in NSW, Victoria, South Australia and Queensland since the Insurance Council declared a bushfire catastrophe on Nov 8. The claims are estimated to have a loss value of A$700 million. The council recorded the destruction of 1,838 residential properties.

* A member of parliament from Morrison’s party was criticized for an appearance on the “Good Morning Britain” ITV program during which he said there was no link between climate change and the bushfire crisis. “There is no link, the facts that cause the fires are the drought and the drying of the environment,” lawmaker Craig Kelly said.