Editor’s note: Beeple (aka Mike Winkelmann) is the maker of the third most expensive piece by a living artist. An NFT of Everydays: The First 5000 Days — a collage of 5,000 digital images by the artist, produced at the rate of one a day — made history when it sold for $69.3 million in March 2021. 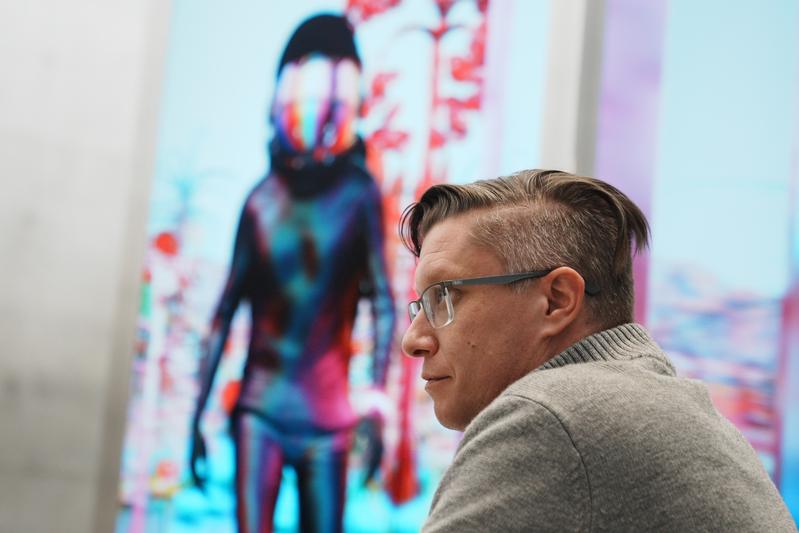 In an exclusive interview with China Daily, the artist shares thoughts on his practice, inspirations, role in society and why, despite the current state of the crypto market, NFTs are here to stay.

Given that HUMAN ONE is a dynamic piece, would you like to walk us through the stages of its evolution since you made it?

What is going to continue to change in the piece is the environment the person is walking through. When the piece was sold in November last year, the environment was like a desert with rocks, and there was also a bunch of art historical references. And then, for the show at the Castello di Rivoli (museum in Italy), it was changed to images of a person walking through a dystopian ruined city with Ukrainian flags. It was more about the Ukraine war.

And again, the environment is now completely changed for this show. It’s basically a kinetic video sculpture. I’ve used this format to say various things over a long period of time. The Ukraine thing wasn’t part of the work initially, as Ukraine hadn’t happened then. So it’s not like I have things planned out for the next 30 years. It’s very much a journey for me as well. And I don’t know where it’s going.

I wanted to make the M+ version very different from the last edition, which was dark and somber. This one is more like the figure is exploring new lands. For its first showing in Asia, I wanted it to reflect this new, vibrant place.

Why are you calling it the first human born in the metaverse?

I wanted to make it an androgynous figure, like an explorer in a new land.

It’s not literally the first one. I’m imagining that this is the story of the first human in the metaverse in the sense that they don’t have a physical body. This is their entire existence. 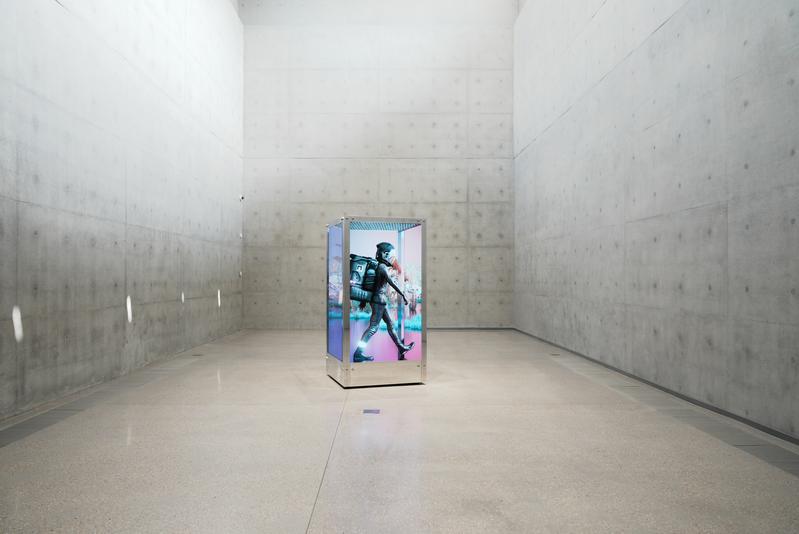 HUMAN ONE is a kinetic four-channel video sculpture showing a life-size, androgynous explorer on a continuous trek inside a seven-foot-tall box. (JANICE JIANG / CHINA DAILY)

HUMAN ONE is a digital sculpture that exists in physical space. Is this meant to be a reflection of our hybrid existence, straddling the physical and virtual worlds?

I see it as a way of bringing digital art into the real world. This is a lot more impactful than looking at it on our phone screens. I think it’s important that people have an emotional connection with art, and there’s a lot of room to explore when it’s a cross between digital and physical. I think the gray area between the digital and physical will diminish over time.

Can you reveal anything about the changes viewers will see in the piece until the M+ exhibition ends on April 30?

The piece will change for Art Basel Hong Kong. I don’t actually know how it’s going to change, and that for me is the really exciting part. I have some ideas, but if something happens between now and then, who knows?

Would you consider making changes to the work based on audience feedback?

That’s an interesting idea. I’ve never thought about people voting on how it could change.

Because the work is continuously changing, people can influence it. For instance, there is a sticker on the figure’s backpack that says “Castello di Rivoli”. And that was an idea from Ryan (Zurrer), the piece’s collector. He said, “Why not add stickers to the backpack to show all the museums the piece has been at?” So if somebody (gives me) a good idea, I’ll definitely take it.

I think this piece is very different from any other painting or sculpture in this museum. They are done and not going to change. They may have a different meaning in the future but that was not necessarily intended by the artist, whereas this is an unfinished work. For me, that’s the true potential of digital art: that it has the ability to change.

What’s the source of the images used in HUMAN ONE?

The images you see here were made using Cinema 4D — the same software that I use to make the Everydays series. 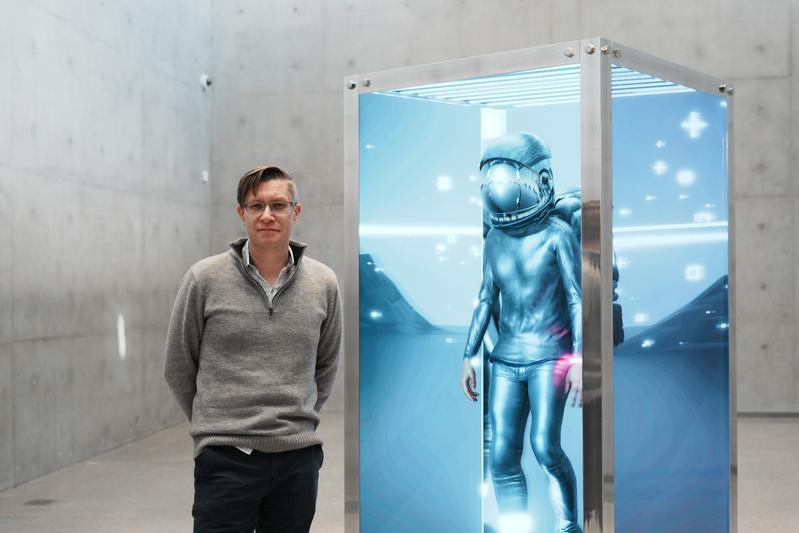 During the exhibition, Beeple will be altering HUMAN ONE’s virtual landscape remotely in response to the changing times. (JANICE JIANG / CHINA DAILY)

You launched the Everydays series in 2007. How has your art evolved over the last 5,700 days of producing and publishing an image a day? Which aspects of these changes are you most pleased about?

I’d like to think I’ve gotten a little better since then. It’s been very much a learning journey. I started doing the first Everydays sketches after seeing UK illustrator Tom Judd doing it. I wanted to get into that ritual. After a year I saw that I got a lot better at drawing.

Then I thought: Why not switch to 3D program from 2D? Later, I moved on to using Render Network and 3D rendering. I feel that there is a massive amount of room for improvement in the work that I do, conceptually and technically.

In the beginning, Everydays was all drawings. And then they became rudimentary 3D things. The work was very abstract for a long time. Now it is quite narrative, often times about current things, sometimes things that happened on the day.

I see a lot of political satire in your most recent series of works, often mocking American presidents, past and present, and also powerful people like Jeff Bezos and Elon Musk…

If you look back at some of my first drawings, there are actually a bunch of political and current event things.

Right now I read a lot of news. This is my office (shows a photo on his phone of a wall with six TV screens). They are all set to news, always on mute and running 24-7. I’m very much influenced by the things that are going on. For me it’s exciting to be able to use these digital tools that have got so powerful now that we can make images (in a day) that would have taken two months to paint.

So the point of making these images is about being a part of this dialogue and also distributing it instantly, all over the world. It’s a new opportunity.

You’re a chronicler of our times, responding to current events every single day, almost like an automated system…

I think it’s really cool to be able to look back and say things like, “Oh, Trump got kicked out on this day.” I can point to moments in time in corresponding pictures.

Do you see being a satirist and responding to the moments we’re living through as part of your vocation as an artist?

I won’t say it’s necessarily a part of an artist’s vocation. Other artists focus on other aspects of life and art. For me, it’s about what’s coming out at the moment. I put out so much work that I get very bored doing the same thing over and over. So who knows, I might move to doing more abstract works again. But then again, maybe I won’t.

I don’t know how artists can have a very tiny aesthetic framework and work within it for decades. 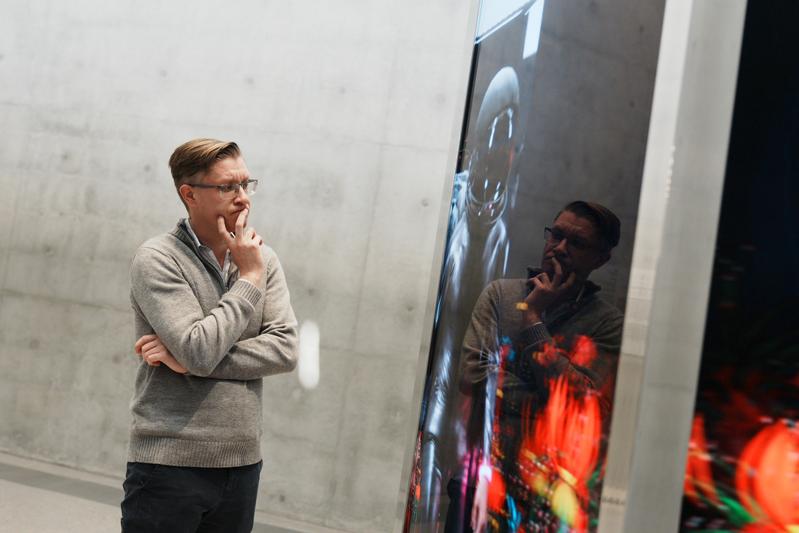 What’s the idea behind opening up a part of your archive (Cinema 4D project files) for free use?

There are a couple of different pieces that I made available for people to use however they want. There is a bunch of files that are free to download. I’m wondering if it might be cool to upload the project files for HUMAN ONE and let that be a part of the piece. That could be interesting.

Besides that, there is also a bunch of Creative Commons VJ loops that have been downloaded and used all over the world.

It’s an open-source sort of idea — that you make something and give it away for free. Those project files don’t do any good sitting on my hard drive. There’s massive benefit to me and others in just giving them away. I’m surprised that more people don’t do that.

Once you render out a video from project files, they’re useless anyway. I benefited massively from other people making their stuff open source, whether it was software or free tutorials. Pretty much everything I know about making 3D works like HUMAN ONE is from watching tutorials other people gave away or recorded for free. Giving away these project files is the least I can do to give back to the digital art community.

What does the current cryptocurrency market implosion mean for the future of NFT art?

I think a bit of a correction was inevitable. And crypto isn’t an isolated case. The entire circular economy is not doing super-great right now. Things go up and down.

How do you see the future of NFT art in, say, five years from now? Do you think the market will have rationalized by then?

I think it will have stabilized, but then, who the hell knows?

Does the current downturn in the market affect you as an artist?

No, it doesn’t. If this entire thing went to zero, I’d still be making it, because I was making it for zero, 20 years before this.

What happens when collectors start losing interest? Can NFT art have another lease of life, in a different realm?

I think NFT art has reached enough mass… no part of me is concerned that everybody’s just going to walk away. I think NFT has irreversibly changed people’s ideas of what art is. In terms of the market going up and down, it will be what it is. Eventually people will see NFT art like any other form of art — like sculpture, street art and photography — and it will be bought and sold in the regular market.

That has changed. Ethereum’s transition to a consensus mechanism called Proof-of-stake, which uses far less power, is expected to drastically reduce energy usage and (the token’s) carbon footprint by 99.99 percent. Bitcoin is still using a bunch of power; Ethereum is not.

That’s awesome. More power to proof-of-stake users like you — no pun intended. On another note, why Beeple? What’s the story behind the moniker?

It’s actually a soft toy (a hairy Ewok) from the ’80s that you can still get on eBay. I started using the name in 2003. The work I was doing back then focused on the interplay between light and audiovisuals. This toy covered its eyes and beeped when exposed to light sensors. It seemed a good fit.

This interview has been edited for length and clarity.