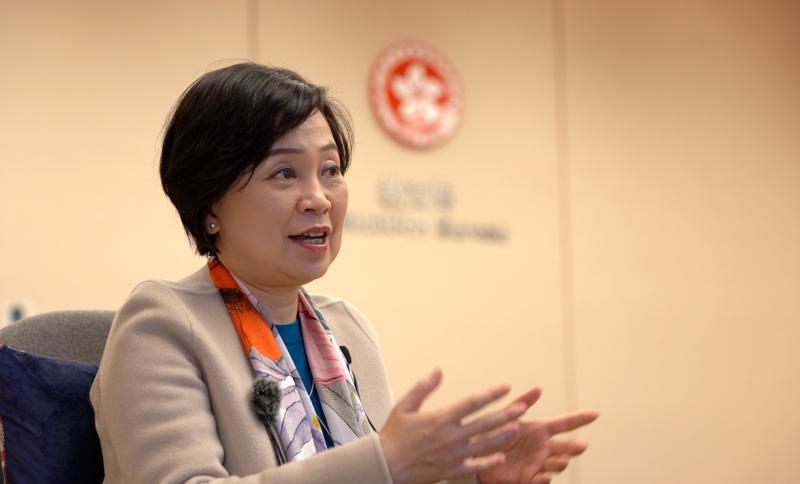 Hong Kong’s education chief has her eyes on deepening and widening collaboration with the Chinese mainland, to serve local youngsters’ increasing desire to feel the pulse of the nation and help them align their personal goals with the nation’s vision.

The initiatives in the pipeline include making it a must for new teachers to join mainland exchange tours, expanding cross-border inter-school cooperation, and setting up the city’s first school offering mainland courses, Secretary for Education Christine Choi Yuk-lin told China Daily in an exclusive interview.

Citing President Xi Jinping’s report to the 20th National Congress of the Communist Party of China, Choi said young people today are living in a remarkable time. With the nation’s rapid development, the Guangdong-Hong Kong-Macao Greater Bay Area development blueprint and the Belt and Road Initiative, she believes Hong Kong young people have a big role to play in the great rejuvenation of the Chinese nation and called on them to firmly seize the opportunities.

“The entire development blueprint is right there. Our young people should aim higher and set their goals in accordance with the whole country’s development prospects,” she said.

As of January 2022, the number of Hong Kong students studying in mainland universities for bachelor and postgraduate degrees had reached 18,430, an increase of 11.3 percent over the previous year

With deeper understanding of the nation, the number of students applying to study on the Chinese mainland has surged in recent years, Choi said. As of January 2022, the number of Hong Kong students studying in mainland universities for bachelor and postgraduate degrees had reached 18,430, an increase of 11.3 percent over the previous year.

Choi said many mainland institutions offer courses not available in Hong Kong, such as marine technology, aerospace technology, and heavy industry, which are all quite popular with Hong Kong students.

A greater number of mainland people also came to Hong Kong for study, work or investment purposes. In recent years, the mainland has become Hong Kong’s greatest source of direct external investment. Out of all the companies from outside Hong Kong, mainland companies have set up the greatest number of regional headquarters and local offices in the city; this in turn has brought a lot of talent from the mainland to work in the city, who may opt to send their children to a school in Hong Kong offering the mainland curriculum during their temporary stay.

It was for this purpose that the Education Bureau offered in 2021 to build the city’s first school providing the mainland curriculum in Tin Shui Wai.

Choi revealed that the bureau will announce which group will run the school at the end of this year. After that, construction of the school will begin, which is expected to take three years.

To enable local teachers to gain first-hand experience of the nation’s latest developments, newly-recruited teachers and teachers aspiring for promotion in public sector schools will be required to participate in short-term study tours in the mainland.

According to Choi, the exchange tours will last three to four days, with mainland cities in the GBA as primary locations. In addition to attending lectures and forums, teachers will also have the chance to visit mainland companies to learn about the country’s technological and industrial development.

Serving teachers can go on exchange tours for longer periods, usually for two weeks. These will be based on certain themes, such as history and culture, with activities like visiting the Dunhuang caves in Gansu province or the ancient city walls in Beijing.

As for student exchanges, the Education Bureau will also strengthen support for local students to study, do internships, and work in the mainland. It pledged to provide 50 percent of local undergraduate students from University Grants Committee‑funded universities with opportunities to learn outside Hong Kong by the 2025/26 academic year

As for student exchanges, the bureau will also strengthen support for local students to study, do internships, and work in the mainland. It pledged to provide 50 percent of local undergraduate students from University Grants Committee‑funded universities with opportunities to learn outside Hong Kong by the 2025/26 academic year.

To widen the collaboration with mainland schools, the bureau will increase the number of local schools participating in the Sister School Scheme by 10 percent within 2023.

The scheme serves as a platform to facilitate education exchange between Hong Kong and mainland schools. By October this year, about 780 publicly‑funded primary and secondary schools in Hong Kong had established over 2,100 sister school pairings with their mainland counterparts.

Despite the pandemic, numerous online activities were conducted under the scheme, such as student debate competitions, musical shows, and recitation performances. More activities will be launched when the free flow of cross-border travel resumes, Choi said.

In addition to boosting cooperation with the mainland, the government will spare no efforts in solving other problems that have recently emerged in Hong Kong’s education system, such as the declining number of students due to the low fertility rate and the ongoing loss of teaching staff due to various reasons, Choi said.

To cope with the decline in student numbers, the bureau decided to halt the operation of schools that have low enrolment rates, or to combine them with other schools. It also plans to relocate schools from less populated areas to districts with greater education needs.

From the 2021/22 school year, Canton Road Government Primary School, a 60-year-old school located in Tsim Sha Tsui, stopped enrolling new students and will move to Anderson Road on the eastern border of the New Territories and New Kowloon.

Also, the government has stepped up efforts to retain teachers, with incentives including higher salaries, more opportunities for promotion, and fewer work burdens.

Over the next five years, Choi said the Education Bureau aims to build a great teaching team, strengthen the cultivation of scientific and research talents, provide more possibilities for young people to grow and succeed, and focus on the fostering of national education. “Education can always be better. We will make every effort to shore up our unique educational strengths and rise to the challenges ahead.”