Volunteers rise to the green challenge 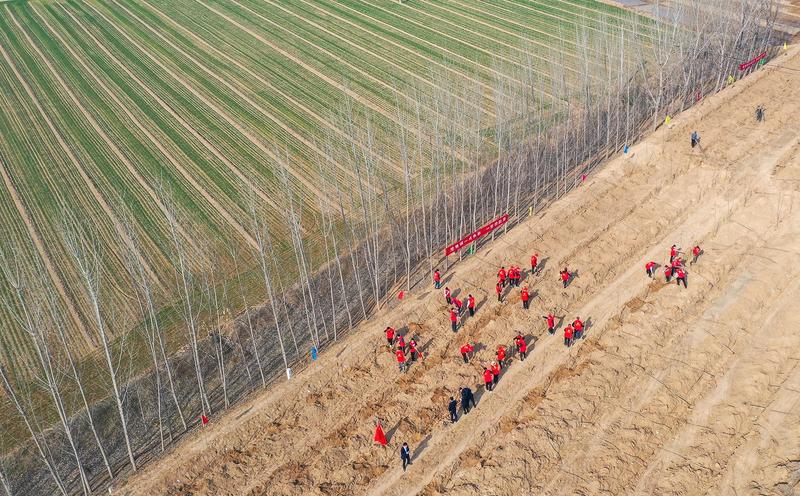 Trees are planted alongside the Yellow River in Zouping, Shandong province, in March. (DONG NAIDE / XINHUA)

In 2017, Zhu Xianping, 58, a farmer in Shaanxi province, was asked by the head of her village to help organize an event to celebrate International Women's Day.

After racking her brain for days, Zhu thought of asking volunteers to pick up trash around the Shuanghe River near Gaoping village, Shuanghe town.

Feeling a little shy at first, Zhu announced her plan to a gathering of women held by the village committee. She asked those who wanted to volunteer to write down their names and phone numbers on a piece of paper she placed on a table. Eight women signed up.

Zhu's initiative has since evolved into a voluntary campaign involving more than 2,000 people in her hometown.

The activity is just one example of the many voluntary environmental services being organized nationwide.

China is forging ahead with the construction of ecological civilization, a concept promoted by President Xi Jinping for balanced and sustainable development that features harmonious coexistence between humanity and nature.

Guided by Xi Jinping Thought on Ecological Civilization — which has as one of its 10 tenets the transformation of the Beautiful China Initiative into voluntary action for every Chinese person — voluntary environmental programs have witnessed robust development nationwide. 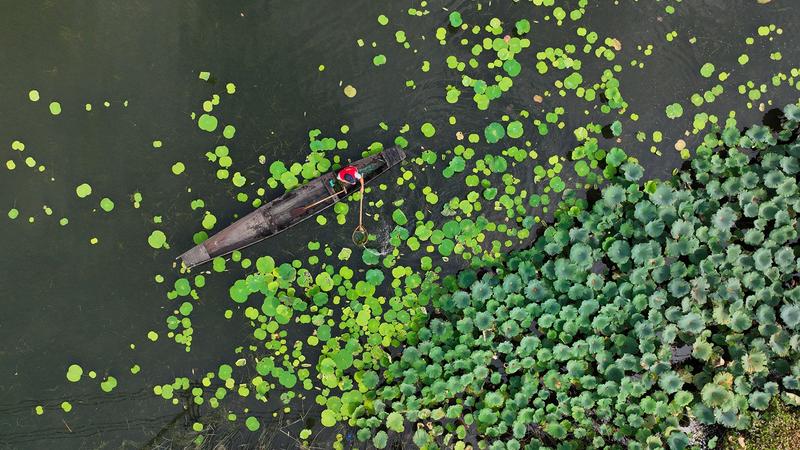 Nearly 40 percent of Chinese have taken part in such a program at least once, according to Minister of Ecology and Environment Huang Runqiu.

More than 1.3 million voluntary environmental programs have been launched across the country, representing 20 percent of all voluntary programs, Huang said at a forum in June in Shenyang, capital of Liaoning province.

The programs have become increasingly diversified, the minister stressed.

He said planting trees was one of the main voluntary environmental programs in the 1980s, but in recent years, volunteers have devoted themselves to many other activities, including river and forestry protection, biodiversity conservation, and public-interest litigation.

"Volunteer teams to promote ecological civilization have sprouted like mushrooms after the rain," Huang said.

Initially, Zhu, the farmer, only planned to make picking up trash a one-off event, but after spending more than an hour with the eight other women collecting rubbish, she commended the activity in a WeChat post.

"I thought it was very meaningful. After seeing the post, some women from other teams in my village also said they were willing to join the activity," she said.

In rural China, many villages consist of several residential blocks, with occupants in each one belonging to a team led by the village committee. 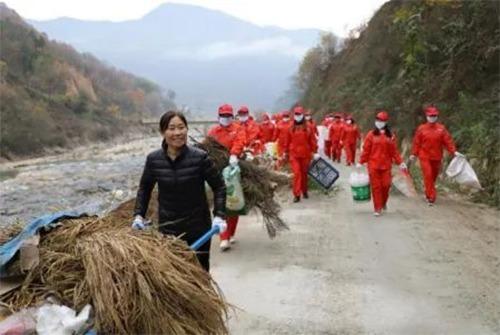 Zhu Xianping and her team pick up trash on the first and 15th day of every month. (PHOTO PROVIDED TO CHINA DAILY)

After contacting the village head, Zhu and her team decided to make picking up trash a regular activity on the first and 15th day of every month.

In July, when more than 70 villagers volunteered to join the activity, they decided to start a large-scale operation to clear a 6.5-kilometer stretch of the Shuanghe River.

The volunteers started work at around 6 am to avoid the scorching midday sun, but there was so much trash to pick up that it was 1 pm when they finished their duties for the day. Zhu was touched that many villagers brought food and drinks for the volunteers as they toiled under the fierce sun.

"The trash we collected that day was enough to fill six light trucks," she said.

Word of the voluntary efforts spread quickly, grabbing the attention of senior officials from the township government, who spoke highly of the efforts made by Zhu and her team, and decided to promote this work in the hope of encouraging more people to take part.

By late 2018, each of the township's 19 villages had set up such voluntary teams.

After consistent efforts by the teams, trash that previously could be seen almost everywhere in and around the river has all but disappeared, but Zhu said she will continue the voluntary waste-picking activities.

While the local government provides accident insurance for the volunteers, the teams also occasionally receive donations from individuals and enterprises to help with operating costs.

"With so much attention and support, I simply cannot stop," Zhu said. 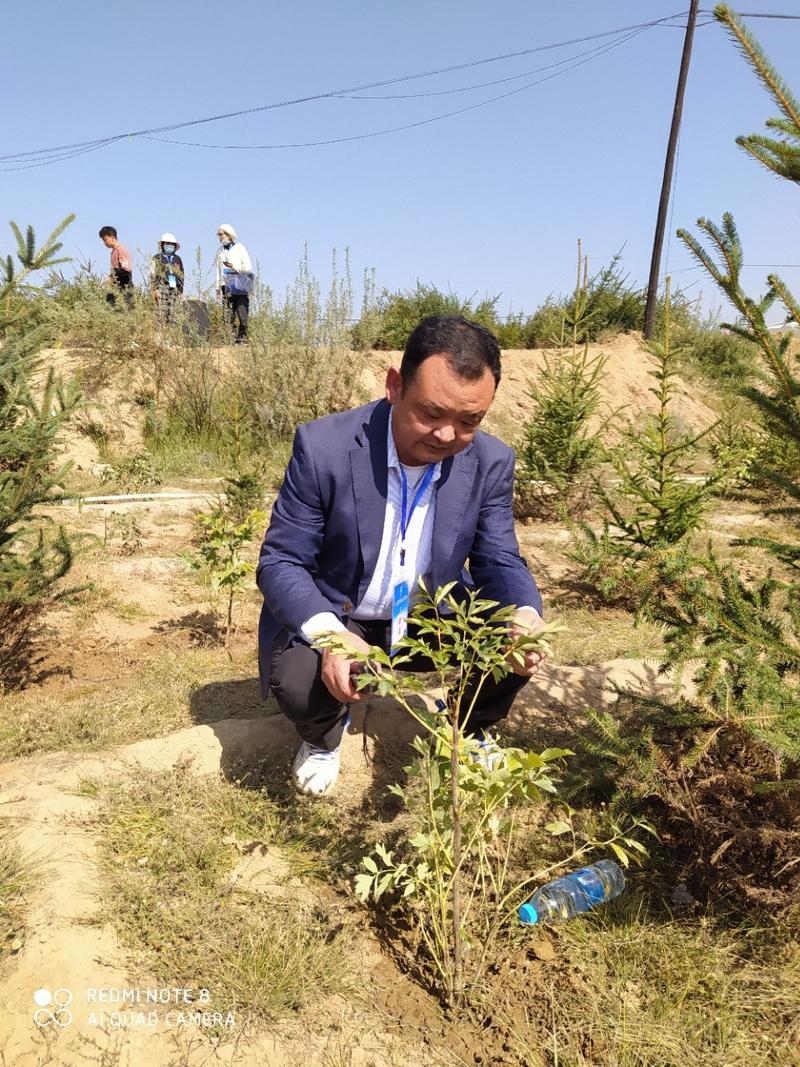 In Linxia, Gansu province, Kong Lingxi was drinking tea with a group of his friends 11 years ago, when one of them suggested making full use of their spare time to do something for the public good. The group never expected this casual conversation to inspire the passion that led to the establishment of an environmental NGO.

Kong, 51, said: "All my friends in the group have never smoked or drunk alcohol. The suggestion to make the best use of our leisure time received numerous positive responses."

Knowing that Kong's family owned a plot of wasteland in his hometown, some of his friends light-heartedly suggested that they plant trees on this land, but the idea was taken seriously by others, who believed it was a good plan.

Days later, 40 of Kong's friends headed to his hometown. "My mother treated the group with potatoes for lunch. Afterward, we planted more than 10 mu (0.67 hectares) of trees that day," said Kong, who at the time worked in the local government's labor management office.

After hearing about the group's tree-planting idea, an official from the Linxia Communist Youth League Committee asked Kong to help organize a tree-planting activity for a local school. Kong agreed, and the activity was attended by about 100 students. The voluntary work triggered even greater enthusiasm among participants after it was reported by a local television station.

Some people have traveled from Lanzhou, capital of Gansu, and neighboring Qinghai province to join other tree-planting events organized by Kong and his friends.

"It is way beyond my expectations that our tree-planting activities have since been held annually, apart from this year due to the COVID-19 epidemic," he said.

In view of the enthusiasm among participants, Kong and his friends registered an NGO, the Linxia Ecological and Environmental Protection Association, in 2014. As of last year, more than 4,000 people had taken part in the tree-planting activities, with nearly 100,000 trees taking root on 220 hectares of land. 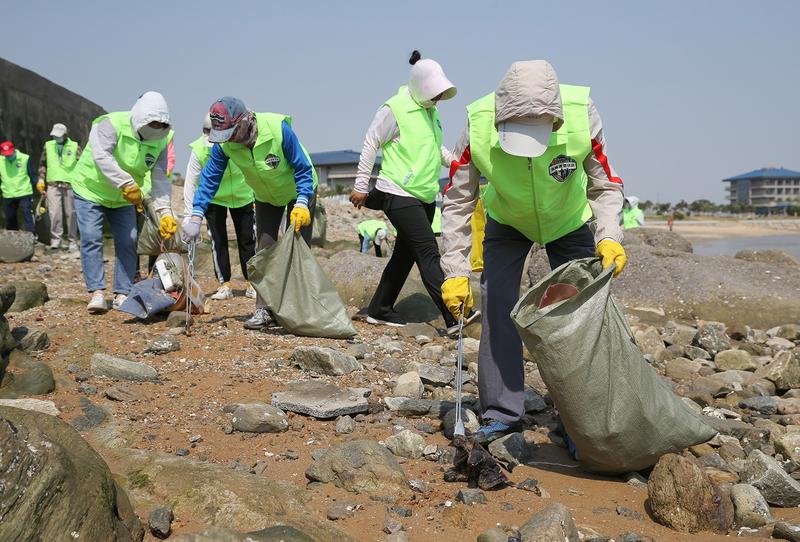 In Xianyang, Shaanxi province, Li Ping worked as a nurse, real estate saleswoman and boss of a garment store before devoting herself to promoting voluntary environmental programs.

In 2015, when she heard that a friend was launching a voluntary environmental organization with support from the local authority, the 40-year-old decided to team up with him.

Explaining her decision, she said the environmental sector will continue to boom as China attaches greater importance to preservation work.

When Li worked in real estate, as her team's monthly sales champion, she usually made 20,000 to 30,000 yuan ($2,876 to $4,311) a month. But as deputy head of her organization, which is known as the Xianyang Ecological and Environmental Volunteer Association, her monthly salary is only about 3,000 yuan.

At the start, Li had little knowledge of environmental protection, but she was able to mobilize people thanks to the communication skills she gained from her 10 years' experience of selling property.

A river at a park in Zhongguan, Deqing, is cleared by volunteers in June. (WANG ZHENG / FOR CHINA DAILY)

In motivating volunteers to help residents sort their trash, Li mainly targets seniors, as they have plenty of spare time for such work. But instead of choosing them at random, she only selects those who are influential in their communities.

"I develop good relationships with security guards and community committee officials. They know the residents well and can help acquaint me with those who are influential in their communities. This preparation makes me more efficient in my work," Li said.

She added that she has managed to persuade about 90 percent of the people she visited to voluntarily help residents sort their trash. Li said more than 200 seniors have volunteered for such work.

Her association, which now has 11 employees, mainly relies on funding from government purchases of its services. However, due to the impact of the COVID-19 epidemic, the local authority has greatly reduced such spending, resulting in financial difficulties for the association.

Despite such challenges, Li is determined to forge ahead with her work.

"The association is very much my baby. I want to see it grow gradually and healthily. I don't have unlimited strength, but as long as I remain determined, we will surely see our water become clear and our mountains covered in greenery," she said.