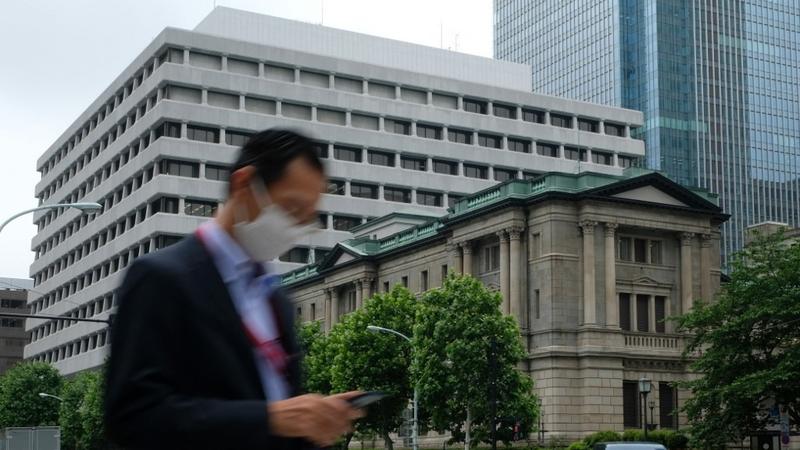 A man wearing a face mask walks past the Bank of Japan headquarters in Tokyo on May 22, 2020. (KAZUHIRO NOGI / AFP)

TOKYO - Bank of Japan Governor Haruhiko Kuroda on Tuesday stressed the need to maintain ultra-low interest rates and brushed aside the chance of reviewing the bank's monetary policy framework, an idea recently proposed by one of its nine board members.

"The BOJ is seeking to sustainably and stably achieve its 2 percent inflation target accompanied by wage growth. Our view is that this will likely take more time," Kuroda told parliament.

"It's therefore premature to discuss specifics about our monetary policy framework," he said.

Under yield curve control (YCC), the BOJ sets a -0.1 percent target for short-term interest rates and caps the 10-year bond yield around 0 percent as part of efforts to achieve its 2 percent inflation target

Kuroda made the comment in parliament, when asked about BOJ board member Naoki Tamura's recent remarks that the central bank should review its monetary policy framework and tweak its massive stimulus program depending on the outcome.

Kuroda added that the BOJ would debate an exit strategy from ultra-loose policy when achievement of 2 percent inflation comes into sight, and communicate its plan to markets at an appropriate timing.

Under yield curve control (YCC), the BOJ sets a -0.1 percent target for short-term interest rates and caps the 10-year bond yield around 0 percent as part of efforts to achieve its 2 percent inflation target.

The BOJ's aggressive bond buying to defend the yield cap has been criticized by investors as draining bond market liquidity and distorting the shape of the yield curve.

With inflation and global bond yields creeping up, markets are rife with speculation the BOJ could tweak YCC and allow long-term rates to rise more when Kuroda's term ends in April next year.

Kuroda repeated that the 3.6 percent year-on-year rise in core consumer prices in October was driven mostly by soaring import costs and that inflation would slow back below the BOJ's 2 percent target next fiscal year.

"We'll maintain our current (ultra-loose) monetary policy to make it easier for companies to raise wages," Kuroda said, adding that the benefits of the BOJ's stimulus still outweigh the costs.