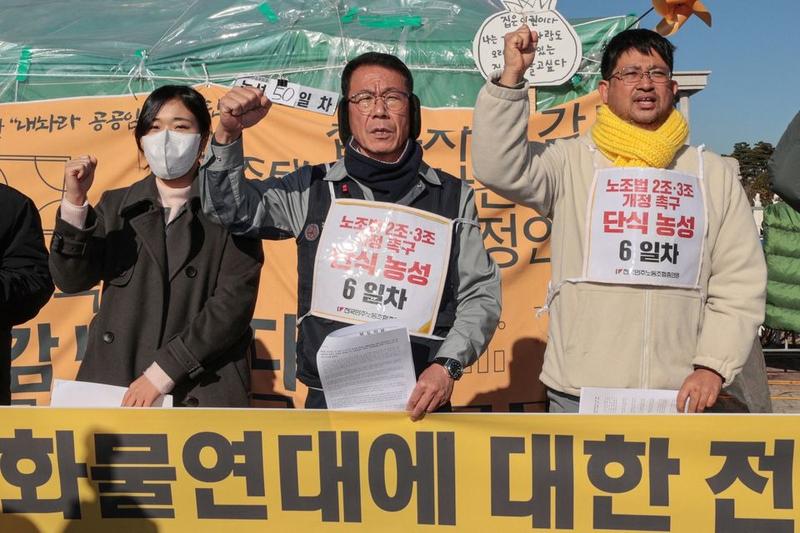 Protesters chant slogans at a news conference in support of the ongoing strike by truckers in Seoul, South Korea Dec 5, 2022. (YONHAP VIA REUTERS)

SEOUL – A nationwide strike by Republic of Korea truckers has led nearly 100 petrol stations across the country to run dry, government data show, and a national trade union said it would launch a general strike on Tuesday in support of the drivers.

The truckers' strike over a minimum pay program, which began on Nov 24, has seen two negotiation sessions between the union and the government, but so far there has been no breakthrough.

President of Republic of Korea Yoon Suk-yeol Yoon last week invoked a "start work" order, the first in the country's history, for 2,500 truckers in the cement industry

As supplies of fuel and construction materials run low, the ROK government has stepped up pressure to end the strike.

President Yoon Suk-yeol on Sunday ordered preparations to issue a return-to-work order for drivers in sectors such as oil refining and steelmaking, where additional economic damage is expected. Yoon last week invoked such an order, the first in the country's history, for 2,500 truckers in the cement industry.

The Korean Confederation of Trade Unions (KCTU), an umbrella union under which the truckers' union falls, has called the President's "start work" order the equivalent of martial law and says the government should negotiate.

The KCTU said it had planned a walkout on Tuesday to support the truckers' protests.

As of Monday afternoon, nearly 100 petrol stations had run out of fuel. About 60% of them were in Seoul and Gyeonggi province, a densely populated region near the capital, according to Korea National Oil Corp data. That is up from the 21 petrol stations that the industry ministry had said were out of fuel on Nov 28. 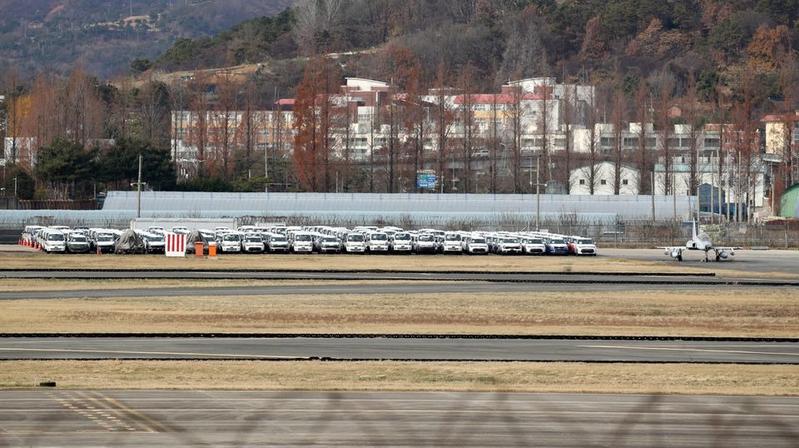 Finished vehicles are parked and wait to be delivered at an airport due to the nationwide strike by truckers, in Gwangju, South Korea Dec 5, 2022. (YONHAP VIA REUTERS)

Amid soaring fuel costs, as many as 25,000 truckers are calling on the government to provide a permanent minimum-pay system known as the "Safe Freight Rate", which was introduced temporarily in 2020 for a small portion of more than 400,000 truckers.

In their second strike in less than six months, those truckers are fighting the bitter cold and the government's narrative that they are well paid "labor aristocracy"

In their second strike in less than six months, those truckers are fighting the bitter cold and the government's narrative that they are well paid "labor aristocracy".

The impact of a general strike is unclear and depends on participation, said Han Sang-jin, a KCTU spokesperson.

Labor minister Lee Jung-sik said on Monday that a general strike would not win public support.

The strikes have disrupted ROK's supply chain, and cost more than 3.2 trillion won ($2.46 billion) in lost shipments over the first 10 days, the industry ministry said on Sunday.

Losses are expected to have grown in various industries, but traffic at ports has slightly improved to 69% of its pre-strike average since the back-to-order was issued, according to the government.